The Micro Apollo is a hot-shoe flash soft box, which fits all makes of flashguns via velcro fasteners and folds flat into a camera bag. It is designed to combat the harsh lighting of flash photography that can be a problem for most photographers.

The Micro Apollo is available in 3 different sizes:

I reviewed the smallest available version, the Micro Apollo 45, in conjunction with a Canon EOS 10D digital SLR and a Canon Speedlight 420ex flashgun, which mounts on the hotshoe. Does the Micro Apollo fulfill its promise of delivering more natural looking photographs? Find out in my review.

The Micro Apollo range is priced as follows (suggested RRP): 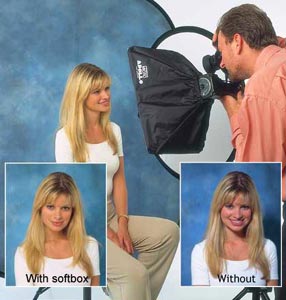 Whether using film or digital, the Micro Apollo's results show a wider and softer diffusion than the standard integral diffuser: red-eye and hot spots are reduced meaning lower contrast, more natural looking photographs all for a very affordable price.

The lightweight, fully collapsible Micro Apollo range of light modifiers are made from durable diffusion material. They are designed to pack away easily and quickly into a camera bag and will fit most makes of hot-shoe and Metz hammerhead flash guns via Velcro fasteners.

Here are 3 views of the Micro Apollo on a Canon Speedlight 420ex flashgun mounted on my Canon EOS 10D DSLR.

The ease of use of the the Micro Apollo largely depends upon which type of flashgun you are going to use it with:

From an attachment point of view, once you have stuck the supplied self-adhesive velcro strips onto your flash unit and left them to bond for 24 hours, the Micro Apollo is easy to fit. It's simply a case of attaching one of the plastic arms inside the Apollo, which has velcro on the end, to the flash unit, then attaching the other, then making sure that the whole thing sits squarely on the front of your flash unit so that the illumination is even. It's one of those things that is more difficult to explain than to actually do! When you've finished using it, the Micro Apollo folds down and is stored in the supplied polyester bag.

I decided to test the Micro Apollo against the following:

The following settings were used:

The camera was positioned about 2 feet away from the subject, at the opposite end of the room to the main source of light (window-light).

No flash is obviously much too dark, whereas direct flash is much too harsh and cold. Bounced flash gives a much softer effect, but a lot of the detail in the image is lost, such as in the reflections on the table. The Stofen Omnibounce and Micro Apollo provide the best exposures in my opinion, with the Omnibounce giving a slightly warm cast and the Micro Apollo giving the truest colours. If I had to pick one as my favourite, I would probably pick the Micro Apollo, but it's a tight decision.

The following settings were used:

The camera was positioned about 6 feet away from the (rather mundane) subject, with a window positioned on the right-hand side of the frame.

The same comments that I made in the first example can be made for the second, although this time the warmth of the Omnibounce image appeals to me more than the stark reality of the Micro Apollo. It's interesting to note that all of the direct flash methods create an ugly reflection on the green tiles; only the bounced flash reduces this effect.

The Micro Apollo fulfills all of the claims that Lastolite make; it softens the harsh light that direct flash produces, whilst producing more detail in an image than bounced flash can offer. If I was just reviewing it against these non-diffusive methods of flash photography, I would probably have awarded the Micro Apollo at least 1/2 star more than I have.

Unfortunately, I chose to include my Stofen Omnibounce in the test, and although this isn't quite as accurate in terms of colour as the Micro Apollo, its slight warmth is appealing and would be more useful for portrait photography. In addition the Omnibounce is both cheaper, a lot less obtrusive and more portable than the Micro Apollo, making it more suitable for street or reportage photography.

The Micro Apollo is marketed at the studio or wedding photographer, and in this environment I imagine that it would work excellently. For the amateur photographer, however, I feel that the Stofen Omnibounce achieves virtually the same effect and is a lot less conspicuous than the Micro Apollo, which I have awarded 4 stars precisely because it is not as versatile as the Omnibounce. Professional wedding and studio photographers may want to compare the two products more closely - for the rest of us, I think the Stofen Omnibounce is the better choice.