Dutch wildlife photography Jan Vermeer recently made an epic journey through the icy wastelands of Antarctica, accompanied by Nikon's brand new DSLR, the eagerly-anticipated D300. In our exclusive English report, Jan shares his experiences of using Nikon's prosumer DSLR camera in such an inhospitable climate, photographing the Emperor Penguins of Snow Hill Island. A passionate advocate of the Nikon D2X camera, this was Jan's first hands-on test of the new D300 - find out how it performed in one of the most beautiful and most hostile parts of our planet. 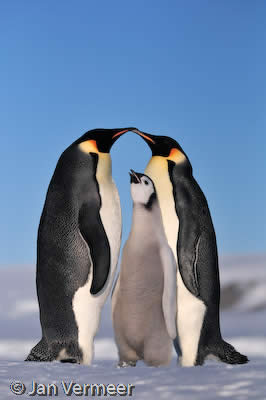 Antarctica is the driest, windiest and coldest place on earth. During the months of the dark polar winter it is not uncommon for the temperature to drop to -70°C. Under these extreme conditions life here is virtually impossible. Only the largest of all penguins, the Emperor Penguin, is able to survive. I set off for this white continent during the Antarctic spring, when the temperature starts to become more tolerable for human beings. I could not imagine a better location for trying out the new Nikon D300.

As is the case for virtually all trips to Antarctica, the expedition cruise starts from the tip of South America: Ushaia. This final piece of Argentina is the place from which the Russian icebreaker Kapitan Khlebnikov leaves. This is the only icebreaker able to venture deep into the pack ice. On this ship it is possible to reach the isolated breeding grounds of the Emperor Penguins.

The large amount of pack ice makes the trip impossible for the predominantly smaller expedition cruise ships; although ice strengthened they are unable to break the metres-thick ice. The Kapitan Khlebnikov is able to break ice up to a thickness of three metres. At a length of over 120 metres, this ship has six engines on board that combine to give 24,000 horsepower. In comparison, smaller expedition cruise ships only have a capacity of between 4,000 and 8,000 horsepower. That is a considerable difference. 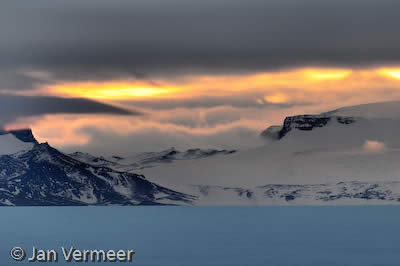 The specific goal of the expedition is to reach Snow Hill Island. A few years ago a new colony of Emperor Penguins was discovered here; one that was located closer than any other breeding grounds known up until that point. This largest of all penguins became especially famous as a result of the Oscar-winning documentary 'March of the Penguins'. Snow Hill Island is located on the eastern side of the extreme most tip of the famous Antarctic Peninsula.

This is not my first trip to Antarctica. I have already visited this fantastic white world five times before now. Knowing what to expect gives me sufficient peace of mind to be able to concentrate on the animal life and endless panoramas. I shot all my earlier trips digitally. Therefore, the type of photographic equipment that accompanies me is not so very complicated: I take everything. Since the airlines tightened up their hand baggage regulations I put all my equipment in the relatively new, and therefore less well-known, photographic backpack from Think Tank. I can fit my complete kit into this practical backpack, the 'Airport Acceleration' model. Owing to its compact outer dimensions, this bag has a less sturdy exterior than similar bags with the same inside space. 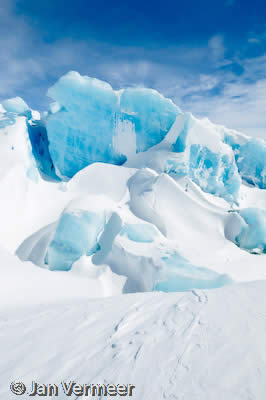 Another big advantage of this backpack is its front compartment, into which my laptop and its matching bag fit. The entire kit therefore fits into a bag that conforms to the majority of airlines' latest regulations. My trusty D2X goes along as a camera body, accompanied of course by the brand new Nikon D300. Both of these cameras also fit into the backpack; I fill the remaining space with a selection of battery chargers and cables. In the unlikely event that my hold baggage fails to arrive, I always have all the photographic equipment I need at hand. 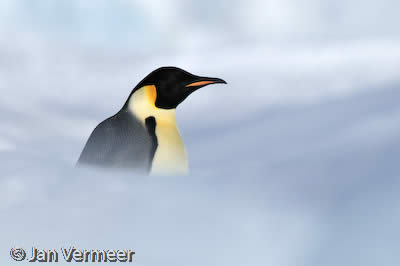 Like many others, for a long time I have been eagerly looking forward to the new Nikon D300. The similar sensor format, for which the previous models were renowned, particularly appeals to me as a wildlife photographer. The 1.5 magnifier is fantastic! This is an important factor, especially when photographing small animals in the landscape.

The Nikon D300 has many outstanding features, so I will mention several important ones here. The bigger monitor is an enormous improvement: 920,000 pixels on the generous three-inch format is fantastic! The new LiveView shooting mode with autofocus function works excellently; this really is a great enhancement. Although I have not used it much during this trip, I will certainly be using it more often, especially for macro photography. In addition to the vastly improved autofocus system with 51 focus points, the Self-cleaning Sensor Unit is a huge bonus for the photographer on location. Also, the speed of six frames per second and eight with the optional battery pack (which, unfortunately, was not available for this trip) provides a wealth of opportunities for the photographer for whom speed is a must. 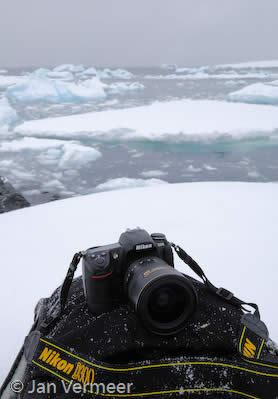 My first day on the ice with the new Nikon D300 at the ready goes surprisingly easily. The camera is easy to operate and lies well in the hand. Despite two layers of gloves, I am still well able to operate the controls. Fortunately, the control buttons remain unchanged in respect to those I am familiar with on the D2X. The screen is fantastic on location; the far greater surface area makes judging the image shot a lot easier. Despite the bright light the photo can be viewed clearly. I do need to shield the screen sometimes, but this is unavoidable considering the intensity of the Antarctic light.

During photography on the ice, sometimes for an entire day, I usually only use the Nikon D300. I will certainly be doing so now that I can make use of the Self-cleaning Sensor Unit, which works fantastically. The menu has four settings and I select the Start & Close option. This cleans the sensor when the camera is turned on and off. During photography the conditions in Antarctica are diverse; the sun is bright during the first few days and the temperature is around freezing point. The camera encounters no problems with the white tones that are obviously inherent to this white world. Even so, I still prefer more extreme weather conditions. A heavy blizzard with dark skies creates a far more dramatic landscape. These are the conditions from which the most beautiful photos often arise. 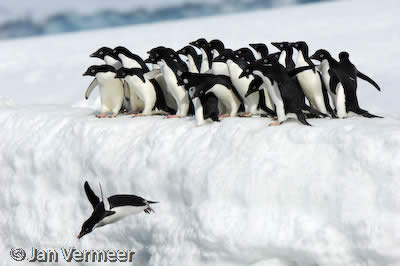 Fortunately, the temperature also drops way below freezing on several days. It is -20°C and the Nikon D300 is totally oblivious to the forces of nature. The camera also withstands the damp caused by the snow flurries without problem. Even though I have brought along several batteries, one battery is enough for an entire day's photography in the cold. Incredible! The autofocus does its job more than satisfactorily; penguins might not walk very fast but even with the limitations caused by the contrast in the landscape the camera tracks its subject unerringly. Also, the flying albatrosses and Cape Doves are followed perfectly in the viewfinder.

One the most important new features relates to noise or more aptly put: the absence of noise. The predominant light conditions meant that I was able to shoot almost everything on the 200 ISO setting. A photo taken during the evening in Buenos Aires on the 2000 ISO setting shows an amazing result. Where 400 ISO was quick to display noise beforehand, the D300 makes this a thing of the past. This is probably one of the most important features and one for which many a photographer has been waiting for years. The camera lies exceptionally pleasantly in the hand and is great to operate; even while wearing gloves it was perfectly manageable.

The features of this camera are really something and Nikon has launched an absolutely first-class camera in the market with the Nikon D300.

Support PhotographyBLOG: Buy the Nikon D300 from one of our affiliate retailers: