The Olympus IS-500 is an all-in-one SLR camera; it looks and acts like a traditional 35mm SLR, but the lens is built-in and cannot be detached. So the IS-500 is a cross between a compact camera, in that it has a fixed lens, and a 35mm SLR camera, with the creative control that the SLR format offers. The fact that the lens is fixed may put you off this camera straight away, but for a lot of people it is much more convenient than carrying around a bag full of lenses. So can the IS-500 offer the best of both worlds - convenience and quality? Read on to find out.

You can buy the Olympus IS-500 from PhotographyBLOG's recommended retailer, Pixmania.co.uk, for only £122 / 184,52 € (the exact price depends upon the country that you live in).

The lens on the IS-500 is a 28-120 mm, f4.9-f6.8 zoom lens. It's certainly not the fastest lens in the world and a bit short at the telephoto end, but you can add an optional 1.3x teleconvertor which will stretch the focal length to a more respectable 156mm. That's more than adequate for portraits and maybe even a bit of candid street photography. The lens accepts inexpensive 52mm filters.

The IS-500 doesn't offer the full range of exposure modes that 35mm SLRs usually have. It has a range of automatic modes including Program AE: Full-Auto, Stop Action, Portrait, Night Scene, Landscape, and then offers Aperture-Priority AE and Long Time (manual) as the more advanced modes. There is no shutter speed priority or fully manual mode. Exposure compensation, where you can over-ride the exposure that the camera has set, is available in 1/2 steps up to 2EV above or below the recommended exposure.

One of the main strengths of the IS-500 when you compare it to conventional compact cameras is its flash performance. There are 4 flash modes available; Auto Flash (Automatic flash activation in low-light, backlight and fluorescent light), Red-Eye Reduction Flash (same as Auto otherwise), Fill-in (forced activation) and Super FP activation. The last one, Super FP, is perhaps the most interesting, as it allows full flash-shutter synchronisation up to 1/2,000 second in Portrait Mode. Otherwise the IS-500 is limited to a maximum synchronisation speed of 1/100th second.

The IS-500 has an impressive range of metering options, with TTL light metering system, ESP light metering, centre-weighted average light metering and spot metering all available. As the IS-500 is aimed at beginners to SLR photography, film loading, advance and rewind are all automatically handled by the camera. There is an LCD panel on the back of the camera which displays all relevant settings, and the optical viewfinder displays the Autofocus frame, Spot frame, Autofocus indicator, Flash indicator (also used as flash warning)and Exposure compensation / overexposure / underexposure warning. Unfortunately the viewfinder only covers 85% of the actual scene; I'd have liked this to be at least 90%.

I must admit that I've never even seen one of these types of camera before, so using the IS-500 was always going to be a novel experience.

The IS-500 handles like a traditional 35mm SLR. It has the same overall shape, dimensions and weight in the hand. There are a couple of fundamental differences, however, starting with the built-in zoom lens. There is no zoom ring on the lens at all; instead you use the rocker switch which sits just under your thumb on the right-hand side of the camera to zoom the lens from wide to tele, and vice-versa. This system of zooming works surprisingly well and I didn't really miss the lack of a zoom ring, due in part to the rocker switch being perfectly positioned under my right thumb.

Unfortunately the zoom lens is very noisy in operation, both when it extends itself after the camera is turned on, and when it's zoomed in and out. The camera makes a kind of high-pitched screeching sound that you have to hear to believe. It's also quite slow, taking a couple of seconds to extend from the wide 28mm setting to the long 120mm setting.

The second major difference is the positioning of the exposure dial, which usually sits on top of a typical 35mm SLR body. The IS-500 does have a control dial on the top-left of the camera, but it only turns the camera on and off and pops-up the built-in flash unit when required. Instead the exposure modes are accessed via a round dial on the rear of the camera, with a button in the middle to select Full Auto mode and four positions around that button to select the other main exposure modes.

You can set the aperture value on the IS-500, but this is where the camera shows its true colours, in that it is aimed squarely at people who are new to SLR photography. The aperture is set via a rather fiddly button and switch, marked A/L.T. You press the button to choose between Aperture, Long Time and the default Full Auto exposure modes, then push the switch up or down to move through the available apertures. It took me a bit of time to work out how the aperture was set, and I got the impression that this aspect of the camera was designed to prevent people from using it, rather than encouraging them to do so.

This may be because there are only a limited number of settings available to choose from when the IS-500 is used in Aperture mode or Long Time mode. For example, the range of apertures is 4.9, 5.6, 8.0, 11, 16 and 22 when the lens is set to its widest angle, and 6.8, 8.0, 11, 16 and 22 when set to it's longest. In Long Time mode, you can set the shutter speed, but only for exposures of between 1-60 seconds. Somewhat bizarrely there is no equivalent mode on the IS-500 to the normal shutter-speed priority mode that 35mm SLRs have.

There aren't too many other settings left to explain. Exposure compensation, self-timer, remote control, macro and flash/redeye are all set by a vertical row of rather small buttons on the left of the LCD screen which displays the current settings. The only other control on the cameras is one of its most notable. The IS-500 has a spot meter button positioned between the shutter button and the zoom rocker switch. I'm not really sure why Olympus have added a spot meter function to what is a beginner's camera, but it's a welcome addition that helps in tricky lighting conditions, providing you understand how to use it.

I used Kodak Royal Supra ISO 200 print film during the Review and had the film processed at The Strand, London branch of Jessops.

As this is a review of the Olympus IS-500 camera, rather then Kodak Royal Supra film, I'll concentrate on the aspects of image quality that are directly attributable to the camera.

The IS-500 got the exposure right in just about all of the test shots that I took, with detail retained in both the shadows and the highlights. This is probably due in part to the use of print film during the review, as print film has a lot more exposure latitude than transparency film. I chose to use print film because that is what most owners of this camera will choose to use. 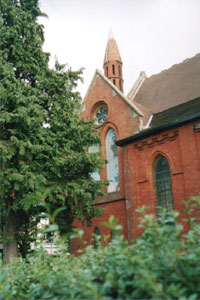 The camera handled tricky lighting situations well. The bright sky in the photograph shown on the left initially fooled the Olympus µ[mju:] 400 Digital camera that I reviewed last week; it only got the exposure right when I used the Spot mode to take a reading off the building. The digital camera was fooled by the bright sky and under-exposed the building, creating a silhouette. The IS-500 was not fooled by the bright sky, even though this photo was taken using its default metering mode. Instead the IS-500 has gone slightly the other way, retaining detail in the building at the expense of bleaching out the colour in the sky.

The Olympus IS-500 produced well-exposed prints in the bright, sunny outdoor conditions in which this Review was conducted. The lens delivered sharp images with little noticeable barrel or pin-cushion distortion at either end of the 28-120mm zoom range. The built-in flash unit also produced a nice even exposure when required. Overall I was more than happy with the images that the combination of the IS-500 camera and Kodak Royal Supra film delivered.

I scanned all of the prints on my Black Widow 4830 Pro flatbed scanner at 72 dpi using the default settings. This initially created a problem - all of the scans were far too dark. To give you a better idea of what the prints actually look like, I used the Levels tool in Photoshop to set the midtones of each print to a setting of 1.50, so that the Input Levels was set to 0 ; 1.50 ; 255. I then cropped them, resized them to 300x200 pixels and saved them for the Web as JPEGs with a Quality setting of 60.

The IS-500 is a pleasant enough camera to use and delivers satisfying images, but I can't help wondering exactly who it's aimed at and who will actually buy one. The IS-500 is too advanced, complicated and heavy for people who just want a pocketable point and shoot camera, while it's not advanced enough to satisfy those people who are stepping on the path to becoming photographers.

The lack of shutter-speed priority and manual modes, complete with a rather weak aperture-priority mode, means that most of the fundamental creative photographic controls are missing or hamstrung. Once a user has grown out of using the various program modes and wants to exert more control over their photography, they will be forced to buy a new camera. This wouldn't be too bad if all camera manufacturers followed the same marketing strategy, but unfortunately for the IS-500 most similarly-priced, entry-level 35mm SLR cameras usually offer a range of program modes and the more advanced creative ones.

The same criticism also applies to the lens used on the IS-500. The 28-120 mm, f4.9-f6.8 zoom lens is certainly wide-enough for the beginner market that the camera is aimed at, but the 120mm maximum zoom will prove restrictive in certain situations, as will the rather slow lens (especially at the telephoto end). Again the 35mm SLR camera, with its interchangeable lens system, will offer more versatility in the long-run, yet still allow the fledgling photographer to start with a cheap and cheerful 28-80mm zoom lens, which will probably be faster and of similar or better quality than the IS-500's lens.

So the IS-500 does offer convenience and quality, but ultimately at the expense of several other important facets of photography, namely creativity, versatilty and expandability. The IS-500 may be a stepping-stone for many budding photographers, but I can't help thinking that it will be one that they step on very quickly before moving on to the next, or one that they should perhaps have leapt across and not stepped on at all.

You can buy the Olympus IS-500 from PhotographyBLOG's recommended European retailer, Pixmania.com, for only £122 / 184,52 € (the exact price depends upon the country that you live in).