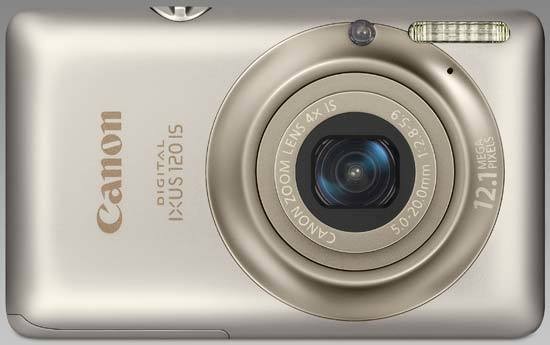 The Canon Digital IXUS 120 IS (also known as the PowerShot SD940 IS Digital ELPH) is the slimmest ever IXUS / ELPH camera. Measuring 20mm thick, the 12 megapixel Canon 120 IS compact camera also offers a 4x optical zoom lens with an wide 28mm setting and Optical Image Stabilization, 2.7 inch LCD screen, 720p HD video with an HDMI output connection, Smart Auto mode with Scene Detection Technology, and a useful Hints & Tips feature for beginners. Available in four colours - black, blue, brown or silver - the Canon Digital IXUS 200 IS is out now for £299.00 / €349.00 / $299.99.

Long before they went DSLR and super zoom crazy, consumers were buying cute little credit card sized Canon Digital IXUS compacts, offspring of its short-lived APS film camera range. Almost ten years down the line since their introduction, the latest, most compact incarnation of the IXUS is with us in the elegantly designed 120 IS - that suffix indicating optical image stabilization, with three user selectable anti shake modes offered.

This 12.1 megapixel model been heralded by its manufacturer as its slimmest wide-angle lens compact to date at 20mm in depth; so - following the original principle of the panoramic print producing APS range - could this be the perfect pocket camera for travelers to capture those natural vistas in glorious detail?

Here how the camera looks is as equally (if not more) important as how it handles and ultimately performs. From the beginning the IXUS family has been as much about fashion and form as internal feature set - style in perfect equilibrium with substance - and so, 28mm 4x optical zoom lens aside (equivalent to 28-112mm), the Canon Digital IXUS 120 IS predictably comes with a choice of different body colours: black, blue, brown or silver, thankfully subtly rather than garishly implemented.

We had the attractive chocolate brown in for testing, which, when sitting on the desk in front of us, had us subconsciously craving the sweet stuff. So is the 120 IS really good enough to eat?

At £299 it's not exactly the cheapest dish for those with an appetite for a reliable, beginner-friendly snapper for their handbag or top pocket. But then the metal-bodied IXUS range has always positioned itself as a premium brand that users might aspire to owning. And, with battery and card loaded, the latest Canon offering feels reassuringly weighty in the palm despite a body only weight of just 120g, and likewise well constructed, mixing metal and well-disguised plastic to winning effect.

Despite the small form factor, Canon has provided an adequately large 2.7-inch, 230k dot resolution LCD screen at the rear of the 120 IS (up from the IXUS 100 IS' 2.5-inches) for composing and reviewing shots in the absence of a traditional viewfinder like the one found on its predecessor. The screen on its own works well, though sunlight still proves an occasional nemesis.

In common with competitors the camera offers its own take on intelligent auto functionality pioneered on Panasonic's Lumix compact range - here named Smart Auto mode with Scene Detection technology. This enables users to simply point and shoot, the camera recognizing scenes and subjects then adjusting its parameters accordingly so all the photographer has to do is fully depress the shutter release button to go on and take the shot.

At this beginner friendly end of the market, that's arguably all you want: a camera that takes usable images with the minimum of fuss and user input. Further hand holding features include the expected face detection, auto red eye removal plus blink detection - flagging up the fact that your subject has their eyes closed so you can take a replacement shot at the time - plus 'hints and tips' prompts within the provided on-screen menus.

Built in motion detection technology also purports to detect movement of camera and subject, boosting ISO settings accordingly (up to ISO1600 offered here) to prevent blurred images. The Canon range staple feature of iContrast likewise makes an appearance to ensure images don't suffer from blown highlights or overly dark foreground detail when faced with tricky exposures. For those interested in close ups and still life photography, the camera's macro mode allows focus as close as 3cm from a subject - again more than adequate given the IXUS' intended audience of 'status seekers'.

Video you say? Well the Canon Digital IXUS 120 IS provides high definition footage, even if at 1280x720 pixels rather than the Full HD 1920x1080. Unusually though - and as with its 100 IS predecessor - there's a port for HDMI (High Definition Multimedia Interface) provided alongside the regular USB/AV out port.

It's not all good news though. The optical zoom isn't accessible when shooting movies, pressing its toggle switch will only effect an equivalent 4x digital zoom, the lens itself staying put. So by using it you're compromising on quality. Approximately 10 minutes of HD footage will fit on a 4GB card, frame rate a commendably smooth 30 frames per second (fps).

With the Digic 4 processor on board the Canon Digital IXUS 120 IS proves a zippy performer. With a press of the small, recessed top plate power button the camera readies itself for action in just under two seconds, writing images to optional SD or SDHC media cards in a tad under three, with, unusually, no internal capacity - however modest - to fall back on. Post-capture the screen momentarily freezes displaying the captured image. The camera takes a moment or two to determine focus exposure, AF point highlighted in green with a beep of affirmation when it has done so. So, neither particularly quick nor slow but perfectly adequate for its class.

At the front, as with its forebears, the camera is an exercise in minimalism - metal surface silky smooth to the touch and lens barrel squirreled away within the body when inactive - whilst at the same time recalling 'classic' IXUS design of the series' APS incarnation. But while it looks similar to the previously released IXUS 100 IS, it's not its doppelganger.

Top right of the lens is a thin lozenge shaped sliver of a window housing the integral flash - its location meaning it's in danger of being obscured by a finger when holding the camera in both hands - whilst below is a barely discernable pin prick housing the built-in microphone.

Directly above the optic is a porthole-shaped window housing the indicator light for the self-timer/AF assist lamp. Other than that, and the forward protruding 'lip' of the zoom lever surrounding the shutter release button on the top plate, the IXUS maintains its 'clean' lines, a gentle curve to the surface running from left to right, top to bottom.

The top plate of the Canon Digital IXUS 120 IS is similarly fuss free yet sophisticated; controls on our brown review sample set into a darker coloured strip that encircles the exterior of the camera so that none of the buttons actually protrude and spoil this IXUS' straight lines.

Indeed, as we noted in our review of the IXUS 100 IS earlier this year, the shutter release button has had one of its rounded corners tapered to 'fit' the narrower depth. It's encircled by a spring loaded zoom lever with a small lip protruding to the front where it falls handily under the pad of your forefinger for quick operation. The zoom itself responds quickly yet smoothly as regards the transition from wide angle to maximum telephoto - a process taking two seconds at most.

Moving along the top plate to the left we find the aforementioned much smaller on/off power button, and, to the left again, a row of three holes for the camera's built-in speaker. While the left hand side of the camera - if viewed from the back - is devoid of any features apart from small screws top and bottom, the right hand side adds merely a means of attaching a wrist strap. This again apes its predecessor in the 100 IS.

Things get slightly more interesting with an examination of the back plate, dominated as expected by that aforementioned 2.7-inch LCD monitor, which provides an image slightly on the warm side. I didn't really miss the lack of an optical viewfinder this time around, since on the IXUS 100 IS it was small and murky. The rear controls themselves - though small - are still sufficiently large to ensure operation remains fluid.

The top right hand corner of the IXUS' back plate features a clever incorporation of A/V out, USB and HDMI connections, in that the plastic cover protecting them forms part of the design, flipped open by your thumbnail and then clicked firmly back into place.

Beneath this is a three-notch slider switch for the Canon Digital IXUS 120 IS's various shooting modes, easily operated by your thumbnail, that mirrors that provided on the previously released IXUS 100 and 110 IS cameras. Running from top to bottom are the unit's aforementioned 'smart' auto mode, regular program auto and, lastly, video mode. It's the only control on the camera back that isn't neatly flush to the body.

Neatly mirroring the shape and size of this control, and ranged to the left, is a familiar playback button, while below is a four way directional control pad for tabbing through menu options and captured images, with a familiar Canon function/set button at its centre.

Press the latter when in basic auto shooting mode and a minimal icon-led toolbar appears down the left hand side of the screen, instead of the L-shaped toolbar of previous generation models. Here we get the chance to influence image size and resolution and that's it. Flick the slider switch down a notch to program shooting mode however and many more user selectable options present themselves.

Here you can tab down from program and select one of the camera's additional built-in scene modes. Each time one of the options - from portraits to kids and pets, fireworks, aquarium and ISO3200 equivalent low light mode - is highlighted, a small box of text appears alongside instructing the user as to the benefits of and uses for the proposed settings. So there's nothing to confuse beginners here.

Returning to the control pad just below the mode switch, we find located at north, south, east and west points are, in that order, a means of adjusting exposure compensation (+/- 2EV), while next, at the bottom of the pad, is a means of deleting unwanted images, or selecting the self-timer options. The ability to choose from the flash settings (auto, on, slow synchro, off) and switch focus from infinity to macro (and back) complete the package.

Beneath these, again features shared with the IXUS 100 IS, are a self-explanatory final pairing of buttons - marked 'display' (with a press turning off the shooting icons littering the screen) and 'menu' respectively. Pressing the latter brings up two folders on-screen - the first containing the shooting menu, the second the more general purpose set up menu.

The first folder offers ability to activate the digital zoom, call up grid lines or a 3:2 format ratio guide on screen, activate i-Contrast, image stabilisation modes (continuous, shoot only, active when panning, or off), plus face and blink detection.

The second available folder contains the set up menu, offering the ability to tweak various sound and start up options - unlike previous generations of Digital IXUS, there's not a rather unnecessary separate menu folder for doing this - plus format the SD or SDHC card in use. The more experienced user can also turn off the aforementioned 'hints and tips' speech bubbles if they prove too much as well as manually adjust LCD brightness or reset all settings.

The base of the camera meanwhile features a standard screw thread for attaching this IXUS to a tripod, plus a sliding door protecting both the SD/SDHC card port (with no internal memory to fall back on) and slender build rechargeable lithium ion battery, good for an underwhelming but not disastrous 220 shots from a single charge - a fraction better than the IXUS 100 IS' 210 images.

With style at the forefront of the marketing push for the Canon Digital IXUS 120 IS, does the camera show an equal emphasis on substance when it comes to what really counts; namely the images produced? Read on for more…