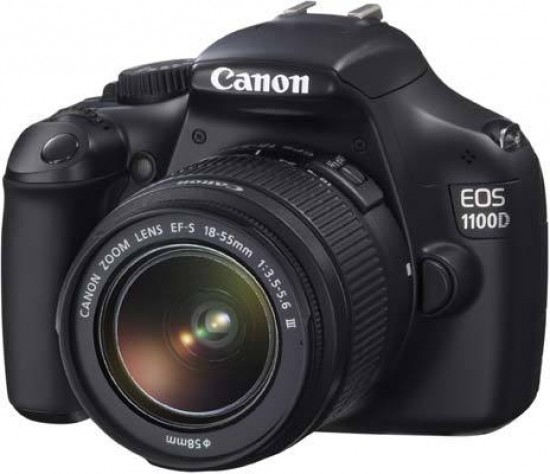 The Canon EOS 1100D produced images of excellent quality during the review period. This camera produces noise-free images at ISO 100 all the way up to ISO 1600, with some noise appearing at ISO 3200 and more at the fastest setting of 6400. Image stabilisation via the kit lens is a feature that helps the EOS 1100D keep up with its competitors, and one that works very well when hand-holding the camera in low-light conditions or when using the telephoto end of the zoom range. The Canon EOS 1100D dealt very well with chromatic aberrations, with limited purple and cyan fringing effects appearing only at the edges of the photo in high contrast situations.

The 12 megapixel images were a little soft straight out of the camera at the default sharpening setting and ideally require some further sharpening in an application like Adobe Photoshop, or you can change the in-camera setting. The built-in flash worked well indoors, with no red-eye and good overall exposure. The night photograph was very good, with the maximum shutter speed of 30 seconds and Bulb mode allowing you to capture enough light in all situations.

ISO sensitivity can be set between ISO 100 and ISO 6400 in full-stop increments. Here are some 100% crops which show the noise levels for each ISO setting, with JPEG on the left and the RAW equivalent on the right. The RAW files were developed with Canon's Digital Photo Professional (3.10.0.0), using the software's default settings and noise reduction set to 0.

The Canon EOS 1100D / Rebel T3 has 2 different JPEG file quality settings available, including Fine and Normal, with Fine being the higher quality option. Here are two 100% crops which show the quality of the two options.

The EF-S 18-55mm f/3.5-5.6 IS kit lens handled chromatic aberrations well during the review. The examples shown here at 100% represent the absolute worst results you can expect from this lens mated to the EOS 1100D / T3.

The flash settings on the EOS 1100D / T3 are Auto, Manual Flash On/Off, and Red-Eye Reduction. These shots of a white coloured wall were taken at a distance of 1m.

The Canon EOS 1100D's maximum shutter speed is 30 seconds and there's a Bulb mode for even longer exposures, which is excellent news if you're seriously interested in night photography. The shot below was taken using a shutter speed of 30 seconds, aperture of f/8 at ISO 100. Here is a 100% crop of the image to show what the quality is like.

The Canon EOS 1100D's EF-S 18-55mm f/3.5-5.6 IS kit lens offers image stabilisation, which allows you to take sharp photos at slower shutter speeds than with lenses that lack this function. To test this, I took 2 handheld shots of the same subject with the same settings. The first shot was taken with Image Stabilisation turned off, the second with it turned on. Here are two 100% crops of the images to show the results. As you can see, with Image Stabilisation turned on, the images are much sharper than with anti-shake turned off. This feature really does seem to make a difference and could mean capturing a successful, sharp shot or missing the opportunity altogether.

Creative Auto has been extended with the introduction of Basic +. Essentially a more extreme version of the well-established Picture Styles, this offers nine options including Standard, Vivid, Soft, Warm, Intense, Cool, Brighter, Darker and Monochrome, all of which can be interactively tweaked to suit your taste.

Auto Lighting Optimizer performs in-camera processing to even out the contrast and correct brightness. There are now 4 different settings - Off, Low, Standard and Strong.

Peripheral Illumination Correction, first seen in the EOS 500D, is an in-camera solution designed to reduce the effect of light fall-off in the image corners. It works, though the difference is not night and day.