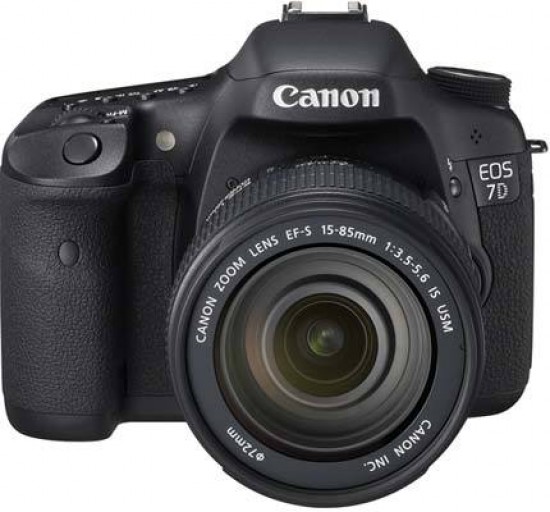 All of the sample images in this Review were taken using the 18 megapixel Fine JPEG setting, which gives an average image size of around 7Mb.

The Canon EOS 7D produced images of outstanding quality during the review period. This camera produces noise-free images at ISO 100 all the way up to ISO 1600, with some noise appearing at ISO 3200 and particularly the fastest settings of ISO 6400 and 12800. The Canon EOS 7D's EFS 18-135mm f/3.5-5.6 IS kit lens dealt very well with chromatic aberrations, with limited purple and cyan fringing effects appearing only at the edges of the photo in high contrast situations. Image stabilisation via the kit lens is a feature that means the EOS 7D works very well when hand-holding the camera in low-light conditions or when using the telephoto end of the zoom range. Note that there is some significant barrell distortion at the wide end of the focal range. The 18 megapixel images were quite soft straight out of the camera at the default sharpening setting and ideally require some further sharpening in an application like Adobe Photoshop, or you can change the in-camera setting. The built-in flash worked well indoors, with no red-eye and good overall exposure. The night photograph was very good, with the maximum shutter speed of 30 seconds and Bulb mode allowing you to capture enough light in all situations. Picture Styles provide a quick and easy way to tweak the camera's JPEG images, while the Auto Lighting Optimizer and Highlight Tone Priority also help to get the most of JPEGs.

There are 8 ISO settings available on the Canon EOS 7D. Here are some 100% crops which show the noise levels for each ISO setting, with JPEG on the left and the RAW equivalent on the right:

The Canon EOS 7D has 2 different JPEG file quality settings available, with Fine being the highest quality option. Here are some 100% crops which show the quality of the various options, with the file size shown in brackets.

Here are two 100% crops which have been Saved as Web - Quality 50 in Photoshop. The right-hand image has had some sharpening applied in Photoshop. The out-of-the camera images are a little soft at the default sharpening setting and benefit from some further sharpening in a program like Adobe Photoshop. You can also change the in-camera sharpening level to suit your tastes via the Picture Style options.

The Canon EOS 7D's EFS 18-135mm f/3.5-5.6 IS kit lens handled chromatic aberrations very well during the review, with some limited purple and cyan fringing present around the edges of the frame in particularly high-contrast situations. Here are some 100% crops which show the typical chromatic aberrations that you can expect:

The flash settings on the Canon EOS 7D are Auto, Manual Flash On/Off, and Red-Eye Reduction. These shots of a white coloured wall were taken at a distance of 1.5m.

And here are some portrait shots. As you can see, neither the Flash On setting or the Flash On + Red-eye option caused any amount of red-eye.

The Canon EOS 7D's maximum shutter speed is 30 seconds and there's a Bulb mode for even longer exposures, which is excellent news if you're seriously interested in night photography. The shot below was taken using a shutter speed of 30 seconds, aperture of f/8 at ISO 100. I've included a 100% crop of the image to show what the quality is like.

The Canon EOS 7D's EFS 18-135mm f/3.5-5.6 IS kit lens offers image stabilisation, which allows you to take sharp photos at slower shutter speeds than other digital cameras. To test this, I took 2 handheld shots of the same subject with the same settings. The first shot was taken with Image Stabilisation turned off, the second with it turned on. Here is a 100% crop of the image to show the results. As you can see, with Image Stabilisation turned on, the images are much sharper than with anti-shake turned off. This feature really does seem to make a difference and could mean capturing a successful, sharp shot or missing the opportunity altogether.

Canon's Picture Controls, similar to Nikon's Picture Styles, are preset combinations of different sharpness, contrast, saturation and colour tone settings. The six available Picture Controls are shown below in the following series, which demonstrates the differences. There are also three User Defined styes so that you can create your own look.

This custom setting promises to improve the highlight detail of the image by expanding the dynamic range from 18% grey to bright highlights. Turning it On didn't make a great deal of difference in our test shot, as shown below.

This custom setting promises to automatically correct the brightness and contrast of an image, with four levels of varying intensity available. There was a slight difference between the weakest and strongest settings, as shown below. Note that the user guide warns that this setting might cause noise to increase.