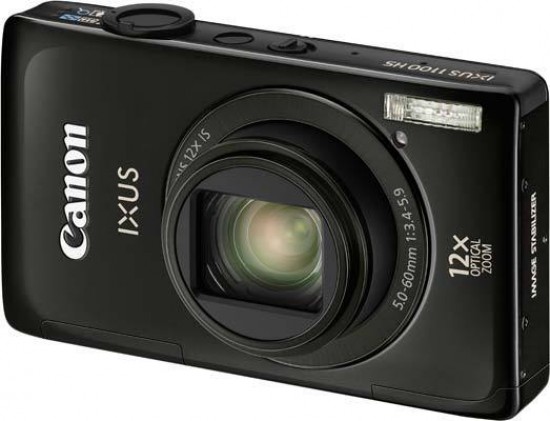 The IXUS line of Canon digital compact cameras has been synonymous with excellent optics and build quality since the days of APS film when the first one appeared. Now, IXUS is regarded as the luxury brand of Canon's digital compacts. Priced higher than the Powershot counterparts, the cameras are usually more solidly built, look great, have good lenses and screens and a high price to match. The Canon IXUS 1100 HS (also known as the Powershot ELPH 510 HS) doesn't fail in the looks department and it's coupled with a 12x optical zoom, 3.2 inch LCD touchscreen, 12.1 megapixel back-illuminated CMOS sensor, full 1080p HD video with stereo sound, and a DIGIC IV processor. Priced at £369 / €429 / $349, the Canon IXUS 1100 HS is available in red, silver or black.

The Canon IXUS 1100 HS is available in three colours but we got hold of the red version to test. It's a darker red - bordering on plum - and the paint has a glossy shine to it. The body appears to be wider than the average IXUS model but only by a few millimetres. The lens is more centralised than other digital compact cameras with the slim flash sitting over the left corner of the lens.

On the top of the body is a small switch for flicking between easy auto mode and program. In program, you can also select scene modes which can't be done in auto. The shutter release button is surrounded by the zoom switch which operates the 12x optical zoom. In 35mm terms, that 12x optical zoom starts at 28mm and finishes at 336mm which is pretty good for a slim camera like this.

On the back of the IXUS 1100 HS, Canon have been able to do away with all the buttons and integrated everything into the touch-screen. The only button present is to playback pictures you've already taken.

Arguably the most interesting area of the camera's exterior is on the bottom. A typical marque of distinction is in the build quality of the tripod bush. The IXUS 1100 HS has a metal type meaning Canon see this as a high specification camera. It's an interesting thing to use as a bench mark. Usually the card and battery share a compartment but on the Canon, they've been separated to opposite ends of the body. The small NB-9L lithium-ion battery is a long semi circular shape and slots in next to the tripod bush. The IXUS 1100 HS takes SD, SDHC and SDXC memory cards for ultra high capacities.

Taking a look under the bonnet, the Canon IXUS 1100 HS's sensor is a CMOS back illuminated type. If you've never come across this technology before, it's designed to make the camera more responsive in low light. It works by removing all the circuitry that normally surrounds each pixel onto the back of the sensor. Because it looks like it's been fitted backwards, the sensor looks like it's being illuminated from the back.  Couple this technology with a relatively low resolution by today's standards and the ISO performance should be good in the test later on.

The Canon IXUS 1100 HS doesn't use the whole area of the screen for shooting unless you're in the 16:9 aspect ratio. The resolution will alter depending on the ratio you choose. We flicked between 3:2 and 4:3 but this gives a different resolution. We prefer the aspect ratio 3:2 but we can only get a maximum resolution of 11 megapixels.

When starting the camera up, there's a number of icons and options on-screen. In the top left, there's the shooting mode you're in. This can be tapped and the mode changed when in program on the top of the camera (white camera icon). All the available shooting modes are here and it seems that the IXUS 1100 HS has been designed for fun. There's all the new filters such as toy camera, miniature, colour swap and colour extract as well as typical ones such as snow, foliage and fireworks. Modes such as landscape and sport have been removed and Movie Digest added. This mode will take a 4 second video burst whenever you take a picture allowing you to create a small video montage of the day out shooting.

In the bottom left corner of the Canon IXUS 1100 HS's screen is the function button. This is a menu to allow fast access to frequently used options such as ISO, metering, white-balance, focus modes and resolution. The main menu button is in the bottom right when you open the function menu. If you're just on the main screen, the bottom right button will scroll through the display options. Interestingly, the Canon offers features found on the high specification Powershot series such as a histogram and other shooting information. However, this is only in playback and it would be great to see this as a shooting option. Likewise, the option to shoot in RAW would be great.

One area of the function menu that annoys us is the continuous tapping we have to get through just to choose something. The screen seems to be more responsive in the middle because we always had to press the function button a couple of times before it worked. If you want to choose a different setting, you have to tap to the right setting, tap the change that you want to make and then tap again to confirm. We felt that shooting with the IXUS 1100 HS was 60% tapping the screen and 40% picture taking. It's fair to say that once you're used to it, this would get easier. After all, we only get the camera for a limited time so you may find that you slip into a routine with it.

Despite this change in the way the Canon IXUS 1100 HS does things, the menu layout is the same as any other IXUS which is great because it's an easy system to get used to. The menu colours are gun metal grey with orange highlights. It sounds nasty but actually looks quite attractive. The resolution of the screen is 461,000 dots (153,600 pixels) but looks a lot higher because the images are crisp and sharp.

The Canon IXUS 1100 HS has a touch focus/shoot option which is on by default. To switch it off, press the icon at the right of the screen. This becomes a touch focus screen and will lock onto the subject where you touched. Other focus modes can be found in the function menu for landscape focusing, macro and landscape/portrait which is the standard setting. Calibration of the screen isn't all too impressive and needs a touch pen which doesn't come in the box. You have to use your finger, but the touch focus will miss smaller subjects. Macro focusing is impressive and in our tests we got near to point blank range. At this range the image quality suffers immensely with a lot of drop off from near the centre of the frame.

There are three metering modes available in the function menu: Evaluative, centre-weighted and spot. Evaluative uses readings from all over the frame and analyses it to get a mean average. The results are usually highly accurate which is why this type of metering has taken over centre-weighted. Centre-weighted also uses a reading from the whole area but gives more prominence to the centre of the frame and then ignores more and more the further out to the frame edges you go. Spot metering uses only 2-3% of the centre of the frame to meter with. Anything else is ignored. This is useful for silhouetted subjects when you don't want to use flash but this will blow out the highlights as they will over expose. Evaluative is good for everyday picture taking and we found that the camera doesn't over or under expose.

When we pre-empted the timings of the Canon IXUS 1100 HS, we found the shutter lag results come out similar to any other compact at 0.08 seconds. Allowing for human reaction times, the consistent result we got was more on the 0.15 seconds. Continuous shooting mode timings are consistent with the Canon specification sheet of around 3.3 fps (frames per second).

Playback mode offers some nice things to do. It's possible to set the display to show histogram and other shooting settings. Such as resolution, file size, ISO, aperture and shutter speed. In the playback menu, you can erase pictures, edit them, tag them as favourites, lock them, rotate them, create a slideshow with them and categorise them. You can also filter them out to only view pictures determined by specifying parameters such as date, categories, favourites etc.

Hitting the display button scrolls through the options in playback. There are three view types. Normal viewing has the picture full screen with basic information, detailed shows the aforementioned histogram and image information while zoom shows an extract of the picture for checking focus.

Considering the Canon IXUS 1100 HS is a high specification camera and also taking into consideration the retail price, we expected a lot in the box. A metal wrist strap, maybe a soft case or something to set it apart from the other cameras. However, it doesn't even come with a touch pen which is disappointing. There's a charger for the battery and a USB lead for direct connection. The software that comes with the camera is Canon Solution Disc v91.0 and the second disc has the full manual in multiple languages.