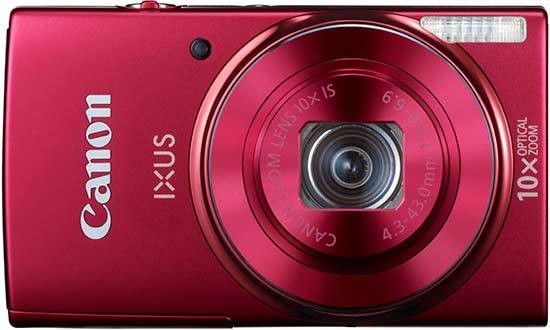 Designed for the point and shooter, the Canon IXUS 155 offers ease of control with powerful features, such as a 20 megapixel sensor, 10x optical zoom, Digic 4 processor and Live view control. Made for the beginner who doesn't want to sacrifice looks, the Canon IXUS 155 costs around £110 and is available in black, blue, silver pink and red.

There's a distinct possibility that Canon knew what they were doing when they made the recent range of IXUS cameras look the same. It takes an extra problem out of the equation when looking to buy a camera because if you're toying with upgrading for the extra features, at least you can't be put off because you don't like the look of it.

While the shape may be the same of the IXUS models below it, the 155 has a couple of tricks up it's sleeve. For example, it houses a 10x optical zoom inside the slimline casing. That's an upgrade from the 8x of the IXUS 150 – the next model down from the 155. That zoom also starts at a wider angle, but still goes out further at the top end. Other upgrades include a higher resolution CCD. At 20 megapixels, you have an additional 4 million photosites on the sensor from the 150.

IXUS have always been known for giving the end user that little bit more and it shows on the 155 even though you have to look a little closer. For example, you get a metal tripod bush which will last a lot longer than the plastic ones found on equivalent priced Powershot cameras. There's also a very small zoom switch placed on top of the camera. These can be large and chunky and using a smaller one is a sign of investment.

The back of the Canon IXUS 155 has a standard layout of four operational buttons surrounding the main navigation pad. To constrict the dimensions slightly, the buttons have been arranged in a staggered formation. Arguably, one of the buttons could be redundant as it accesses a Help menu which could be put in the Main menu. Although, the camera is extremely simple to use and possibly wouldn't be used anyway. Still, if you're a beginner or struggle with technology, then the Help button (signified by a question mark) will explain the functions of the mode you're in without using jargon.

You may notice the absence of the macro and exposure compensation buttons on the back of the camera. These have been moved into the Function menu so that the Eco mode and Auto/Live toggle buttons can be used instead.

Canon have always made their menus easy to use. There are two main menu systems. The most frequently used one will arguably be the Function menu. It's accessed via the centre button on the navigation pad. It brings up various options on the left of the screen which will change dependent on the mode that you're in. For the most expansive, it's best to tap the camera out of Auto mode by pressing up on the navigation pad before going into the menu which will take you into Live mode. Then in the Function menu, select Program from the list of modes under the ISO selector. Other functions you can access in this menu include the aforementioned ISO, white-balance, resolution and continuous shooting options.

For more features of the Canon IXUS 155 that change indepth functions, you need to access the Main menu which is via the Menu button towards the bottom of the camera. There are two tabs that make up the Main menu. The left tab is dedicated to camera functions, such as focusing, image stabilising, Blink detection, i-Contrast and Red-eye correction. The tab on the right is for setting up the base components of the camera. For example, you can change the Volume of different functions, adjust the date & time, format the card, change the video system for use in America or Britain or change the language. There's plenty more and it would be exhaustive to list them all.

The menu systems use a grey background colour code with black fading and white lettering. The highlighter is orange which contrasts nicely with the grey and makes it both appealing and easy to see.

Starting the Canon IXUS 155 from the off position, then focusing and taking a picture can be done in 1.3sec on the IXUS 155. That's slightly faster than the new average of 1.5 – 1.8sec. The camera took eight photographs in a ten second period which is a bit of a plodding speed. We've seen much faster, but then it is continuous and not a burst mode. Essentially, if you want to capture fast moving objects, don't bother, because this isn't a camera built for speed.

You can access the pictures you've already taken by pressing the blue arrow button on the back of the camera. This can be done whether the camera is on or off and where you'd normally have to hold the button down for a few seconds when powered down, the IXUS 155 just needs a tap.

The most recently taken photo will be displayed on the screen with no information and if you desire that, then you can press the Disp button (down on the navigation pad) to add some basic shoot info. Press it again and you get a comprehensive screen of information with the image as a thumbnail and a histogram.

One thing that goes against Canon compacts when compared to some other equivalent cameras from different manufacturers is the use of an external battery charger. Small cameras like this are great for taking away on holidays or travelling – thanks to their wide array of features. The external charger does come with a figure eight lead to plug into the mains. The battery is also included and a small wrist strap. The IXUS 155 doesn't have any internal memory but there's no memory card included in the box either.

In the top section, there's a wrapped up pack containing a Getting Started Guide, a European Warranty information leaflet and some promotional paraphernalia. Noticeably missing is the full User Guide which is normally on a CD with some kind of basic editing and tagging software. These are both available now to download from the Canon website instead. It makes it better on the environment and cuts costs which should be reflected in the price of the Canon IXUS 155.