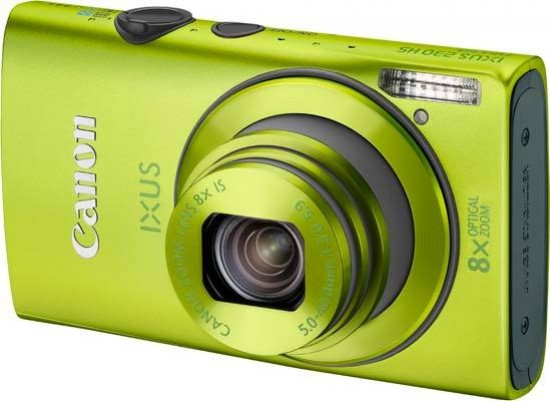 The Canon IXUS 230 HS (also known as the ELPH 310 HS) is a slim, funky coloured digital compact camera boasting an 8x optical zoom, 12.1 megapixel son a back-illuminated sensor using HS technology, a 3 inch LCD screen and DIGIC IV processor. With a sexy design and a tech-packed interior, the IXUS 230 HS looks to impress the younger generation or people who want to stand out from the crowd. Priced at £229 / €269 / $259.99, the Canon IXUS 230 HS / ELPH 310 HS is available in green, silver, purple, blue, pink and black.

On the front of the Canon IXUS 230 HS is a worthy 8x optical zoom which will bring a lot of generally far away stuff nearer to you. For example, at the Zoo, the animals won't be so far away and it will allow you to crop out crowds or buildings making it look like you've been on a safari. The lens bezel sticks out by a couple of millimetres which makes us wonder if they had put in a 7x zoom, would it be flush? It's unlikely that the loss would severely impact on the camera and would make it look a bit more futuristic. Still, it looks nice anyway. On the top of the IXUS 230 HS is the usual line-up with a power button sat next to the shutter release with a zoom lever wrapped around it.

The sexy curves of the front, sides and top of the Canon IXUS 230 HS are cut short to fit the 3 inch LCD screen to the back. Unfortunately for the IXUS 230 HS, it doesn't have a touch-screen. It dominates the left side of the camera with a small area designated to vital buttons such as direct video recording, playback, function menu and the navigation pad. The main menu button has been placed on the right side of the camera which we think is a really good idea. The easy auto/normal auto modes switch is also located on the side towards the top shoulder.

The Canon IXUS 230 HS is priced at under £200 / $250 which is a good start and we don't know of many compacts under that price that have a metal tripod bush. Yes, yes it's a trivial matter but the humble tripod bush appears to be an unofficial benchmark of quality. In a nutshell, if the tripod bush is plastic, the camera is low end, if it's metal, the camera is high end.

Based on this assumption, we can surmise that the IXUS 230 HS is a high-end camera. So why is it under £200 / $250? That's a good price. We think that maybe the camera is aimed lower than the normal target audience of the IXUS to try and draw people in who would normally only look at Powershot because the IXUS range is more expensive. That would explain the lack of a touch-screen because there's certainly space for one. It would eradicate the buttons on the side making the camera a bit smaller too.

The low 12 megapixel resolution is an indication that Canon are not shoving more and more pixels onto the sensor. Canon call this HS technology and they're talking about it a lot. With the combination of the lower resolution, high sensitivity CMOS sensor and DIGIC IV processor Canon say that the image quality is the best yet. To help with noise, the sensor has been improved and the lower resolution should also help to keep noise created by heat from neighbouring pixels to a minimum.

As with any Canon IXUS, the build quality is to a high standard. The casing is metal with only a spatter of plastic here and there and that's usually where there's a door such as covering the HDMI/USB ports or the battery/memory card door. We expected a better quality battery door than what's on the 230 HS - it's quite flimsy and bendy. There's a little bit of play in the lens when it's out but that's to be expected. Although the IXUS range is well known for its quality, the lens doesn't have a marque of distinction the same way that Nikon have ED elements.

With the IXUS 230 HS, Canon have retained the usual twin menu system. The function menu opens up the most used features such as resolution, file size, ISO, white-balance, metering, aspect ratio, drive and video quality. The menu pops up to the left of the screen superimposing itself over the view. The navigation pad is used to work your way around and the middle button confirms any commands (the same button also opens up the function menu).

The main menu is more in-depth covering less used and more permanent modes such as adjusting the focus frame size, i-contrast and flash settings. There's also a second tab for core camera adjustments such as date & time, file numbering and formatting the card. The menus on Canon cameras have always been easy to navigate and the IXUS 230 HS is no different. It's clear, nicely coloured and easy to understand.

There's no denying that the IXUS 230 HS is fast. From pressing the power button to focusing and taking picture took 2.5 seconds. A typical digital compact camera will take 3-4 seconds. In our test, the Canon gave results of 0.08 second shutter lag which is about standard for a digital compact camera. The area we've really taken an interest in is the continuous shooting mode. In a ten second time period we took 20 pictures which averages out to 2 fps (frames per second). The first 3 frames are fast at less than a second but then it starts to slow down as the buffer fills up and ranges between 1 or 2 frames each second.

There are 3 ways to view the pictures you've taken on the Canon IXUS 230 HS. As well as the normal view which simply shows the picture, there's also an option to view all file information and a snazzy zoom view which crops in on a segment of the picture allowing you to check focus. Again there are 2 menus in playback mode. They follow the same routine as when you're in shooting mode with the function menu accessing more used options - or maybe options that Canon would like you to use - while the main menu is exactly the same as in shooting mode anyway.

The function mode has several interesting features such as smart shuffle which displays four similar images which - judging by the results we got - can only be attributed to shooting information. Filtered playback will allow you to narrow down the pictures you've taken using parameters such as date, ratings given or whether it's videos or pictures.

In the box there's a rechargeable lithium ion NB-4L battery, a wrist strap, USB cable and charger unit with mains cable. In the software bundle there are 2 CDs; one with the full manual on and one with a solution disc version 91.0. The disc is compliant with Windows 7 (including SP1) and Mac OSX v10.5. Interestingly there's no memory card included with the Canon IXUS 230 HS despite the camera having no internal memory.