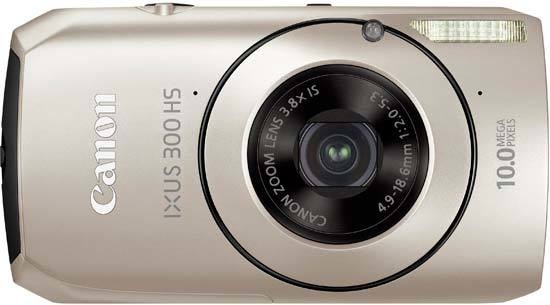 The Canon IXUS 300 HS is a largely successful attempt to marry the style of the IXUS range with a fast lens and excellent image sensor, marred somewhat by an eye-watering price and a lack of refinement in the handling department.

With a 10 megapixel back-illuminated CMOS sensor and fast f/2.0 lens, the IXUS 300 HS was always going to deliver the goods in terms of image quality. Noise doesn't rear its ugly head until ISO 800, with even the fastest 3200 setting proving usable, something that you can't say about too many compact cameras, and chromatic aberrations are also well controlled. Only a slight softness in the corners and some barrel distortion at the 28mm wide-angle setting detract from an otherwise stellar performance.

The inclusion of Aperture and Shutter Priority modes in conjunction with the intuitive control wheel will be warmly welcomed by experienced photographers, while casual users are more than catered for by the wealth of hand-holding technologies on offer. The IXUS 300 HS's lack of external controls does mean that some things are more difficult to access than they really should be, with an over-reliance on the Function and Main menus slowing down the camera's operation, something that will particularly irk serious snappers.

The IXUS 300 HS also doesn't really live up to the HighSpeed part of its name. While 3.7fps at full resolution is pretty fast in comparison with most compacts, there are some Sony models that can shoot at 10fps at full resolution, which rather dwarves the IXUS 300's headline speed of 8.4fps at a paltry 2.5 megapixels. Likewise 240fps movies played back at 30fps are a novel feature, but they're very low resolution and the specification is again bettered by several Casio models.

The main problem for the Canon IXUS 300 HS is that £379 / $350 / €419 price-tag and its positioning within the Canon range. A little more money will buy you the PowerShot S90, which better realises its photographer-friendly features and also offers RAW shooting. For the same price you could buy an entry-level DSLR like the Canon EOS 1000D complete with a kit lens and benefit from even better image quality and handling. Ultimately, while the Canon IXUS 300 HS is an undeniably full-featured compact camera that takes great pictures, it's just too expensive to whole-heartedly recommend.