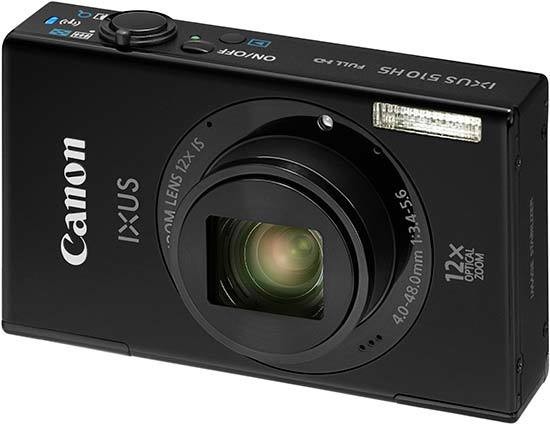 The Canon IXUS brand goes from strength to strength with the release of the snazzy 510 HS (also known as the ELPH 530 HS). It's sharp exterior is complemented by the hardcore interior of a 12x optical zoom with a focal range of 28-336mm, modest 10 megapixel resolution CMOS sensor, stylish metal body, built-in WiFi, large 3.2 inch touch-screen, Full HD video capture with stereo sound and a HDMI port, 2.7 inch LCD screenand a Digic 5 processor. The Canon IXUS 510 HS / ELPH 530 HS is available in in black or white priced at £349 / €399 / $350.

Canon IXUS and Powershot cameras have come a little bit closer to one another these days. Gone are the definite lines of separation with technology so to make sure that the consumer has something that looks completely different to its cousin, Canon make the IXUS models look extremely sexy. The IXUS 510 HS is no exception. The black version we tested has a high gloss face with a large lens bezel that - despite the 12x optical zoom - sits flush with the rest of the body. On a Powershot, it would stick out slightly.

The top of the Canon IXUS 510 HS holds the indented power button, shutter release and a small playback button. The inclusion of the playback button here is a little confusing. After all, it's normally found on the back towards the bottom. That's not to say it's unwelcome or even a hindrance, although admittedly, we did sometimes go into playback instead of turning the camera off.

Turning to the back of the camera and it's immediately obvious why the playback button has been placed where it is. The large 3.2 inch screen takes up the whole amount of space on the back.  This is necessary to retain a degree of smallness about the camera. This is a problem posed to all manufacturers. Consumers want smaller models but with bigger resolution, bigger zoom and bigger screens. It's not physically possible and so they do what they can. Canon appear to have got around a problem quite creatively.

On the bottom of the Canon IXUS 510 HS is a metal tripod bush. We're always happy to see a metal version and our only grumble is that it's too far to the side. This could incur some camera shake when using a tripod. The battery compartment is situated directly next to the tripod bush but it doesn't take the card as well. The MicroSD card is found at the other side of the camera. The clip is only small and a fingernail is necessary to open it.

Switching the Canon IXUS 510 HS on you will see that the camera doesn't use all the frame for picture taking. This is a trick that Sony started a few years ago. The screen used for taking pictures is a lot smaller than would normally be used by the photographer. The reason is because the sides of the screen are reserved for the menu systems of the touch-screen. This is around half an inch on both sides which makes the width of the camera 2.7 inches from diagonal corner to corner. Despite this loss in size of screen compared to cameras that have a 3 inch non-touch sensitive screen, Canon still market it as 3.2 inches to illustrate the physical size and not the actual shooting area.

A point of interest on the IXUS 510 HS is how the lens is compacted into such a small body. To see what Canon have done, all you have to do is look at the lens of the camera when you switch it on. The shutters open, a small lens flips over from the side and the lens telescopes out. When switching off, it all happens in reverse so Canon use an element shift system similar to what Pentax developed years ago to house larger zooms in small bodies.

One of the most interesting developments with the release of the 510 HS is the lower than expected resolution. At 10 megapixels, the sensor is at the same level of compact cameras four or five years ago. This move echoes what they did with the Canon Powershot G10. The sensor is also a CMOS type which means it's more fuel efficient - to the detriment of sharpness. However, it's likely that the new Digic 5 processor will be able to overcome that hurdle. Something that we'll see later in the review.

The Canon IXUS 510 HS is exceptionally well built. The metal casing not only looks good but feels great. There's a solidness to the casing that only IXUS cameras have. The previously mentioned metal tripod bush will last a lot longer than a plastic variety and the compartment lids are strong. Except for the HDMI/USB port cover. This crucial port is covered by some rubber for some reason. It's logical that it makes it a little more weatherproof but a snapping lid and a little rubber on the inside would be just as effective and look a lot nicer.

The main menu of the IXUS 510 HS digital compact camera is relatively straightforward. It has large icons that anyone can understand. The large boxes have easily recognisable icons and the size of them makes them a breeze to select even with the biggest fingers. There's nothing new on the menu systems, the usual pre-programmed modes are there along with some digital effects such as miniature and soft focus. All the usual buttons are available on the back screen of the camera. The direct video record button is signified by a large red spot. The function menu is still present for quick access to most used features such as white-balance, ISO and resolution.

The speed of the IXUS 510 is impressive thanks to the HS (Hi-Speed) facility. In the continuous burst mode, we got 15 shots in a ten second period which averages to 1.5 frames per second (fps). However, this wasn't a steady run of 1.5 fps. The camera will rattle off 4 frames in the first second before slowing to allow the buffer to cope. Focusing is ultra fast. Start up time is around the same as any other digital compact camera but shutter lag is great at 0.04sec. The average digital camera has a lag of around 0.08sec.

The playback screen is an array of buttons and options just on the main viewing screen. The  image is brought up in the centre of the frame with several options in the corners while the sides are reserved for scrolling left or right. In the top left corner, the Wi-Fi options are available. The options are to a camera. Phone, computer or to the internet. The function menu is available as well as display options. The function menu brings up options such as delete, protect, rate and some search options.

Playback can be operated by pressing the review button on top of the Canon IXUS 510 HS whether it's switched on or not. In fact, it's best for it to be off so that the lens isn't sticking out although it does retract after a minute or so. Pressing the display button will scroll through a couple of options. The first is shoot information. It gives photo details such as film speed, aperture and shutter speed. There's also a histogram for the more adventurous out there to check exposure. The second alternative displays a focus square in the bottom right corner of the screen. It shows if the picture is sharp which is useful if you have the opportunity to shoot again.