Canon PowerShot A2100 IS Review 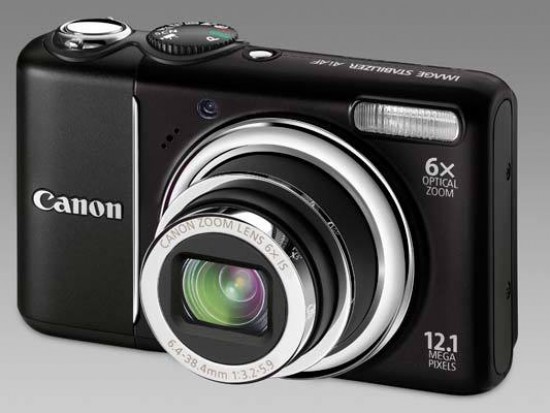 The Canon PowerShot A2100 IS digital camera is the new top-of-the-range model in the popular PowerShot range, which has traditionally offered a compelling combination of features and affordable price. The A2100 IS replaces the PowerShot A2000 IS model, offering a new 12.1 megapixel sensor, 6x optical zoom lens with a focal length of 36-216mm and optical image stabilizer to help prevent blurred photos. The Canon A2100 also features a large 3-inch LCD screen with wide viewing angle, new DIGIC 4 image processing engine, 18 shooting modes including the new Smart Auto and improved Easy modes with Scene Detection Technology for point-and-shoot operation, plus Face Detection, Face Select & Track, i-Contrast, Motion Detection and Auto Red-Eye Correction technologies. Available in black for $249.99 / £259.00 / €309.00, we find out if the Canon PowerShot A2100 IS deserves its place at the top of the Canon A-series range.

From the outside the Canon Powershot A2100 IS is virtually identical to the A2000 model that it replaces. This is still a well-made, fairly compact digital camera, with a serious matt-black plastic body and excellent overall finish. It's just about small enough to fit into the palm of your hand, which is quite remarkable considering the 6x optical zoom lens that's equivalent to a 36-216mm focal length. The A2100 IS has also been considerably slimmed down, measuring 3cms thick when turned off, making it suited to either a trouser pocket or small camera bag. It has a reassuring weight of 185g without the battery or memory card fitted.

As with most Canon cameras that we've reviewed before, the Powershot A2100 IS is one of the better models around in terms of build quality. Every aspect has a quality feel with nothing feeling flimsy or ill-thought out. The main criticism that we leveled at previous PowerShots, namely that the tripod mount was plastic instead of metal and positioned in the extreme left corner of the bottom of the camera, has been rectified by the A2100's central, metal mount, so kudos to Canon for listening to user feedback. The battery compartment still houses the memory card slot though, which means that the AA batteries sometimes fall out when changing the memory card as they don't have a catch to keep them in place. Still, this is a fairly minor criticism of a quality product.

A less welcome change is the lack of any kind of hand-grip. Older models were comfortable to hold thanks to the chunky, rubberised hand-grip, but this has been completely removed on the A2100 (and the previous A2000), inexplicably replaced by a smooth, flat finish, embossed with the Canon logo. This makes it more difficult to hold the camera than it really should be - only the inclusion of a small vertical, raised moulding on the rear saves the day. The various buttons are well-made and easy to operate, and the action of the mode dial has been stiffened up so that it's less likely to be inadvertently turned to the wrong mode when stored in a pocket/bag. There are no real innovative features here, but everything that the Canon Powershot A2100 IS does, it does extremely well. Overall the Canon Powershot A2100 IS is well constructed and designed with no obvious signs of corners being cut.

The Canon Powershot A2100 IS has relatively few external controls, just 11 in total, which reflects the fact that this is quite a simple camera in functionality terms, with only limited photographic control on offer. Compared to the older A720 IS model, which offered a full range of creative shooting modes including shutter-priority, aperture-priority and manual, this represents a big change for the A2100, continuing the more simplistic approach of the A2000. It won't be a big deal for the less-experienced snapper, who will get more use out of the point-and-shoot Easy and new Smart Auto modes, but for many keen photographers looking for a second, pocket camera, this news will come as a bitter pill to swallow. If you really want a fully-capable PowerShot, then the G10 is a much better fit.

Located on top of the A2100 IS are the Power button, Mode Dial, Zoom Lever and Shutter button, and on the bottom are the tripod mount and battery compartment, which also houses the SD memory card slot. On the rear of the A2100 is the large 3 inch LCD screen, with a number of controls to the right. You can directly access the various focus and flash options by clicking left and right on the navigation pad, whilst up and down are respectively used to set the exposure compensation and timer options. There is sadly no longer a dedicated button for ISO speed, which is a commonly used feature, although you can work around this by optionally setting the Print Transfer button to one of 7 available options (which include ISO speed).

The Function/Set button in the middle of the navigation pad opens a sub-menu, which allows you to set ISO speed, white balance, colours, metering, continuous shooting and image size/quality settings. This system is a good compromise given the size of the camera's LCD screen and therefore the limited space for external controls. All 11 external controls are clearly labeled using industry-standard symbols and terminology. Overall the camera body feels very well-designed and not at all cluttered, despite the presence of the large 3 inch LCD, which has a wide viewing angle from left to right, and is visible in all but the brightest of sunlit conditions. There is no optical viewfinder on this model.

If you have never used a digital camera before, or you're upgrading from a more basic model, reading the comprehensive and fairly easy-to-follow manual before you start is a good idea. Unfortunately Canon have chosen to cut costs and only supply the full manual as a PDF on a CD, rather than in printed format (there's just a short printed guide to the camera's basic features). Not much use if you're taking pictures and need to find out what a particular option does.

The menu system on the Canon Powershot A2100 IS is extremely straight-forward to use and is accessed by a dedicated button underneath the navigation pad. Quite a lot of the camera's main settings, such as white balance, exposure compensation and ISO speed, are accessed elsewhere, so the main menu system isn't actually that complicated. A row of 2 icons along the top of the LCD screen represents the Camera and Setup sub-menus, with most of the options being the kind that you set once and then forget about. Due to the very large and bright LCD screen, the various options are easy to access and use, especially as only 6 are shown onscreen at one time.

The Canon Powershot A2100 IS offers Program and a comprehensive range of different scene modes aimed at the user who just wants to point and shoot, making this camera particularly well-suited to the beginner. The A2100 IS also offers Smart Auto Mode for the first time on a Canon compact. Similar to Panasonic's Intelligent Auto, Smart Auto Mode automatically determines the subject's brightness, contrast, distance and overall hue, then selects the best scene setting from 18 possible modes, which is more than most competitors. The A2100 uncannily selected the right kind of scene mode for almost every environment that I tried it in. There's also the improved Easy Mode, where the camera automatically sets every shooting setting, preventing the inexperienced user from changing anything at all, apart from turning the flash on and off. In addition Easy Mode works in the same way as Smart Auto Mode - it really does turn the A2100 into a true point and shoot camera, perfect for use by children for example.

The Canon Powershot A2100 IS has an anti-shake system, dubbed IS Mode - turn it on in the menu system and the A2100 IS automatically compensates for camera shake, which is a slight blurring of the image that typically occurs at slow shutter speeds. There are three different modes. Continuous is on all the time including image composition, Shooting is only on when you press the shutter button, and Panning as the name suggests is best when using the camera to track a moving subject. In practice I found that it does make a noticeable difference, as shown in the examples on the Image Quality page. You don't notice that the camera is actually doing anything different when anti-shake is turned on, just that you can use slower shutter speeds than normal and still take sharp photos. Leaving the anti-shake system on all the time does seem to affect the battery-life, however, with the camera only managing just over 150 shots before the supplied LR6-AA Alkaline batteries ran out of power. As part of a belt and braces approach, the anti-shake system is also newly backed up by motion detection technology that assesses camera or subject movement. The latter is effectively what rivals would refer to as digital anti-shake, as, activated in high ISO auto mode, it boosts ISO to a level (between ISO 80-800) it considers will compensate without hopefully introducing too much noise. Still, you do get both in the same camera.

The start-up time from turning the Canon Powershot A2100 IS on to being ready to take a photo is quite quick at around 1.5 seconds, and it takes about 3 seconds to zoom from the widest focal length to the longest. Focusing is very quick in good light and the camera happily achieves focus indoors or in low-light situations, helped by a powerful focus-assist lamp. The visibility and refresh rate of the 3 inch LCD screen are perfectly acceptable, with a standard resolution of 230,000 pixels. It takes about 0.5 second to store an image, allowing you to keep shooting as they are being recorded onto the memory card - there is a very quick LCD blackout between each image. In Continuous mode the camera takes 1.1 frames per second at the highest image quality, which is slow for this class of camera (and slower than the 1.3 fps offered by the A2000), although the shooting rate is maintained until your memory card is full. The flash recycle time has thankfully been improved from the previous A2000, now taking a more acceptable 3 seconds to recharge between shots.

Once you have captured a photo, the Canon Powershot A2100 IS has a pretty good range of options when it comes to playing, reviewing and managing your images. You can instantly scroll through the images that you have taken, view up to 9 thumbnails, zoom in and out up to 10x magnification, view slideshows, delete, protect, resize and rotate an image. You can also add a sound clip to an image, set the print order and the transfer order. The Red-eye Correction options fixes red eye after you have taken a photo (useful if you forgot to activate it before) and i-Contrast improves the shadow/brightness areas, with Auto and Low, Medium and High settings (if you select i-Contrast before taking a photo, only Auto and Off settings are available). The Display button toggles detailed settings information about each picture on and off, such as the ISO rating and white balance, and there is a small histogram available during playback which is helpful in evaluating the exposure. A third press of the Display button shows the image alongside a small, magnified section, useful for quickly checking the sharpness.

In summary the Canon Powershot A2100 IS is a stylish, fairly compact and well-built digital camera that is simple to use and even more well-suited to the beginner than the previous A2000 model.