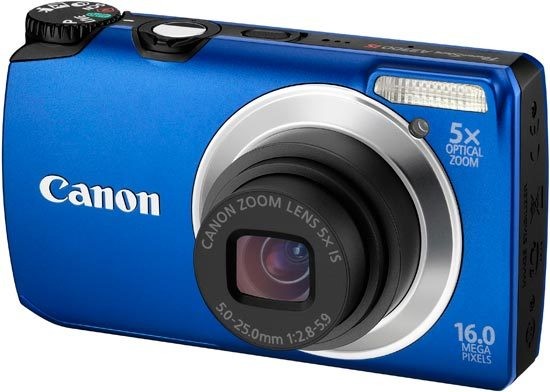 The Canon PowerShot A3300 IS replaces the A3100 as the new top-of-the-range model in the affordable PowerShot range of digital cameras. Featuring a 16 megapixel image sensor, 5x optical zoom lens complete with image stabilizer and 3 inch LCD screen, the A3300 IS sports a slim and lightweight body in four different colours. Other highlights include 720p HD movies, 32 shooting modes including Smart Auto and Easy modes with Scene Detection Technology for point-and-shoot operation, 6 creative filters, Face Detection, Auto Red-Eye Correction and the DIGIC 4 image processing engine. Available in red, pink, silver and blue for £149 / $179 we find out if the Canon PowerShot A3300 IS deserves its place at the top of the Canon A-series range.

The Canon Powershot A3300 IS is a small, easy to use digital compact camera with a high resolution 16 megapixel sensor, modest 5x optical zoom with a wide-angle 28mm focal length, 3 inch LCD screen and optical image stabiliser. Priced at around £150, the camera appears ideal for the point and shooter who needs a palm sized camera for nights and days out as well as holidays.

Looking at the front of the Canon Powershot A3300 IS, the 5x optical zoom proudly juts out of the body with the slim flash sat just above, which could cause trouble with red eye due to its alignment. The focal range is 5x optical which covers 28-140mm in 35mm terms.

There are three cameras in the range, the A3100, A3200 and the A3300 which sits at the top of the pile in terms of features. Build quality appears the same as the lower models and there are the same features on the camera. On top of the A3300 IS, it bears the same best shot dial which allows speedy access to certain functions such as video, scene modes, landscape and easy mode as well as standard auto and a program mode which still does everything for you, but it opens up more options in the menu system.

Selecting the icon that has two intersecting circles, you can then go into the function menu and choose from six special effects that have been fitted to the camera. They're all there for a bit of fun and include posterize, super vivid, toy camera and miniature as well as a black & white mode. However, one of the best features on the entire camera is the fish-eye effect mode. All it does is bowl out the middle of the frame distorting anything in the centre but it's great to take some close up self portraits. Another interesting feature is the Live View Control mode which brings up three sliders for adjusting the picture such as contrast, saturation and colour temperature.

There are times when having a loud beep and whirr click to tell you a picture has been taken is not desirable, such as taking pictures of animals or if you're in a library or museum. Because of this obvious need, Canon have fitted a discreet mode to the command dial. Nothing else changes in the A3300, just that it's a lot quieter. In fact when taking a picture in discreet mode, the only sound is the slight clicking of the shutter opening and closing again.

The 3 inch LCD screen sits to the left on the back of the A3300 so all the buttons are pushed over to the right. Obviously that's the name of the game with all modern digital cameras of this specification, but with the Canon, there's little space for anything else. There's a patch to rest your thumb on the three raised spots just above the playback button. As negative as this all sounds, the camera isn't unpleasant to hold or operate.

To the right of the screen are all the buttons to gain access to the main controls of the camera. The menu button is for the main menu which is more extensive than the function menu. It allows you to change core features on the A3300 such as focusing points, zoom functionality and flash settings. There are two tabs, the camera tab is for shooting modes and the spanner and hammer tab are for changing the make up of the camera such as date & time, formatting the card and the language.

For everyday shooting, though, the A3300 IS has a light menu system called the function menu. This is accessed by pressing the function/set button in the centre of the navigation pad. It allows you to change typical settings of the camera such as ISO, metering, drive modes (continuous shooting) and file sizes. When you've made your selections, pressing the function button again sets these changes.

Around the function button are four more options. Pressing up will access the exposure compensation which forces the aperture open or closed by up to 2 stops if your subject is too bright or dark. Pressing right accesses the flash modes while pressing down activates the self timer modes. There are more than one self timer options, you can choose from 10 seconds, 2 seconds or input a custom time span for the camera to count down from. It would be nice to see the face activation self timer that is on the G series at the moment.

The Canon Powershot A3300 IS takes any type of MMC or SD card that are available today. The difference between Multi Media Cards (MMC) and Secure Digital (SD) is a small locking button on SD and SD have much higher capacities available to them. There are two extra types of SD card on top of the standard SD type. SDHC is the High Capacity version that ranges from 4Gb to 32Gb while the newly introduced SDXC card type has a capacity of 64Gb to a theoretical maximum capacity of 2Tb (2048Gb).

If you're looking at the A3300, you may not be fully conversant with the jargon that some of the manufacturers use to describe their features such as a DIGIC processor and iSAPS technology. The DIGIC processor is Canon's dedicated processor for digital imaging. The A3300 IS features the fourth version which was introduced in 2008 and boasts faster image processing, improved noise reduction and the capability of recording Full HD video. However, the A3300 IS doesn't record at that level, so it's more than enough. DIGIC stands for Digital Imaging Core and is the heart of the camera. When you take a picture with the camera, the information runs through the DIGIC processor before storing onto the memory card. During this process, the image is sharpened, compressed and appropriate colours are boosted to make it look more attractive.

Every camera has its own scene recognition system these days; Panasonic (pioneers of the technology) call it Intelligent Auto for example, and they all do the same job. The system analyses the picture before you take it and selects the correct scene to get the best shot. So if you have a person in the frame, the camera automatically selects portrait mode, enables face detection and gets the flash ready in case it needs to use it. This information is taken from thousands of photographic scenarios programmed into its data banks so it's pretty clever stuff.