Canon PowerShot A4000 IS Review 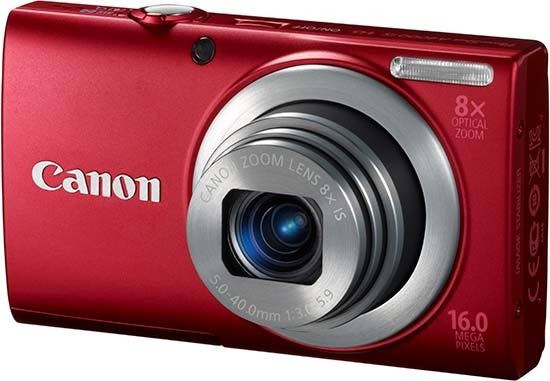 The Canon PowerShot A4000 IS replaces the A3300 as the new top-of-the-range model in the affordable PowerShot range of digital cameras. Featuring a 16 megapixel image sensor, new 8x optical zoom lens complete with image stabilizer and a 3 inch LCD screen, the A4000 IS sports a slim and lightweight metal body in four different colours. Other highlights include 720p HD movies, 32 shooting modes including Smart Auto and Easy modes with Scene Detection Technology for point-and-shoot operation, 6 creative filters, Face Detection, Auto Red-Eye Correction and the DIGIC 4 image processing engine. Available in red, pink, silver, black and blue for £149 / $179 we find out if the Canon PowerShot A4000 IS deserves its place at the top of the Canon A-series range.

It was once the case that Canon had two distinctly different lines in their digital compact camera range. The Digital IXUS: sexy and neat with sharp edges and aimed at the fashion conscious over the feature driven crowd. The PowerShot: Bulky, oozing with tech, features and modes, based on practical use over looks. However, this new line of PowerShot cameras is a far cry from that and only serves to further merge the two ranges together.

Take the new Canon PowerShot A4000 IS for example. It has a slightly convex front face with an 8x optical zoom lens that protrudes from it by around 2-3mm. A small flash and autofocus assist lamp accompanies the 8x optical zoom lens on the front. On the top, the power button is sunken into the body to prevent accidental depressing when you're trying to take a picture. It's colour coded with the rest of the body - which is nice - and we'd liked to have seen this run through to the shutter release button. It would be easier to see in the dark but it looks lower quality.

On the back, the 3 inch LCD screen takes up around 80% of the available space. The buttons are crammed into the remaining space but are surprisingly large. A dedicated video button sits at the top ready to be used by a quick press with the thumb. Below this is the Help button. This useful little feature will give you an explanation of the mode you're in as well as some examples of when it will be useful.

The Canon PowerShot A4000 IS's navigation pad is a little smaller than we'd like but it fits with the space available. The buttons double up when not in a menu system and access macro, flash options, display options and mode switch. The latter is a simple twin mode option. Pressing the button will switch between auto and the mode that's selected in the Function menu.

To select the mode in the Function menu, make sure you're not in Auto mode and press the button in the centre of the navigation pad. The first option is for the modes available is for the scenes. Choosing Program opens up the most options in the rest of the Function menu such as ISO, white-balance, resolution and drive modes.

Live View Control is a new feature that allows the photographer to see the changes made to the picture in real-time. Selecting Live View Control mode in the Function menu will bring up a small button in the bottom left corner.

There's a feature called i-Contrast on the Canon PowerShot A4000 IS. It's a similar concept to HDR photography. It works by expanding the dynamic range of the picture. It brings out more detail in shadowy areas and caps burn out in the highlights. The best time to try this feature is when there's complex light or strong sunlight.

This new breed of PowerShot digital compact cameras has shown a push in build quality from Canon. As well as the metal casing, there's a metal tripod bush which is generally reserved for higher specification cameras such as bridge, prosumer, CSC and DSLR. Compacts usually have a plastic bush because they don't experience as much use. In fact, the tripod bush is a weird benchmark to signify a leap in build quality. The camera fits nicely into the hand being palm sized but still crams an 8x zoom into the body. The buttons are responsive and the requests are actioned with a smoothness synonymous with Canon. There's no rush in the actions.

Canon menu systems have always been easy to use and the A4000 IS is no different. The camera has two menu systems; the Function menu and the Main menu. The Function menu is a quick access list of most used features such as picture modes, resolution, ISO, white-balance, drive and self-timer options. The Main menu is more in-depth and accesses more core functions such as AF framing, red-eye correction, i-Contrast and the Set-up menu which can change the whole actions of the camera such as LCD brightness and Date & time. It can also format the card so be careful venturing in there if you're unsure. The layout is a simple black background with white writing and an orange highlight. Photographers who are hard of sight will find this approach more agreeable.

The Canon PowerShot A4000 IS has only one drive mode in the Function menu and it's not really that fast. The camera obviously doesn't have a large buffer for holding picture information because the continuous mode simply plods along taking pictures when it's ready. We managed 7 frames in a ten second period which equates to an average of 0.7 frames per second (fps). Not even 1 fps which is pretty slow. Start up time shows more promise with a power up to first shot time of 2.3 seconds. Shutter lag tests came out a little slower than what we're used to seeing which is unusual considering Canon cameras we've tested in the past have had faster lag times. Our own reflexes need to be taken into account though.

Playback can be activated in two ways. More precisely, it's using one button but can be done either when the camera is powered on or not. There are three displays to try by pressing the Disp. Button on the navigation pad. They are: full image, no information, full image, basic information such as image resolution, number, date & time. The final option is for more seasoned photographers and holds more information such as Shooting mode, ISO, Exposure Compensation setting, resolution, file size, shutter speed and aperture. In the playback menu, there's a search feature, you can create a slideshow, set up a photobook, edit functions such as i-Contrast, red-eye and resize. There are also two more tabs for setting printing options and the set-up menu again.

In the box there's a sealed package that contains the CD software, basic starter pack to set the camera up and understand it's primary functions along with some promotional and health and safety paperwork. With this pack, the Canon PowerShot A4000 IS comes with a lithium ion battery, charger, USB lead and wrist strap. This is the usual stuff to find in a digital camera box these days. Memory cards used to be included and canon was one of the last bastions of this tradition but even they gave in to the fact that with the internal memory, they simply don't have to.