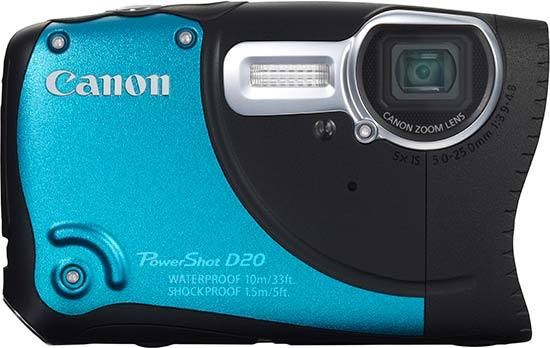 After 3 years, Canon have updated their waterproof camera, the D10. Now, the PowerShot D20 comes with a larger 5x optical zoom, the same 12 megapixel resolution and a slimmer, squarer body. The sensor has new HS technology for good low light performance and there's also a 3 inch LCD screen. The protection that the camera gives has also been expanded and in this test, we'll be seeing if it can step up to the mark. The Canon Powershot D20 costs £299.99 / $349.99 and is available in blue, yellow and silver.

The Canon Powershot D20 is by no means a carbon copy. It updates the D10 model that was released way back in good ol' 2009. There are a few notable improvements, but mainly we weren't happy with the noise performance of the D10. The D20 now has HS sensor technology which improves on noise and increases low light performance. Therefore the D20 should show considerable improvement in that department.

Just by looking at the Canon PowerShot D20, you can see some considerable changes in the design department. Out goes the rounded, pebble-like shape for a more boxy, squared off number. The lens sits in the top corner - similar to the Olympus Tough models - with the flash directly to the side. The left side sweeps in towards the bottom like a wave but creating sharper corners and cleaner lines. The D10 had only two buttons on the top plate whereas the D20 has the playback button added there. It can be easily distinguished between the three so there shouldn't be too much of a problem even when underwater. On the back, the buttons are large and textured plastic for grip in cold or wet conditions. However the video button remains shiny chrome metal.

A number of new features have been added to make the Canon PowerShot D20 much more appealing to the travelling photographer. Video has been upgraded to Full 1080 HD and a HDMI port has been added to view video and stills. The zoom has an extra stretch as it now goes up to 5x optical. It starts at 28mm which gives it a top end of 140mm. Also, GPS has been added to the camera so you can correlate your pictures with your location when you get home. These can be posted on Google Maps for your friends to see.

The body is thicker to accommodate the protective shell and it also adds a nice weight to the unit. The obligatory screws are visible to give it a nautical theme as though it's been riveted. For some reason, customers expect to see the camera bolted together like a ship if it can go into water. If not, they want smooth, seamless lines.

The resistance has been increased in the shockproofing allowing for an extra foot in height but freeze and waterproofing have remained the same at -10 and 10m respectively. Rubber seals line the doors to the battery/memory card compartment as well as the door that hides the HDMI and USB ports. The locks on these doors aren't hard to open. They have a double locking system on them so if you were to catch the lock accidentally, it's unlikely that it'll fling open allowing water to gush inside. We would have liked to see a metal tripod bush on the camera to ensure longevity for photographers that shoot long exposures a lot. Still, this is a more “on the go” camera so it's likely tripod use will be kept to a minimum.

Canon introduced a new strap connector on the PowerShot D20 which is a lot stronger than the traditional D-ring type found on other digital compact cameras. It uses a latch and lock system but then gets let down by using a traditional attachment to the locking nut. The D10 had a long metal cord supplied which was great for snorkelling/light scuba use.

Canon have utilised the same menu system that's been found on their digital cameras for a few years now. Anyone with a current Canon compact will find it familiar. Newcomers to the brand will see that it's very well laid out, with bright and bold colours. There are two main menu systems. The menu button at the bottom of the camera on the back accesses more indepth options such as AF systems, Flash settings, exposure details and how the camera shows you a picture once it's been taken. There's also a second tab for the set up menu which allows you to change features such as the brightness of the screen, how the camera records files, the date/time and GPS settings.

For more instant features that are commonly used when shooting, pressing the Function button (denoted with the term FUNC.) in the centre of the navigation pad opens up access for ISO, White-Balance, Resolution, Aspect Ratio, Self-Timer, GPS and metering among others. Icons have been selected for their universal appeal but a small explanation of the mode will flash on screen for a few moments when you first rest on it. Pressing up on the navigation pad opens up the Mode Menu. This determines what mode the camera is in such as Auto, Program, Underwater/Underwater macro, Snow, Scenes and Video (allows for more control).

The Canon PowerShot D20's start-up time is impressive. From the switched off position, we managed to get the camera on, focused and taking a photograph in 1.7sec. Many cameras sit around the 2.5sec mark so this is fast. The continuous mode has no burst setting. It plods along from the start but will fire out 2fps (frames per second) which is very respectable.

An interesting point about the D20 is that it holds no internal memory. This is usually reserved for the Canon compact elite; such as the IXUS range or G series. Maybe Canon thought it was one more thing to worry about when waterproofing? Whatever the reason, if you don't have a card, you're not taking pictures. The camera does take up to and including SDXC which allows for huge capacities. Perfect for taking on a long holiday; which is exactly what the camera is designed for.

As with any digital compact camera, the playback mode can be accessed by pressing the button (on top of the camera) whether the Canon PowerShot D20 is on or off. Both menu buttons work. The Function button again accesses most used features such as Delete, Star Rating, Lock Image, Image Search, Slide Show and Print List. The Main Menu copies several of those but expands the Print Options to allow bulk lists of images to be selected for printing. The Set-up menu is also there.

Some basic editing can also be done in playback. For example, you can add colours/accents to the picture resize it, trim it, adjust Red-Eye or add iContrast (Canon's dynamic range boost).

The usual tightly packed Canon software & documentation pack is included in the box. It features a Getting Started manual in 17 additional languages to your own which is why it's so big. It's commonplace to put the full manual on a CD these days to save money, paper and - therefore - size of packaging. In addition to this, a second CD features Image Browser EX 1.0, Camera Window 8.7 and Photostitch 3.1. Alongside the software, there's also a USB cable, separate charger (unfortunate extra bulk if travelling), battery and strap.