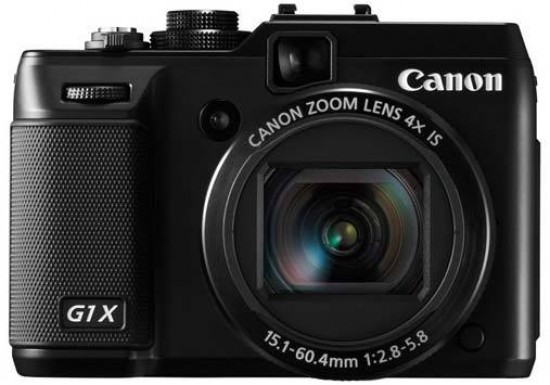 Measuring 116.7 x 80.5 x 64.7 mm and weighing 534g, the G1 X is quite a lot bigger and heavier than the G12 model, but it still retains a very similar control layout that will feel instantly familiar to recent G-series owners. Featuring a metal body with a solid feel, tank-like construction, the G1 X feels very well made indeed, with a layout that while busy avoids looking too cluttered and external controls that offer just the right amount of stiffness and resistance and are large enough to be easily and quickly accessed in the heat of the action. The G1 X won't fit into a trouser or shirt pocket, being much more at home in a deep coat pocket or a small camera bag.

The main reason for the G1 X's increase in bulk is that it's Canon’s first compact camera to feature a large, 4:3 aspect, 14.3 megapixel CMOS sensor. Measuring 18.7mm x 14mm, it's almost the same height as the APS-C sensor used in manuy DSLR cameras, with the G1 X actually featuring the same pixel size and structure as the EOS 600D camera. This should add up to better image quality especially in low-light, greater depth-of-field, and greater dynamic range, all the things that your typical compact cameras struggles to deliver.

Photographers who love getting hands-on with their cameras will relish as we did being able to turn the G1 X's top plate rangefinder-like dials to select the exposure compensation and capture options from the shooting mode dial. The G12's ISO dial has been sacrificed, though, to make room for the new pop-up flash, replaced instead by a less satisfactory button on the rear, which makes choosing the ISO speed a 3-stage process. Another grumble is that, annoyingly for a creatively rich camera, the full user guide is provided on CD only. In what comes across as a cursory gesture, only a very slim printed quick start guide is included in the box.

The unassuming-looking front plate is dominated by the 4x zoom lens with filter thread for the attachment of supplementary extras, the optical viewfinder directly above and a bulb for the built-in self-timer/AF assist lamp flanking them on the left. An optional lens filter adapter which extends with the lens when using the zoom to offer full coverage throughout the zoom range allows the attachment of 58mm filters. The G1 X has a very useful front control dial, as featured on EOS DSLR cameras, which makes changing the aperture and consequently the full Manual shooting mode very easy. There's a gently sloped padded ridge by way of a handgrip to the left hand side of the G1 X - if viewed lens on - and a similarly textured small pad at the back for the thumb to grip.

From left to right the G1 X's top-plate houses the new pop-up flash and a switch for manually releasing it, along with a hotshoe for an accessory flash (in addition to the built in bulb), a penny sized wheel for adjusting exposure (+/- 3EV), plus a smaller wheel for setting the shooting mode that's mounted on top of the exposure compensation wheel, resembling the upper tier of a wedding cake.

The shooting mode dial features settings for Auto capture, Program, Shutter Priority, Aperture Priority and Manual, along with two user customisable settings, a smattering of scene modes (15 in all), a Creative Effects mode and finally a video mode. The upgrade to 1080p HD video quality at 1920x1080 pixels at 24fps is a big improvement on the G12's 720p quality. The G1 X also boasts stereo sound courtesy of tiny microphones positioned either side of the flash hotshoe and you can use the creative filters during recording to spice up your footage. The 4x optical zoom can now be used when filming, another improvement on the G12 which only offered a digital zoom during movie recording.

The new Creative Filters shooting mode contains 10 different options to help spice up your images. The High Dynamic Range mode is probably the most useful, automatically taking three exposures of the same scene at different settings, then combining them in-camera to create a single image with greater dynamic range. Note that you need to mount the G1 X on a tripod or stable surface to avoid camera-shake.

Continuing our hands-on tour of the Canon PowerShot G1 X's top plate, just to right of the exposure compensation and shooting mode dials, we find a springy raised nipple-style shutter release button surrounded by a rocker switch for operating the optically stabilised 4x zoom (28-112mm equivalent on a 35mm camera), and behind this again the on/off button. The fact that the lens is image stabilised, says Canon, provides a four-stop advantage when shooting handheld, while the Intelligent IS system analyses the focal length, focal distance and type of camera movement and applies the most appropriate mode from seven possible settings, and the Hybrid IS system makes shooting macros easier than before by counteracting both shift and angular movements.

The G1 X is quick to power up in a second or so, the rear LCD blinking into life with HS System visual and the 4x optical zoom lens simultaneously extending from storage within the body to its maximum wide-angle setting. Here, as with the G12, it's the equivalent of 28mm, making it very useful for those landscapes group portraits or getting the required shot in confined spaces. The G1 X has a respectably bright aperture of f/2.8 at the wide-angle end the zoom range, although f/5.8 at full telephoto is less impressive, it seems a necessary consequence of the physically bigger image sensor. As a further aid to landscape fans, a 3-stop neutral density filter option is provided among the function menu options, to be turned on or off as required, and the horizontal Electronic Level and RGB histogram can be enabled to help with composition and exposure.

The G1 X has a moderately impressive continuous shooting mode, which in conjunction with Tracking AF makes it well-suited to both slow and fast moving subjects. In the High-speed Burst HQ mode the G1 X takes 6 full-resolution JPEG shots at 4.5fps to help freeze fast-moving action, or you can shoot continuously at 1.9fps up to the full capacity of the memory card in JPEG format. Note that this drops to just 0.7fps if Continuous AF mode or Live View are selected.

We appreciated the flexibility presented by the adjustable screen in terms of trying out unusual and formerly awkward framing, which as well as being flipped out at right angles and rotated about its axis can be folded screen-in to the body for added protection. This monitor tilts forward through 180° and backwards through 90° in order to achieve those otherwise awkward angle shots when users can't quite get their eyes level with its optical viewfinder, such as when shooting low to the ground or over the heads of a crowd. The LCD has also been upgraded to a larger 3 inch monitor with a higher resolution of 920K dots.

Fittingly enough this screen takes up the largest part of the back plate's real estate, above which is a porthole for the alternative of an optical viewfinder, complete with dioptre adjuster for glasses wearers. Although larger than you'll find on most compacts these days, it's no match at all for that typically found on even an entry level DSLR or a compact system camera, which, with a UK asking price of £699 at the time of writing, the G1 X is directly competing with. It's too small, displays no shooting information at all, and displays part of the lens barrel at the wider-angle lens focal lengths. Still, in being targeted at enthusiasts first and foremost, the best way to view this camera is as a more portable back-up to existing DSLR ownership.

Top left of the LCD is a direct print button that will be familiar to users of the Canon PowerShot range. This more helpfully doubles up in shooting mode as a user assignable shortcut key to the likes of red-eye reduction or auto exposure lock. Falling naturally under the thumb at the Canon PowerShot G1 X's rear is a playback button, to the right of which is the new one-touch movie record button, which as its name suggests instantly begins recording a movie at the current quality and creative settings.

Beneath this again is a pair of dual-purpose buttons. In playback these are the delete button, plus, alongside it, a means of jumping through batches of captured images, variously 10 or 100 at a time. In auto capture mode the left hand button acts as a way of activating face detection, while in program mode it allows the focus point to be shifted from its default central position to one of the user's choosing. The Tracking AF mode allows you to select objects from the centre of the frame and track them if they move or if the frame is recomposed. The G1 X focuses quickly enough for a compact camera in either good light or bad, with a slight delay of around 0.25 second, but it's certainly not as fast as a DSLR or the best of the compact system cameras. The second button sets Spot AE, either to the current AF point or the center of the frame.

Underneath this pair of controls is the four-way selection or control pad, with, at points north, east, south and west a means of selecting the ISO speed (the handy Auto ISO feature allows the maximum ISO speed to be set, therefore specifying what ISO range the G1 X will use if you leave it up to its own devices), choosing from the on-board flash settings, selecting the display mode and activating normal, manual or macro focus mode, the latter disappointingly only letting you get as close as 20cms from your subject. At its centre is the Function/Set button that is again consistent with the Canon G-series. Press this button at its centre when in any of the capture modes, and an L-shaped toolbar that will be familiar to Canon users appears on the screen, offering pull out toolbars with further options from the range when you come to rest on a particular setting.

At the bottom right hand corner of the backplate are a further pairing of buttons for the metering options (evaluative, center-weighted and spot) and accessing the main menu. A press of the 'menu' button brings up a trio of folders on screen, the first the shooting menu where the likes of the AF assist beam and blink detection modes can be turned on or off, the second the set up menu where sound options and LCD brightness can be tweaked, and the third being a 'My Menu' option for commonly used functions.

On the right hand flank of the camera - viewed from the back - we find covered ports for HDMI out, an optional remote shutter release cable plus combined USB 2.0/AV out connection. On the bottom is a familiar metal screw thread for a tripod, and a sliding cover for the compartment that houses the lithium-ion battery needed for power and the SD, SDHC or SDXC cards needed for image storage. Battery life is much less impressive than the G12, at around 250 shots from a full charge rather than 370, so you'll need to budget for at least one spare battery.