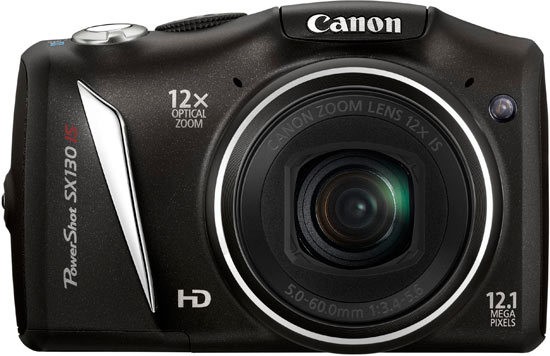 The Canon PowerShot SX130 IS is a new 12 megapixel digital camera featuring a 12x zoom lens complete with optical image stabilizer. Successor to last year's SX120 model, the Canon SX130 IS offers a more versatile focal range of 28-336mm, 3 inch LCD screen, DIGIC 4 image processor, and Face Detection complete with Face Select & Track and Face Self-Timer modes. The SX130 IS has 28 shooting modes including Smart Auto and Easy Mode for complete beginners and full manual control for more experienced photographers. A high ISO setting of 1600, 720p HD movies with stereo sound, SDXC memory card support and power in the form of readily available AA batteries complete the SX130's headline specifications. The Canon Powershot SX130 IS is priced at £199 / $249.99 / €229.00 and is available now in black or silver.

We reviewed the SX130's predecessor, the 10-megapixel, 10x zoom SX120 IS, in October 2009, and outwardly at least very little appears to have changed at first glance, apart from some subtle styling differences. There's the same tactile control layout with reasonably large buttons and dials to intentionally keep things family friendly, plus an identical 3 inch LCD screen on the rear, pop-up flash on top and large lens on the front. The lens is actually one of the few aspects of the SX130 IS to undergo any change, now offering a 12x zoom with a much more versatile wide-angle setting of 28mm, a big improvement on the SX120's 36mm optic. Less pleasing are the maximum apertures of f/3.4-5.6, respectable enough but slower then on the SX120.

Though like its forebear the SX130 IS is chunky compared with the average point and shoot, it is still smaller than the typical super-zoom or bridge camera pitched at enthusiasts, although the likes of the Panasonic DMC-TZ10 and Samsung WB650 are actually smaller whilst offering a bigger zoom. There are no higher-end features here such as a hotshoe for additional flash - merely one of the pop-up variety - while power is again provided by two standard alkaline AA batteries that slot into the base of the handgrip, as do the SD, SDHC and newly-supported SDXC memory cards. While these features are indicative of a budget model, so too is the mainly plastic build, though it's handily disguised by a matt black finish. Those two AAs also add weight and, as we found with the SX120, generally the camera feels substantial when gripped in the palm.

The front of the SX130 IS is dominated by that behemoth of a lens, the majority of which is hidden flush to the body when not in use, rapidly extending (in a couple of seconds) to maximum wideangle with a press of the slightly recessed but clearly labeled on/off button up top. On initial inspection the front of the SX130 and SX120 are identical, but look more closely and you'll see that the handgrip on the left now extends at a jaunty angle and tapers from wide to narrow, a redesign that offers more of a visual differentiation rather than any practical improvement. There's also a slightly more pronounced hump above the lens where the flash unit is, and slightly more chiselled edges. Two small holes indicate the built-in stereo microphone nestling top left and right of the lens, and over to the right-hand side of the lens we find the same rounded window housing the AF assist/self-timer lamp as found on the earlier SX120.

While the above changes are largely cosmetic, when it comes to more practical considerations there's a more important omission. As on its predecessor there's no optical viewfinder or EVF - the space instead occupied by the built-in flash. Continuing around the slight curve of the handgrip we find a loop for attaching the supplied wrist strap and a sturdy pull-open plastic cover for the AV out, DC in and USB ports. On the right hand side of the SX130 IS is the same CR1220 battery port as featured on its predecessor.

The top of the SX130 is likewise virtually identical to its predecessor. The SX130 has the exact same user-friendly control grouping as the SX120, namely a shooting mode wheel, on/off button and shutter release button encircled by a zoom lever. The mode dial is almost flush with the top of the body, although fortunately the dial itself has enough of a ridged surround to be able to turn it decisively with your thumb, and there's a cutaway portion at the camera back to allow access. It has a stiff action with a distinct click, so you're highly unlikely to shoot past the setting you want in the heat of the moment.

With the camera taking a couple of seconds to get going from cold, once again the action of the optical zoom is smooth and steady, and best of all the audible mechanical buzz of the SX120's lens has been replaced by much quieter operation which really helps when shooting movies and using the zoom. With a half press of the shutter release button the SX130 is lightning fast in determining focus and exposure, while there's no noticeable shutter delay as you go on to take the shot. Operational speed is the same as before, with the same DIGIC 4 processor on-board - current SX120 IS owners would be hard-pressed to tell the difference.

The Smart auto mode has been upgraded and now automatically chooses from 28 different scenes. Moving clockwise around the mode dial are the more creatively enticing settings of program auto, shutter priority, aperture priority and manual. The chosen mode is also shown as a virtual version on the screen, so you don't need to take your eye off your subject while making adjustments. Continuing clockwise we get a dedicated video mode, a selection of scene modes, including the four new 'creative modes', Fish-eye, Miniature, Poster and Super Vivid, plus fireworks, snow, aquarium and a Low Light ISO 3200 mode, a dedicated children and pets mode, a night scene mode, plus landscape and portrait settings and finally the no frills 'Easy mode', which turns the camera into a purely point-and shoot experience, perfect for complete beginners.

The SX130 IS now offers the advantage over some models of being able to shoot 720p HD video at 1280x720 pixels at 30fps. It boasts stereo sound courtesy of the microphones positioned either side of its lens, although sadly there's no dedicated button to activate the video feature whichever shooting mode you're in (you still have to turn the shooting mode dial). You can also take advantage of the 12x zoom during recording, although the operational speed is drastically slowed down to help prevent noise during recording, and you can use the Miniature Effect, Colour Accent and and Colour Swap creative filters to spice up your footage. Overall a big improvement on the SX120's video mode.

The handy auto red-eye correction feature is accessible via a flash settings option that's rather hidden away among the SX130's menu screens. Red eye reduction can also be turned on/off in capture mode by delving into the same menu; like the SX120 it's not included among the options accessed via the dedicated flash button at the rear, but at least here it's 'on' that handily appears to be the default setting rather than 'off'.

Moving to the back of the SX130 IS, we find a 3-inch LCD with a rather disappointing resolution of 230k dots, identical to its predecessor's. Playback has its own button on the camera back, rather than squeezing in among the modes on the top dial. The display and menu buttons are located beneath the rather fiddly four-way control pad-come-command wheel that remains centre right of the LCD. As noted in our review of the SX120, when you come to access the options set at four points around the control pad/command wheel it's easy for your thumb to slip round to the adjacent setting. Being pre-aware of its liveliness, this time around it didn't irritate so much, but it's a little too easy to inadvertently change the wrong setting.

A press of 'menu' in capture mode brings up two folders on screen, one with shooting options and the second with more generic set-up features. A press of 'menu' in playback gives access to both image review plus print selection folders, while the third folder is the same set up menu. If you've used a Canon camera before, the menus will be immediately familiar: their design pretty basic but easy to navigate because of it. Mirroring these two buttons above the command wheel are a dedicated face detection button (on/off) and exposure compensation button (-/+ 2EV).

Face Detection works well, with the DIGIC 4-powered system capable of recognising up to 35 faces in a scene and automatically adjusting the focus and exposure settings. Face Detection includes the Auto Red-Eye Correction, Face Detection AF/AE/FE, and Face Self-Timer technologies – the latter feature waits until it detects a new face in the frame before taking the shot. Face Select & Track allows a particular face to be tracked as they move around the frame, making sure that your chosen subject is always in focus and well-exposed.

As you'd expect when up-ending the camera, the base of the SX130 features a plastic screw thread for a tripod and a compartment storing the two AAs and SD memory card, opened by flicking the substantial catch and pressuring it proud of the unit. Closing it is a little awkward however as you have to press down on the two AAs as you're sliding it shut.

Just like its predecessor, the SX130 IS is an evolutionary upgrade, falling into the same incremental yearly cycle that a lot of modern compact cameras seem to follow, with a wider-angle lens and HD movies with stereo sound and use of the optical zoom being the new standout highlights.