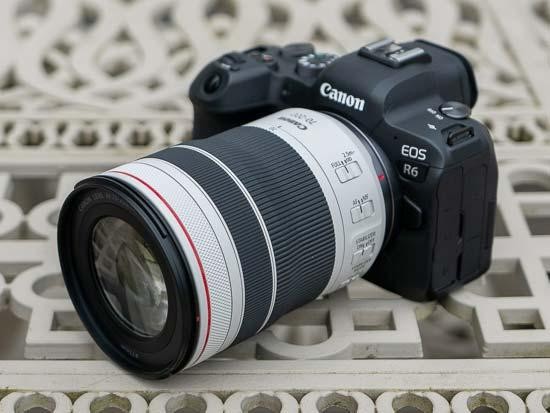 Introduced in November 2020, the new RF 70-200mm f/4L IS USM lens for the Canon EOS R series of full-frame mirrorless cameras is a physically smaller and more affordable addition to its range of professional zoom lenses.

Optically, the lens design is comprised of 16 elements in 11 groups, including four UD (Ultra-Low Dispersion) elements to help minimize chromatic aberrations and color fringing. An Air Sphere Coating has been applied to lens elements to reduce backlit flare and ghosting.

As this is an L series lens, Canon says the RF 70-200mm F4L also boasts the highest possible build quality, which includes weather-sealing that protects against dust and moisture and fluorine coatings on both the front and rear elements to guard against water droplets and dust.

An Optical Image Stabilizer helps to minimize the appearance of camera shake by 5 stops, or up to 7.5 stops of correction when paired with an EOS R camera body with IBIS. There are three different IS modes on offer.

The lens has a configurable Control Ring which can be used to adjust a variety of exposure settings, including aperture, ISO, and exposure compensation.

It also features a Dual Nano USM auto-focusing system incorporating both a ring type USM and an STM mechanism, fast, nearly silent autofocusing with full-time manual focus override, and a 9-blade aperture for more attractive out of focus areas.

The RF 70-200mm F4L IS USM lens is officially the World's shortest and lightest 70-200mm lens with a maximum aperture of f/4 for 35mm full-frame cameras.

It weighs in at a mere 695g and measures just 11.9cm in length. This makes it a little longer than a tin of baked beans and a little shorter than a can of beer!

This is because the new RF lens uses an extending barrel design, whereas the EF 70-200mm F4L has a fixed, non-retractable design with internal zooming, so it does not extend at all when zoomed out from 70mm to 200mm.

It's far too soon to know about the long-term sealing of the RF 70-200mm F4L IS USM and whether it will suffer from dust and moisture ingress due to the zooming mechanism, but the extending/retracting design definitely makes it astonishingly compact.

We’ve been testing it with the latest EOS R6 camera, where it feels very well-balanced indeed, but due to its small size and light weight it would probably also feel very much at home on one of the smaller EOS R bodies like the EOS RP.

As you'd expect from a Canon L-series lens, the RF 70-200mm F4L feels very well built, with the dust and moisture resistant weatherproofing giving you confidence that you can shoot using this lens in all kinds of different conditions. The lens barrel uses engineering plastics and the mount is a high-quality metal construction, which again feels very strong and secure.

On the right-hand side of the lens is a Lock switch, which can be used to prevent the lens from extending when it's set to the shortest 70mm focal length, which is useful when transporting it.

On the left-hand side of the RF 70-200mm F4L there are four switches. At the top is a Focus Limiter switch with two settings, Full or 2.5m to Infinity.

Next is the AF/MF switch which sits just above an image stabiliser switch, which can be set to either on or off. Underneath that is the Stabilizer Mode switch, which has three settings marked 1 / 2 / 3. Mode 1 is suitable for general photography, mode 2 operates only during the exposure, and mode 3 is best for panning shots.

Around the Canon RF 70-200mm F4 lens there are three different rings to take note of. Towards the rear of the lens, you’ll find the largest ring, which controls the zoom of the lens.

It is marked with four different focal lengths to help quickly jump to the focal length you want - 70, 100, 135 and 200mm. The zoom ring is ridged to help you get a good grip on it, and like the rest of the lens feels very sturdy and high-quality.

At the front of the lens there's the Control Ring which you can use for different settings which you can customise from the camera body. Depending on what you want to do, you can use it to change aperture, shutter speed, ISO or exposure compensation. You can also turn it off.

This ring has a different texture to the other two rings so you can find it easily without looking at the lens. It’s worth noting that this lens clicks as you rotate it - that’s helpful for hearing or monitoring as you change a setting, but is less useful if you’re shooting video rather than stills.

Between the Control Ring and the zoom ring, you’ll find the manual focusing ring which is about a third of the size of the zoom ring.

It is similarly ridged to the zoom ring, but feels slightly different - if you’re not looking at the lens, you should be able to feel the difference in textures quite easily.

The motor-assisted focusing ring has just enough give to it to precisely fine-tune the manual focus, without being too tight or too loose. Full-time manual focus override is also available by at any time simply by rotating the focus ring to make fine adjustments.

There are no hard stops at either end of the range, making it harder to set focus at infinity, and unlike the EF version, there's no distance scale on this lens - instead the camera body displays it graphically on-screen.

Auto-fcusing proved to be extremely quick, quiet and accurate for the majority of the time. The hit rate when using it in conjunction with the EOS R6 camera was very high, making it ideal for capturing exactly the right moment during sports and action photography.

The autofocusing is also very quiet, making it ideal for discreet situations as well as for use while filming videos. Focusing is internal, meaning the front element of the lens doesn’t move when focusing or zooming. You can therefore use it easily with filters, the thread being 77mm in size, which is larger than the 72mm thread on the EF 70-200mm f4L.

At the very front of the Canon RF 70-200mm F4L IS USM lens, you’ll see the distinctive red ring which adorns all Canon L series “professional” lenses. It doesn’t do anything, but it marks out the lens as belonging to the high-end range.

Unlike the larger, more expensive RF 70-200mm F2.8L, the F4 version does not have a removable tripod collar/foot or any tripod mounting point at all, unlike the EF version which does at least have a tripod collar available as an optional extra.

A high-quality lens hood (ET-83G (WIII)) is included in the box. It's easy to attach the hood to the lens, as a red dot on the hood matches up to a red line on the lens itself. The lens hood can also be reversed for ease-of-transport.

Unfortunately, this particular hood lacks a sliding window to allow for rotation of a circular polarizer, unlike the one supplied with the RF 70-200mm F2.8L.

There’s also a lens pouch (but sadly no hard case), as well as front and rear caps, provided in the box.

This is a lens which is designed for full-frame cameras only, which makes the 70-200mm focal length exactly what you get. If you engage crop shooting mode on a Canon EOS R-series camera body, the equivalent focal length needs to be multiplied by 1.6x, giving you an equivalent range of 112-320mm.

At the 70mm focal length the angle of view is 34 degrees.

At the 200mm focal length the angle of view is 12 degrees.

Usually seen as purple or blue fringes along high-contrast edged in a photograph, chromatic aberration can be a problem for some lenses. With the Canon RF 70-200mm F4L IS USM lens however it is extremely well-controlled, to the extent that it's very difficult to find examples of any kind of fringing occurring at all. An extremely impressive performance.

When shooting at the maximum aperture of f/4, you can see some light vignetting at 70mm. It’s not hugely noticeable when shooting normal subjects, but you can see it when photographing a white wall. The effect is more pronounced when shooting at 200mm. Throughout the focal lengths, the problem almost completely disappears when you close down the aperture to f/8.

There is some slight pincushion distortion across the entire 70-200mm focal length range. This effect is well controlled though and can be eliminated in editing software without a compromise on final image quality.

The lens is quite susceptible to flare when shooting directly into the sun, though, even with the lens hood that is supplied in the box fitted.

The following examples illustrate how close you can get to the subject with the lens set to 200mm to aid magnification.

One of the reasons to buy a fast lens is to be able to isolate the subject from the background, and the Canon RF 70-200mm F4L IS USM has an iris diaphragm with 9 rounded blades for a fairly pleasing rendering of the out-of-focus highlights.

Below you'll find some examples, but you are also encouraged to check out our sample images.

In order to show you how sharp the Canon RF 70-200mm F4L IS USM lens is, we are providing 100% crops on the following pages.