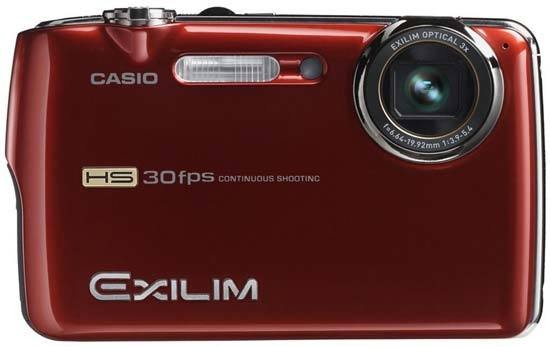 All of the sample images in this Review were taken using the 9 megapixel Fine JPEG setting, which gives an average image size of around 4Mb.

The Casio EX-FS10 produces images of good quality. The biggest issue is noise and loss of detail at relatively slow ISO speeds. The 1/2.3 inch, 9 megapixel sensor recorded noise-free images at ISO 100, but there's already some noise and slight softening of detail at ISO 200. ISO 400 shows a little more noise, loss of fine detail and significant colour desaturation, and ISO 800 and 1600 are even worse, with obvious loss of fine detail and even more noise. The Casio EX-FS10 handled chromatic aberrations very well, with limited purple fringing effects appearing only in high contrast situations and generally at the edges of the frame. The built-in flash worked well indoors, with no red-eye and good overall exposure. The night photograph was poor, with the maximum shutter speed of 4 seconds not being long enough for most after-dark shots, resulting in under-exposure. Anti-shake is a feature that sets this camera apart from its competitors and one that works very well when hand-holding the camera in low-light conditions or when using the telephoto end of the zoom range. Macro performance is below par, allowing you to focus as close as 10cms away from the subject. The images were soft straight out of the Casio EX-FS10 at the default sharpening setting and ideally require some further sharpening in an application like Adobe Photoshop, or you can change the in-camera setting.

There are 5 ISO settings available on the Casio EX-FS10. Here are some 100% crops which show the noise levels for each ISO setting.

The Casio EX-FS10 has 3 different image quality settings available, with Fine being the highest quality option. Here are some 100% crops which show the quality of the various options, with the file size shown in brackets.

The Casio EX-FS10 handled chromatic aberrations excellently during the review, with just a small amount of purple fringing present around the edges of objects in certain high-contrast situations, as shown in the example below.

The Casio EX-FS10 offers a Macro setting that allows you to focus on a subject that is 10cms away from the camera when the lens is set to wide-angle. The first image shows how close you can get to the subject (in this case a compact flash card). The second image is a 100% crop.

The flash settings on the Casio EX-FS10 are Auto, Flash Off, Flash On, and Red Eye Reduction. These shots of a white coloured wall were taken at a distance of 1.5m.

And here are some portrait shots. As you can see, neither the Flash On or the Red-eye reduction settings caused any amount of red-eye.

The Casio EX-FS10's maximum shutter speed is 4 seconds in the Night Scene Best Shot mode, which is disappointing news if you're seriously interested in night photography, as it doesn't allow you to capture enough light in most situations. The shot below was taken using a shutter speed of 2 seconds at ISO 100. I've included a 100% crop of the image to show what the quality is like.

The Casio EX-FS10 has an electronic anti-shake mechanism, which allows you to take sharp photos at slower shutter speeds than other digital cameras. To test this, I took 2 handheld shots of the same subject with the same settings. The first shot was taken with anti shake turned off, the second with it turned on. Here are some 100% crops of the images to show the results. As you can see, with anti shake turned on, the images are much sharper than with anti shake turned off. This feature really does seem to make a difference and could mean capturing a successful, sharp shot or missing the opportunity altogether. Be warned though that the system increases the ISO speed to minimize subject movement, with the User Guide stating that "Shooting with Anti Shake can cause an image to appear somewhat coarser than normal and can cause slight deterioation if image resolution".

The Casio EX-FS10 can shoot an incredible 30 frames in just 1 second (the resolution automatically drops to 6 megapixels). After the sequence of shots has been captured, the camera takes around 10 seconds to process them, during which no further pictures can be taken. This montage demonstrates what 30 frames per second can actually capture.