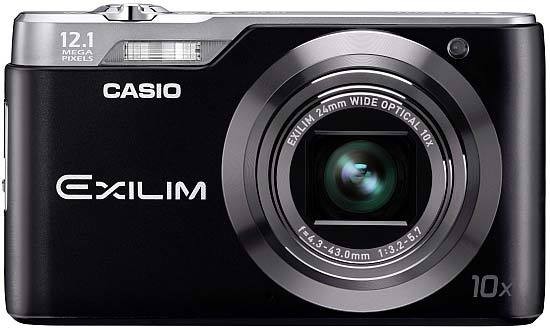 The Casio EX-H5 is an affordable travel-zoom camera, offering a 10x wide-angle zoom lens with a focal length of 24-240mm and a CCD-shift image stabilization mechanism. The 12 megapixel EXH5 boasts a headline grabbing battery life of 1,000 shots, a 2.7-inch LCD monitor, and 720p HD movies. The Engine 5.0 image processor increases operational speed by 30%, and there's an improved Dynamic Photo function and numerous Best Shot modes. Available in black, red and silver, the Casio EX-H5 retails at £149 in the UK, €199 in Europe and $199.99 in the USA.

The metal and plastic bodied Casio EX-H5 is a simplified and crucially cheaper version of the company's higher-end EX-H15 travel zoom camera. Casio is describing the EX-H5 as a high speed - thanks to the incorporation of a new fifth generation Exilim Engine - high zoom compact camera (hence the 'H' in the model name). At £149 / $199.99 it's certainly a very reasonably priced option in its class, which also includes Panasonic's TZ series, Canon's PowerShot SX210 IS, Kodak's Z950 and Samsung's WB500 and WB650 models, to name but a few.

The EX-H5 boasts a zoom of the 10x optical variety, starting out at a wideangle 24mm equivalent in 35mm film terms, which should make it as adept at landscapes and group portraits as candid close ups from afar. Because of this broader than average 24-240mm focal range, like its similarly equipped competitors it's inevitably slightly wider in depth (29.1mm with protrusions, officially) and overall bulkier than cameras with more modest 3x or 5x zooms. The EX-H5 feels reasonably weighty for a pocket model too at 174g without the battery and optional SD/SDHC memory card inserted, and sturdily constructed also.

As well as including an extra helping hand to avoid blur in the form of CCD shift stabilization, the EX-H5 ticks most of the boxes for the latest must-haves in other areas, including a 12.1 effective megapixel resolution from a 12.39MP 1/2.3-inch square CCD and a 2.7-inch LCD with an average 230,400 dot resolution screen. There's also - of course - the now ubiquitous 1280x720 pixels HD movie recording.

To set it apart from the competition the EX-H5 includes a couple of the technologies that Casio has been pushing of late: a unique Dynamic Photo function that allows cutting and pasting from one image shot in continuous shooting mode to another, and an extra long battery life - here claimed to be a whopping 1,000 photos from a single charge. Impressive stuff, when the competition averages about 250.

Various artistic digital effects are selectable from within its comprehensive range of 42 Best Shot scene and subject settings - accessed by pressing the Set button and then selecting the BS icon - and applied to ape a watercolour, oil painting, sepia tinged print or crayon drawing. A gimmick perhaps, and yet the results are surprisingly effective, being of particular use to those of us not skilled enough to achieve similar in an image editing package.

From the front the EX-H5 appears smart if conventional in its design, our review sample coming in a rather fetching red. That lens starting at a wider than most 24mm equivalent is squirreled away and protected within the body when the camera is inactive, helping maintain as compact-as-possible dimensions for portability, top right of which is a small window for the self timer lamp / AF assist light.

Bottom left of the lens is a small pinprick housing the built-in microphone and above is a narrow window housing the integral flash. There's absolutely no hand-grip on the EX-H5 except for a pad of four small raised nodules at the rear, with the smooth and shiny front of the camera unadorned except for the Exilim logo. In truth though you'll want to use both hands to hold the camera as steady as possible when shooting.

On the camera's top plate the shutter release button is in turn encircled by a lever for operating the zoom, next to which we find a recessed, small, on/off button. Press this and the model powers up from cold in just over two seconds, lens extending to maximum wideangle setting from its storage position within the body. With a half press of the shutter release button the camera takes a brief moment to determine focus and exposure, AF point highlighted in green accompanied by a bleep of affirmation. Go on to take the shot and with no discernible shutter delay, maximum resolution images are committed to memory in just over a second, screen momentarily blanking out and then presenting a preview of the capture shot. That's commendably swift for this class of camera.

The EX-H5's zoom is fast to respond, though its adjustments and transitions are accompanied by a rather loud mechanical buzz; still it powers through its 24-240mm equivalent focal range in just less than two seconds if you keep a finger on the 'trigger'. The fact that the zoom is operated by a control placed in this position has another advantage: it leaves room at the top right of the camera back (where a zoom rocker switch might otherwise be located) for a dedicated video record button for the 720p movies, recorded at 1280x720 pixels at 30fps in the AVI format.

The 2.7-inch LCD on the backplate is merely average in terms of size and resolution, but in the absence of an optical viewfinder it is at least bright and clear in terms of visibility. Swallowing up most of the available space, the remaining controls are ranged in a row top to bottom on the right. We've already mentioned the convenience of the one touch video record button - although, scandalously, the optical zoom isn't accessible in this mode - beneath which is another button for switching to stills capture.

Under this again is a familiar control pad, with a 'Set' button at the centre for implementing chosen menu options. With the pad marked 'Display' at its 12 o'clock setting and featuring Flash control at six o'clock, operation is again straightforward. Users get a choice of the usual flash settings, including red eye reducing option, along with a soft flash setting.

Press that central 'set' button meanwhile and a toolbar of essential shooting functions appears on the right hand side of the screen, running top to bottom. Again, as a time saver this conveniently avoids having to dip into the menu folders proper and search for basic options. From the top we have the ability to determine image quality and pixel count, flash (again) and focus options (AF, macro focus, infinity focus and even a manual option: the latter presenting a histogram and an adjustable focus distance of between 50cm and infinity).

AF modes are further adjustable between intelligent AF, spot, multiple area and AF tracking. Next down the toolbar are the Continuous Shooting options, with Normal, 4fps, 10fps, Flash and Off, then choices of self timer between 10 and two seconds and a further kind of self timer bracketing option that fires three consecutive shots with an interval of a second between each. Unfortunately there's no quick way to adjust either the ISO speed or Exposure Compensation without having to dip into the Menu system.

Beneath the EX-H5's control pad are two buttons, one for Playback and a smaller one for deleting images. The Main menu mode and the 'BS' (BestShot) scene and subject modes are accessed from the Set onscreen column of icons. The photo thumbnail illustrated Best Shot modes govern all the familiar subjects from portraits and self-portraits through pictures of autumn leaves, fireworks, flowers and food, plus backlight and high sensitivity modes joining the yet-more-creative Art Shot modes mentioned at the outset of our review. We even get help here with taking ID photos for passports, photographing business cards and presentation boards, along with a pre-record movie function for anticipating action sequences.

The Main menu has three sub folders that can be tabbed between: Record, Quality and Set Up. Within the Record menu photographers can switch between 4fps and 10fps continuous shooting modes, turn Anti Shake on or off, and call up a nine zone compositional grid to practice the 'rule of thirds'. Within the Quality folder as expected resolution of both stills and video can be adjusted to suit the intended end purpose. It's under the 'quality' heading that we also find the means of manually adjusting exposure (+/- 2EV), white balance, ISO (ISO64-3200), metering (multi zone, centre weighted or spot) plus applying a palette of colour filters to variously warm or dampen the image.

In the Set Up menu, users have the ability to turn Eye-Fi connectivity on, should they have a suitable Eye-Fi media card loaded that will provide automatic wireless uploading whenever they come within reach of their desktop PC or laptop. Otherwise operational sounds, start up visuals and time stamps can be governed in this mode as expected, though like us you're probably most likely to access it to format the card in use and quickly delete all the images contained therein.

While operationally, that's about it for the EX-H5, on the camera's right hand flank next to a lug for attaching a wrist strap we find a protected port for a single yet dual purpose AV/USB output. No HDMI here for hooking the camera directly up to a flat panel TV though, which is slightly disappointing as this is fast becoming a must have feature, even for modestly priced compacts such as this.

The base of the camera meanwhile features a slightly off-centre plastic screw thread for attaching a tripod, just next to a shared compartment for the battery and memory card. Whilst we didn't get close to the 1000 images the company promises in terms of battery life, the camera did manage over 800 shots before needing to be recharged. So, the upshot is that this is a camera you could take away on holiday for a week and not have to worry about having to constantly charge the battery every day.