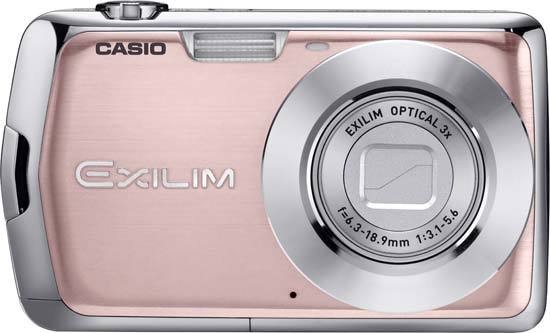 Reviews of the Casio EX-Z1 from around the web.

The Z1 certainly makes a good first impression. It has a strong all-metal body with coloured semi-matt panels and plenty of bright chrome trim. Like most Casio compacts the Z1 is available in a wide range of colours, including black, silver, blue, purple, pink and the gold of my review sample. It is an exceptionally slim camera, just 20mm thick including the lens surround, although as usual whoever wrote the spec sheet measured it ignoring this somewhat vital feature, giving a figure of 17.8mm. It's also very light, weighing approximately 120g including battery and memory card. With its sleek shape and rounded edges it slips easily into a shirt pocket.
Read the full review »

'Sleek and sturdy' is, we're told, the design concept behind the Casio Exilim EX-Z1. Sleek it certainly is, though its sturdiness is unproven. It feels well-made, but it's not guaranteed waterproof or shockproof or anything like that. That's a pity, because, with a typical street price of £150 or so, this 10-megapixel camera needs something clever to distinguish it from the rest.
Read the full review »