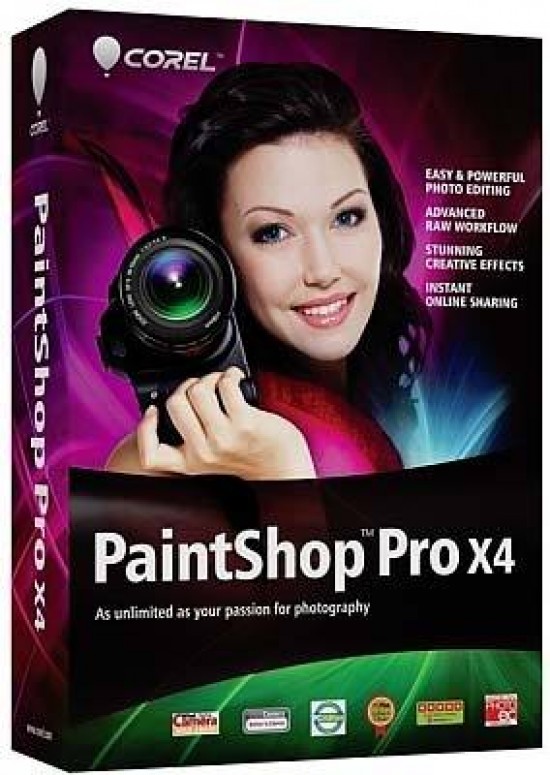 We reviewed the more expensive Corel PaintShop Pro X4 Ultimate, which comes on two discs with the first disc holding X4 and the second Nik Color Efex Pro 3, royalty free images from Fotolia and a collection of picture tubes. 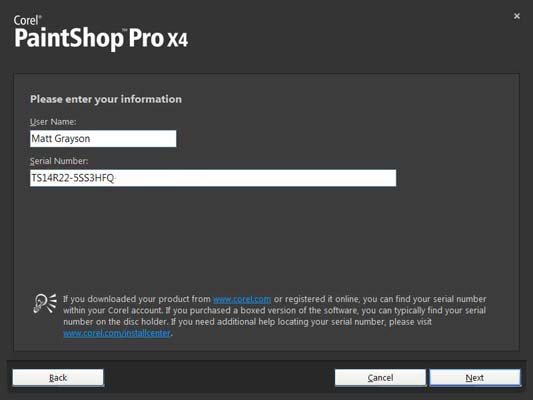 After accepting the terms & conditions which must always be thoroughly read, we clicked the acceptance box and pressed next. A nice touch is that our name was already input into the Username box. The impossibly long serial number was typed in below before going through to the next stage. After choosing the file destination and language, installation will get under way. While Corel PaintShop Pro X4 is loading, it shows you a few different tools that are available. It looks pretty exciting so far!

Installation for us took just over 10 minutes. The program won't launch automatically so you have to do it yourself from the desktop icon.

After Corel PaintShop Pro X4 has launched, a welcome page will pop up over the main desktop that aids getting started if you're new to the program.  It takes you through three single instruction pages that illustrate what each section of the program do. It's laid out in a similar fashion to Adobe Lightroom and this echoes a lot of programs these days. 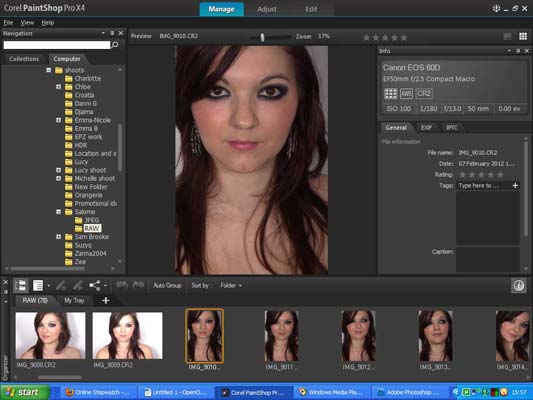 The three main pages are called Manage, Adjust and Edit. The first page (Manage) is for tagging and filing pictures you've loaded into Corel PaintShop Pro X4. A browser of your computer files is located on the left with EXIF data displayed on the right. You can tag the pictures chronologically using the calendar, with keyword tags or with star ratings. If you're completely new to this and maybe starting out in photography, this tagging trend may seem exhausting but will save hours of searching in the future. If you find that two years down the line you need pictures of a beach scene, you can simply type the keyword into the search field and it will find all pictures you tagged with that word. For our examples, we had 80 pictures to tag so we used the collections tab on the left of the window. Clicking on tags, we could add words that we wanted to use on the pictures. We then highlighted the pictures we wanted to apply those words to and dragged the thumbnails to the keyword list.

Once your pictures are tagged and filed properly, you might want to edit them. Obviously, ours were perfect (!) but we made some adjustments for the purposes of this review. 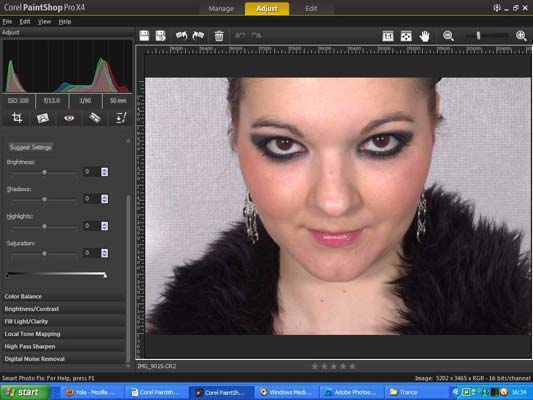 The Adjust tab is designed for speedy editing. It contains a lot of the most used tools that you'll see on a normal editing suite worktop. The picture you want to edit is loaded into a large screen on the right while the tools are lined up down the left. A histogram sits in the top left corner with individual RGB readings. Below this are five tools; crop, straighten, red-eye, make-over and clone.

The most used tools are quite intelligently selected and include tone mapping, light, colour balance, high pass sharpen and noise removal. There's a suggest settings button on the Smart photo fix tool if you want the program to do the donkey work. It's basically Adobe's Auto button on the Adjustments boxes in the Creative Suites.

We first played with the make-up tools in Corel PaintShop Pro X4 and found them a little overbearing in places such as the teeth whitening. The tan tool is intelligent enough to only hit skin which is great. However, the same old problem of processing speed means PaintShop Pro falls foul again. Processing a close up shot of a person with the sun tan tool took ages and really slowed the computer down. Also when we tried the other tools on the left and decided to use the sliders for big changes (to get an idea of how capable they are), we found that we could only slide them so far before the program started making the changes and froze our actions. It's extremely frustrating because we hadn't finished so it shouldn't be making changes if it can't cope. 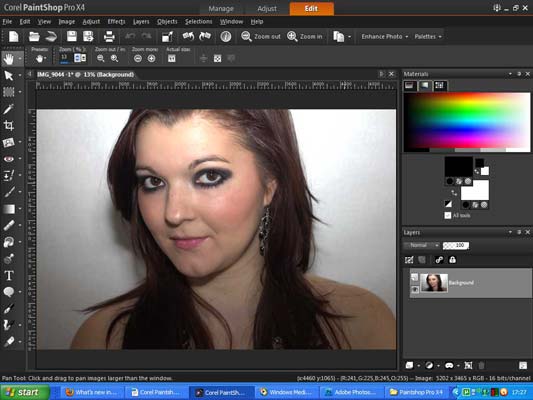 Moving into the Edit page will open up the Camera RAW lab if you're using RAW images. In this window, you can adjust white balance, reduce noise, recover highlights and change the brightness, saturation and shadow levels. Clicking the edit button will load the picture into the main program.

When you first open the Edit page there will be a learning centre tab on the right and the thumbnails of the folder you opened at the bottom. This makes the page look really crowded so you may want to close them down. There's still a ridiculous amount of tools available on the worktop. At first this looks messy but it 's probably down to the fact that the icons are larger than Photoshop or GIMP and we soon got used to it. There's also more on show such as direct print and scan buttons.

Many familiar tools are present and a couple are not so familiar. The Edit page certainly works faster than the Adjustments page and it's a possibility that this is why it's been separated. The tools work well enough although they have their own way of doing things. For example, setting the clone tool base point is done by pressing shift instead of alt and it doesn't show you a preview the same way that Photoshop CS4 and newer does.