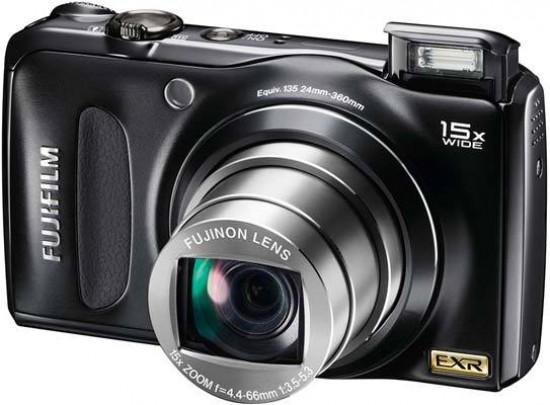 Given the camera's showy exterior, zoom range and general responsiveness, we were looking forward to seeing how our Fujifilm FinePix F300EXR test shots had panned out, and sad to say though in general terms we were happy we were nevertheless a little disappointed with it.

In terms of sharpness and clarity, though good results are possible if weather conditions are perfect, the camera is no Panasonic LX5 (more expensive), nor even Ricoh CX4 (cheaper). The Fujifilm FinePix F300EXR struggled with brighter conditions, introducing burnt out highlights and the ghoulish spectre of purplish pixel fringing between areas of high contrast. If anything there's a tendency to over-expose rather than under expose to preserve detail.

Plus, colour wise, we felt the images were generally a little flat, dull and lacking in oomph, except when selecting Velvia mode, which matches the warmer results most point and shoot competitors provide on default standard settings. As usual with Fujifilm compacts and their EXR sensors, we struggled to tell the difference between images taken on one setting and another, so certainly its advantages are not for the most part that pronounced.

In terms of low light shooting without flash and ISO performance, noise doesn't start to intrude significantly until ISO 800, so that much is par for the course. At ISO 1600 we're losing edge definition and the image is beginning to take on a more painterly aspect. And so it continues at ISO 3200, losing both colour with a compensatory resolution drop and definition at ISO 6400 and at top whack ISO 12800 setting, pictures appear as if they're being viewed through a frosted shower screen. So stick to ISO 400 or below if you want to avoid the appearance of grain entirely.

Overall then, in terms of image quality the Fujifilm FinePix F300EXR gets a 'could do better' from us. It's a shame, because in most other respects the F300EXR is spot on for features and usability.

There are 8 ISO settings available on the Fujifilm FinePix F300EXR. Here are some 100% crops which show the noise levels for each ISO setting.

The Fujifilm FinePix F300EXR didn't handle chromatic aberrations particularly well during the review, obvious purple fringing present around the edges of objects in high-contrast situations, as shown in the examples below.

The Fujifilm FinePix F300EXR offers a Macro setting that allows you to focus on a subject that is 5cms away from the camera when the lens is set to wide-angle. The first image shows how close you can get to the subject (in this case a compact flash card). The second image is a 100% crop.

The Fujifilm FinePix F300EXR's maximum shutter speed is 8 seconds in the Manual mode, which is fairly good news if you're seriously interested in night photography. The shot below was taken using a shutter speed of 3 seconds at ISO 200. I've included a 100% crop of the image to show what the quality is like.

The Fujifilm FinePix F300EXR allows you to take panoramic images very easily, by 'sweeping' with the camera while keeping the shutter release depressed. The camera does all the processing and stitching, with he main catch being that the resulting image is of fairly low resolution.