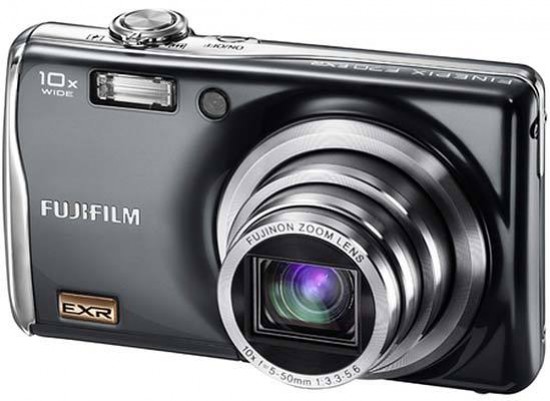 The Fujifilm FinePix F70EXR produced images of very good quality during the review period. The 10 megapixel sensor produces noise-free images at ISO 100 and 200, with some limited noise starting to appear at ISO 400. ISO 800 exhibits fairly visible noise and loss of fine detail but is still very usable, while ISO 1600 and 3200 are even noisier. The fastest but reduced-resolution settings of ISO 6400 and 12800 aren't really worth using. Setting the camera to EXR - High ISO & Low Noise Mode produces slightly less noisy images at each equivalent setting, but the image resolution drops to 5 megapixels, the range is only 100-1600, and to be honest the difference between the two modes isn't as pronounced as we'd have hoped.

The D-Range Priority (DR) mode is much more successful, resulting in images that have noticeably more dynamic range that those shot in the Resolution Priority (HR) mode, and far surpassing other compact cameras. If you want to shoot images that retain detail in both the highlight and shadow areas, this mode and this camera are made for you. The new Pro Focus and Pro Low Light modes are useful additions, although their reliance on combining multiple exposures limits their versatility.

The F70EXR suffered from chromatic aberrations, with obvious purple fringing effects appearing in high contrast situations. The pop-up flash worked well indoors, with no red-eye and adequate exposure. The wide-angle lens did exhibit obvious barrel distortion at the 28mm setting. The night photograph was good, with the maximum shutter speed of 8 seconds allowing you to capture enough light in most situations. Anti-shake works very well when hand-holding the camera in low-light conditions or when using the 280mm telephoto end of the 10x zoom range. Macro performance is merely average, allowing you to focus as close as 5cms away from the subject. The images were a little soft straight out of the camera and ideally require further sharpening in an application like Adobe Photoshop, as you can't change the in-camera setting if you don't like the default results.

There are 8 ISO settings available on the Fujifilm FinePix F70EXR. Here are some 100% crops which show the noise levels for each ISO setting. On the right are 100% crops showing the ISO range of the EXR - High ISO & Low Noise mode, which captures 5 megapixel images from a more limited ISO range of 100-1600.

The Fujifilm FinePix F70EXR's 10x zoom lens offers a versatile focal range for such a compact camera, as illustrated by these examples:

The Fujifilm FinePix F70EXR frequently suffered from chromatic aberrations during the review, with obvious purple fringing present around the edges of objects in any high-contrast situation, as shown in the examples below.

The Fujifilm FinePix F70EXR offers a Macro setting that allows you to focus on a subject that is 5cms away from the camera when the lens is set to wide-angle. The first image shows how close you can get to the subject (in this case a compact flash card). The second image is a 100% crop.

The Fujifilm FinePix F70EXR's maximum shutter speed is 8 seconds in the Manual mode, which is fairly good news if you're seriously interested in night photography. The shot below was taken using a shutter speed of 8 seconds at ISO 100. I've included a 100% crop of the image to show what the quality is like.

The Fujifilm FinePix F70EXR's Pro Focus scene mode creates images with a shallow depth of field, with the camera taking a rapid series of exposures at different focal points and aligning them to produce a single frame showing a sharply focused subject against a soft, out-of-focus background.

The Fujifilm FinePix F70EXR's Pro Low-Light scene mode produces better image clarity at high ISO levels, with the camera taking a series of four high sensitivity/low-noise shots in quick succession which are then combined together using in-camera processing into an image with less noise than the single exposures.