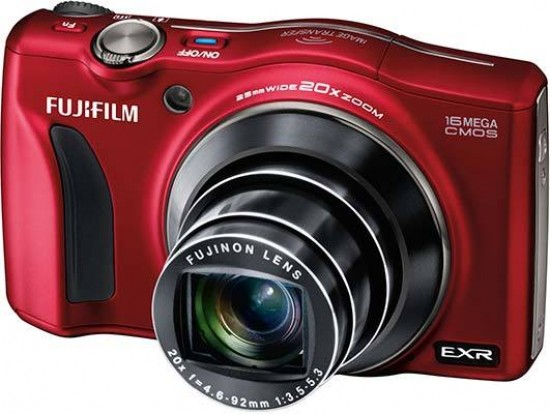 The Fujifilm FinePix F800EXR only produced images of above average quality during the review period. It didn't handle noise very well at all, first appearing at the base ISO speed of ISO 100 and then becoming progressively worse at the slightly faster settings of ISO 200 and 400. At ISO 800 there's more noise and smearing of fine detail, while the fastest full-resolution settings of ISO 1600 and 3200 suffer from an even greater loss of detail and colour saturation. The headling-grabbing settings of ISO 6400 and 12800 are both actually shot at a reduced resolution (medium and small respectively) and they're noisy too. All in all, not a great result.

Chromatic aberrations were well controlled, with limited purple fringing effects appearing only in high contrast situations. The 16 megapixel images were just a little soft straight out of the camera at the default sharpen setting and require some further sharpening in an application like Adobe Photoshop, or you can change the in-camera sharpening level.

Macro performance is excellent, allowing you to focus as close as 1cm away from the subject when the lens is set to wide-angle. Commendably barrel distortion is well controlled even at the 25mm focal length. The built-in flash worked well indoors, with no red-eye and adequate overall exposure, although there is noticeable vignetting at 25mm. The anti-shake system works very well when hand-holding the camera in low-light conditions or when using the telephoto end of the zoom range. The maximum shutter speed of 30 seconds allows the cameras to capture enough light for most after-dark situations.

There are 8 ISO settings available on the Fujifilm FinePix F800EXR. Here are some 100% crops which show the noise levels for each ISO setting:

The Fujifilm FinePix F800EXR's 20x zoom lens provides a focal length of 25-500mm in 35mm terms, as demonstrated below.

The Fujifilm FinePix F800EXR has 2 different image quality settings available, with Fine being the highest quality option. Here are some 100% crops which show the quality of the various options, with the file size shown in brackets.

The Fujifilm FinePix F800EXR handled chromatic aberrations very well during the review. Just a little purple fringing was present around the edges of objects in high-contrast situations, as shown in the examples below.

The Fujifilm FinePix F800EXR offers a Super Macro setting that allows you to focus on a subject that is 1cm away from the camera. The first image shows how close you can get to the subject in Macro mode (in this case a compact flash card). The second image is a 100% crop.

The flash settings on the Fujifilm FinePix F800EXR are Auto, Forced Flash, Suppressed Flash, Slow Synchro, and any of those modes combined with Red-eye Reduction. These shots of a white coloured wall were taken at a distance of 1.5m.

The Fujifilm FinePix F800EXR's maximum shutter speed is 30 seconds, which is great news if you're seriously interested in night photography. The shot below was taken using a shutter speed of 8 seconds at ISO 100.

The new Intelligent Digital Zoom function can digitally boost the optical 20x zoom up to 40x, the equivalent of a 1000mm focal length.

The Fujifilm FinePix F800EXR's Pro Focus mode makes it easier to achieve a blurred background, perfect for portraits where compact digicams traditionally struggle, with three strengths of blurring on offer.

The Fujifilm FinePix F800EXR's Pro Low-Light scene mode produces better image clarity at high ISO levels, with the camera automatically taking a series of four high sensitivity/low-noise shots in quick succession which are then combined together using in-camera processing into an image with less noise than the single exposures. The main drawback is a noticeable softening of fine detail.

In the Multiple Exposure advanced mode the Fujifilm FinePix F800EXR can combine two seperate images into one, as shown in the example below.

The Fujifilm Finepix F800EXR offers 5 different film simulation modes to help replicate the look of your favourite film stock from the past.

The new Advanced Filter mode on the Fujifilm FinePix F800EXR offers six artistic special effects to help customise the look of your images as you take them.

The Fujifilm FinePix F800EXR allows you to take panoramic images very easily by 'sweeping' with the camera while keeping the shutter release depressed. The camera does all the processing and stitching, and there are three views available. The main problems are that the resulting image is of fairly low resolution - 1080 pixels high and 5760 pixels wide for the 360 degree image - moving objects are recorded as "ghost" images, and different lighting sources cause obvious vertical streaks to appear.