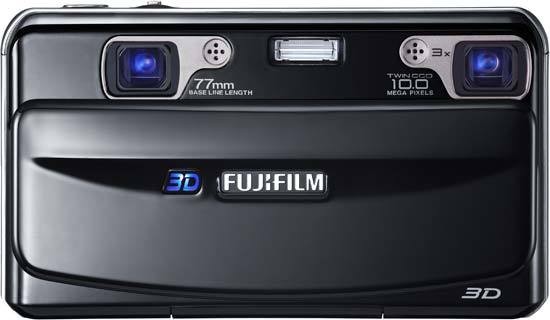 Reviewing the Fujifilm Finepix Real 3D W1 has proved both an enjoyable and frustrating experience. Enjoyable in the sense that this a truly remarkable first-generation product, capable of creating convincing 3D photos at the push of a button, but frustrating in that they can only be viewed (currently) on the camera's LCD screen or the optional V1 photo viewer. You'll just have to take my word for it about how good the 3D images look, or try one out for yourself at your local store, as the MPO files can't be viewed in any other way.

Deciding on an appropriate rating for the Fujifilm W1 is also somewhat problematic, as it relies almost entirely on your personal interest in 3D imagery. As a conventional 2D camera, the W1 is merely competent, with noisy images at slow ISO speeds, average operational speeds and a rather restrictive 3x zoom lens. As a 3D device, though, it obviously makes a lot more sense, replacing the need for two cameras and greatly implying the process of recording and making a 3D image, with several advanced in-camera options for further refining the effects that can be achieved. If you've got any interest in stereoscopic photography, then you'll probably have already placed a pre-order for the W1.

Which leaves the rest of us - family snappers, prosumers, even professionals - can the Fujifilm Finepix Real 3D W1 convince us to pay the rather sizeable cost of entry? I'm afraid the jury's still out on that one. While the Fujifilm Finepix Real 3D W1 definitely achieves its 3D ambitions with utterly convincing images, the high price, bulky size and limited 2D capabilities mean that it will probably remain something of a niche product. We're already looking forward to the hopefully smaller and cheaper W2...