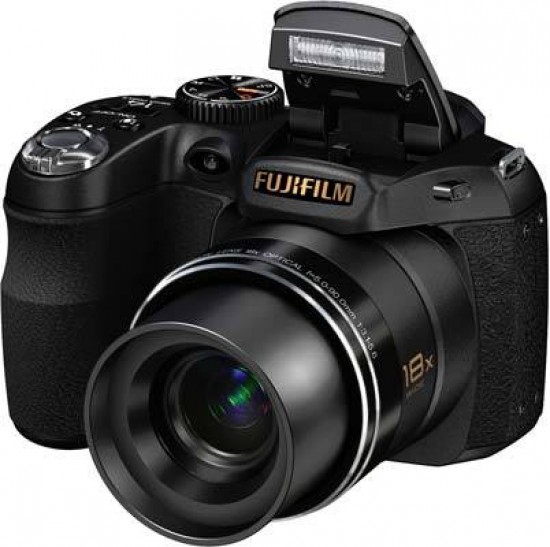 The Fujifilm FinePix S2800HD (also called the S2900HD) is a new super-zoom digital compact camera that looks and feels like a DSLR. Featuring an 18x zoom lens with a 28-504mm focal range, 14 megapixels and a 3 inch LCD screen, the Fujifilm S2800HD offers full manual photographic control for the more experienced user and an Automatic Scene Recognition mode for beginners. The Fujifilm Finepix S2800HD can also shoot 720p HD video and comes complete with a mini HDMI Port for quick and easy connection to a HDTV. Dual Image Stabilization, an electronic viewfinder, ISO up to ISO 1600 at full resolution, high-speed shooting of 3.7 frames per second, Tracking Auto Focus and Panorama Shooting mode complete the S2800HD's main specifications. The Fujifilm FinePix S2800HD retails for £229.99 / $259.95.

If you're launching a new digital camera it seems that as a marketing tool you need a 'world first' attached to differentiate it from the massed ranks of competitors. In the case of the Fujifilm FinePix S2800HD, the latest addition to its 'S' range of big zoom compacts, it is being touted as the 'world's smallest 18x zoom camera'. Perhaps to distract from the fact that it's not a 24x, 28x, 30x or 35x model perhaps. That said a 35mm equivalent of 28-504mm is still a much broader focal range than we'd expect to find on a camera costing just £150 online. And, from a glance at its sophisticated exterior plus specification sheet, that would appear to make this FinePix exceptional value for money.

Design wise it resembles a bridge camera or digital SLR that's been shrunk, but even with lens fully retracted within the stubby lens barrel when in its dormant state (and lens cap attached), the S2800HD is still too much of a squeeze for all but the largest of jacket pockets. The other headline features here are a 14-megapixel resolution, fast becoming the industry norm for whatever size or shape of camera is being launched, plus High Def 720p movie mode (from whence the model number gains its suffix), rather than Full HD. Still, a mini HDMI output port is provided, which is again good for the price point, hidden along with combined AV and USB port under a plastic flap at one side. The full extent of the zoom can be accessed when shooting video, if you don't mind the microphone picking up the buzzing sounds of its adjustments, plus the shot wandering in and out of focus as the camera tries to catch up with whatever the lens is being pointed at. This sluggishness makes shooting video a bit of a let down unfortunately.

Power comes courtesy of four AA batteries that slot into the base of the camera's handgrip, which also features a vacant slot for an SD memory card. With this easily sourced power supply lending the camera added weight when held in the palm, and the sophisticated black finish disguising any plastic in the build, the S2800HD's body construction appears to again transcend the budget status inferred by its inexpensive price tag. Dimensions are 110.2x73.4x81.4mm and weight is a manageable 337g.

The need to find somewhere to fit the AAs also results in a nicely sized grip that is a near match for those offered by entry level DSLRs, and around which three fingers can be comfortably wrapped. There's sufficient spacing between the grip itself and lens barrel to avoid knuckles uncomfortably rubbing up against it. This leaves the forefinger free to hover above the shutter release button - the largest one here, which is in turn encircled by a lever for operating the zoom. Due to the camera's proportions there's not much space at the back for the thumb to rest, so we found ours tended to slip across the adjacent buttons for swapping between EVF and fixed 3-inch LCD, and reviewing images. Fortunately then, each requires a definite and direct press to activate it.

Enabling a greater likelihood of sharper results when shooting at the telephoto end of the zoom, the Fujifilm's 1/2.3-inch CCD sensor is mechanically stabilized and this 'belt' is backed up with the braces of high-ish ISO sensitivity settings, here ranging from ISO64 up to ISO6400, though it isn't immediately obvious how to manually access such options when tabbing through the S2800HD's menu screens, as some features are located with a press of the 'F' (for 'Foto') mode button instead. Unhelpfully only a cursory 'basic' guide is provided out of the box, with the expanded manual proper accessed on CD only. Also, it's worth noting that at ISO3200 and above, resolution drops to three megapixels to limit the appearance of image noise if you are shooting in low light without flash.

From the front then, this compact super zoom's lens unsurprisingly dominates, lits barrel jutting out a good centimetre beyond the handgrip. Switch the camera on and the retracted lens immediately extends a further half centimetre to arrive at its maximum wide angle setting awaiting a full squeeze of the shutter release button to take a shot. Above the lens sits a hood housing the S2800HD's pop up flash, manually activated to the sound of a dampened clunk courtesy of a dedicated button inset at the top right hand edge of the face plate.

The camera's flash settings can't be accessed without the flash first being manually raised - it won't automatically pop up. Flash modes in auto mode are limited to auto flash and forced flash - with the 'off' option taken by merely lowering the raised flash. Switch to Program or one of its other creative settings via the top-mounted shooting mode dial (which also offers shutter priority, aperture priority and manual settings) and Slow Synchro mode is further selectable. The camera automatically detects and if necessary removes red eye, so this isn't given as a dedicated flash option. The dial itself is also large and chunky and features Fujifilm's intelligent auto or 'SR Auto' (Scene Recognition Auto) mode for pure point and shoot functionality. We found the dial a little too easy to jog from one setting to another however, and on occasion found ourselves set up to shoot a panorama - another option here that's surprisingly effective if you line up the little crosses which guide the way correctly, which feels a bit like playing a computer game.

Apart from the aforementioned pop up flash - here in the expected absence of any vacant hotshoe - the top plate features the usual shutter release button surrounded by a chunky lever for operating the zoom as mentioned, plus dedicated button for activating/deactivating face detection/recognition and a second identically sized button for swapping drive modes between single and continuous capture. Set just behind this is another chunky control: a slider switch for powering the camera up or down. Give this a flick and the camera powers up in a couple of seconds, lens modestly extending to maximum wideangle setting, accompanied by an audible mechanical whirr as it does so. The rear monitor screen also bursts into life at the same time.

If using the 3-inch, 230k-dot resolution LCD as a viewfinder indoors, the display is noticeably noisy, making it difficult to tell whether the camera has reliably determined focus and exposure. Therefore it becomes as much a case of point and hope as point and shoot when it comes to taking interior shots. There's the option of swapping over and using the smaller EVF just above of course, but its tiny size and equally low resolution (200k dots) unfortunately only makes the situation worse. Outdoors we found ourselves relying more on the larger screen too, the EVF being so small it's easily overlooked.

A half press of the shutter release button and there's a moment's pause while focus and exposure are determined, AF point highlighted on screen accompanied by a bird-like chirp of confirmation that an image is ready to be captured. Go ahead and take the shot and a maximum quality image is committed to memory - here removable SD/SDHC card, or meager 23MB internal capacity - in around two seconds, screen briefly blanking out then freezing to reveal the captured shot. Again, as with the power-up timing, this is pretty average for any digital compact, so we've no issue here.

Although the back plate buttons are in general terms well structured and logically laid out, we did find our thumb accidentally pressing the EVF/LCD switchover control when hefting the camera out of a pocket or bag as, as we noted at the outset, it's located just where the pad of your thumb would intuitively rest as your forefingers snake round the grip.

With the regular 4:3 ratio LCD taking up most of the backplate real estate, the largest button here is actually the self-explanatory menu/set control, sitting dead centre of a four-way rocker control. Ranged around this are various means of adjusting LCD brightness on the fly, deleting duff images, selecting from the modest flash options (providing the flash has of course been raised), and switching from infinity to macro or super macro close ups.

Whilst the above is pretty much standard, Fujifilm has also of course provided its regular 'F' (for Foto) mode button on the S2800HD, sitting above the multi function pad and alongside a dedicated playback button. This 'F' mode, as regular FinePix users will be aware, pares down and groups together arguably the most essential shooting options in a single-screen menu.

Here we are presented with the chance to adjust ISO light sensitivity from ISO64 up to ISO6400, albeit with a resolution drop at ISO3200 and above, along with image size, image quality, plus to select if wished from Fujifilm's alternative colour options of a contemporary 'chrome' finish or more regular black and white; these being applied at the point of capture. Dedicated display and exposure compensation buttons - the former turning on or off all screen info, or adding a nine zone compositional overlaid grid - complete the picture, as does the implementation of a live histogram, another unusual feature at the camera's value added price point.

We don't mind the fact that the battery compartment is shared with the one for the optional media card, except when we're using a tripod and attempting to retrieve said card, but it's slightly irritating that you're forced to cup a hand around the batteries to stop them falling or sliding out too every time you do so.

Nature of the beast when it comes to using AAs of course, as by contrast pretty much all lithium ion cells are held in place internally with a clip. It's reasonably impressive that up to 300 shots can be gained from a set of standard alkaline AAs however, which is in fact better than a lot of rechargeable alternatives manage in certain digicams. Having said that we managed roughly half of that before we were getting a red 'low battery' indicator on screen, though we were putting the compact through its paces in other areas.

Of course, ultimately whether the S2800HD is worth parting with your pennies with comes down to picture quality - or should. So how does the Fujifilm fare in this area? Are its pics indeed 'Fine', or by contrast flat and dull in the final analysis?