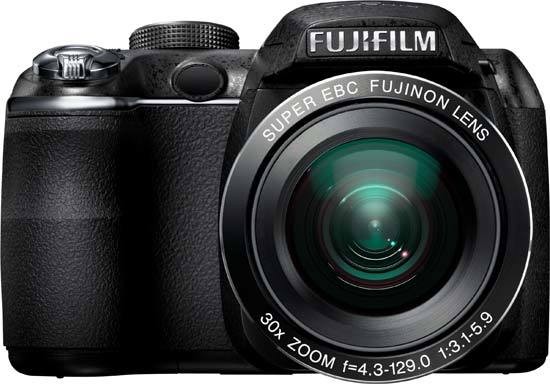 From the minds of Fujifilm comes the FinePix S4000, a chunky DSLR-style compact digital camera aimed at the type of user that is venturing timidly into superzoom territory but still likes the familiarity of a standard compact. Featuring a 14 megapixel CCD sensor, 720p HD video, what the company calls Full HD photo, a 3 inch LCD screen and an eye popping 30x optical zoom, the S4000 certainly looks the part and, with a relatively low price point of $279.95 / £299.99, should attract admiring glances from a wider crowd.

Fujifilm have moved on a lot in the years they've been producing digital cameras. They started on their innovation path with the Super CCD which would interpolate the pixels on the sensor to double the output. It can be argued that they pioneered the function key on a camera because of the "f" button however function buttons were present on Canon Powershot models slightly earlier. One area that Fujifilm proved their salt was in the menu system which was - and still is - extremely easy to use.

Back to the present and the finepix (f) button on the S4000 has a more simple approach than seen on the previous cameras. All that's shown is the ISO, image size and colour modes (colour, chrome and black & white). A rather unusual collection of options to place in one menu and the finepix button takes up a portion of the right shoulder next to the command dial. In front of this is the power switch which is a spring loaded slider. On top of the DSLR style grip are the face detection and burst buttons. The zoom is a twisting type that sits around the shutter release and it's a shame that Fujifilm haven't incorporated the zoom ring in the same way that they've done on some other of these DSLR design superzooms.

The command dial is strangely bereft of options with only 10 in place. As well as the manual PASM modes, there's a custom mode, auto, SR (Scene Recognition) auto, SP (Scene Position) which are basically the different pre-set scene modes, a panorama and video mode as well as a custom manual mode.

Arguably, the biggest feature of the Fujifilm FinePix S4000 is the 30x optical zoom which covers an eye watering focal range of  24 - 270mm in 35mm terms. It's great for photographing ships on horizons, closing in on wildlife and if room permits it adds compression to portraits.

To help with keeping your images sharp at high telephoto, the Fujifilm FinePix S4000 has two types of image stabilisation. A high sensitivity value of ISO6400 allows faster shutter speeds which couples with the sensor shift to keep your pictures steady. It's a shame that the zoom ring of the HS series of Fujifilm cameras hasn't been used on the S4000. Although it has 45 steps in the zoom range, it's still no substitute for the manual control of a zoom ring. However, it does mean that photographers moving up from smaller compacts have something familiar to use.

Fujifilm have improved on the standard panoramic mode that's found on most cameras these days. Typically, three photos are taken using a portion of the previous picture at half opacity to frame and align the next shot with. On the S4000 there's a much simpler way of doing things. After taking the first picture, a small yellow cross appears at the right side of the frame with a white circle that has a cross cut out in the centre. Aligning the two means the picture is framed perfectly for the next shot and to make sure it's done as soon as the cross fits into the cross shaped hole perfectly, the camera will automatically take a picture.

The Fujifilm FinePix S4000 is styled like a DSLR, but is it built like one? Well, the casing is primarily plastic with leatherette trim in places where you will hold it. The command dial is large and easy to get hold of but it's slack and easily moved into place. While that's great with quickly getting it from one mode to another, there's always the chance of it getting knocked while reaching for something else.

The bottom of the camera shows two of the biggest surprises. The first is a plastic tripod bush which - on a budget camera - isn't that much of a surprise but on a camera that has such a large zoom, the tripod is going to be an overworked accessory. For that reason, the tripod bush becomes a high traffic area and a plastic one won't last as long as a metal one. The other area is in the battery compartment. The S4000 takes 4x AA batteries which isn't the surprise. What made us lift our eyebrows was the lack of SDXC compatibility. It's a brand new format that's on everyone's lips and new consumers are going to want all the latest technology. It's agreed that a maximum 16Gb capacity will be more than ample for the average user so maybe SDXC isn't all that necessary after all?

It appears after looking over the camera that despite the shape making it look as though it's a proper bridge camera that a keen photographer would use instead of taking a DSLR kit, it's actually more geared to a beginner that fancies a big zoom on their camera. If you're the former it would be better to look at the HS20 EXR model. However, the S4000 is a nicely equipped camera for the market it's aimed at. The large zoom will tempt many while the easy to use functions will set racing minds at ease. We like the easy to hold design, the chunky grip feels good but the fake leatherette covering is a bit slippy. However, we were confident while holding it one handed.

The finepix button has been around for around 7 years now and what Fuji have is a widely recognised button simply because of its heritage. However, instead of working it, they've dropped off the amount of functions that it holds to just three on the S4000. It would be good to see it used more as a function button maybe putting more commonly used features in there such as white-balance, resolution (image size is already in there), metering and AF.

Looking at the pictures we took on the back of the camera, they look crisp and well exposed. The functions in playback take a while to get started, for example when the playback button is pressed, it's not possible to zoom into the picture for around 5 seconds after the picture has been displayed. Not good if you're in a rush, but then the shutter lag is such that it's not possible to be in a hurry using the S4000 anyway. Not that it's super slow, it's around the same as any other compact but maybe it's because it looks like a DSLR, we expect it to work like one.

In the box is a set of 4x AA batteries, driver software and quick start guide to get you shooting straight away. The full manual is on the disc that comes with the camera. Because the batteries aren't rechargeable, there's no charger with the camera. There's also a strap to prevent you from dropping the camera and a lens cap to cover the lens when the camera's not in use.