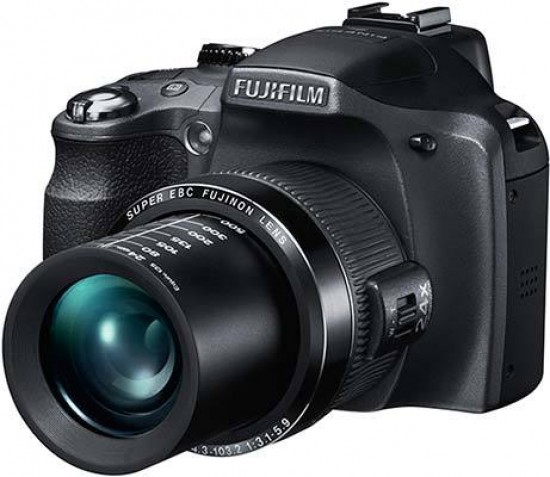 All of the sample images in this review were taken using the 14 megapixe Finel JPEG setting, which gives an average image size of around 6Mb.

The ISO range on the Fujifilm FinePix SL240 starts at ISO 64 and goes all the way up to ISO 6400. The lower settings provide lovely images, but the lens isn't very bright and needs lots of light to use that setting. Either that or a tripod and very still subject. If you have those, then the image quality is superb. Very sharp lines, no noise at all in any areas of the image are what await you at this setting.

If we were to be hyper-critical, there's a fraction of noise creeping in at ISO 100 which is both disappointing and unusual given that it's only a third of a stop difference between the two. We view these images at full magnification and normal viewing won't pick this up and, as we said, we are being very critical. Again at normal viewing distances, you won't see the noise creeping in, but ISO 200 sees a slight addition of salt and pepper noise to the darker areas of the picture. By ISO 400, colour noise is taking over with blobs of it now noticeable. Edge definition is also starting to decrease and this continues steadily through the next stage; ISO 800.

ISO 800 sees a slight cast appear all over the image which gets worse at ISO 1600. This fixes at ISO 3200 because Fujifilm have reduced the number of pixels to 3 million. By doing this, the pixels are more spaced apart and therefore suffer less from heat noise caused by neighbouring pixels. However, the downside is a lower amount of detail in the picture. The same problems start to creep back as the ISO is put up to 6400.

The focal length of the Fujifilm FinePix SL240 is 4.3 - 103.2mm or 24 - 576mm in 35mm terms. The 24mm wide-angle setting is great for getting those sweeping vistas in while the long zoom will ensure you rarely have to walk to the subject you want to take a picture of. Wide-angle does tend to suffer from barrel distortion and we did pick up traces of pincushion at full zoom too.

The Fujifilm FinePix SL240 has in-built sharpening which can be found in the Main menu on the second page. There are three options to choose from (Hard, Normal and Soft) and they do make a difference. Using the Hard setting gives roughly the same result as using sharpening in Adobe Photoshop. The camera defaults to the Normal setting, but it doesn't reset when the camera is switched off.

The Fujifilm FinePix SL240 has 2 different image quality settings available, with Fine being the highest quality option. Here are some 100% crops which show the quality of the various options.

We noticed evidence of chromatic aberration on various pictures. The time we had to test the Fujifilm FinePix SL240 was dull and grey. Chroma is usually more noticeable on high contrast areas and on the few pictures we got it, it was worse at the edges of the frame; as we'd expect.

There are two macro features of the Fujifilm FinePix SL240. The first is a standard macro and has a close focusing of 7cm. That's respectable enough without being the best available. However, you can switch to Supermacro if you need to get closer. Supermacro allows you to get in as close as 2cm.

The flash on the Fujifilm FinePix SL240 is a pop-up type. It flops over the lens when not in use. To flip it up, press the button on the left of the camera and it will activate. There's a slight amount of vignetting without flash, but it's very soft. Using flash makes it worse but it disappears when the camera is fully zoomed out whether the flash is on or off.

External flash can be used but to get full compatibility with the camera, a dedicated Fujifilm flash has to be used (not necessarily Fujifilm made, but dedicated). It is possible to use a non-dedicated flash although Fujifilm may not support a repair under warranty if a fault occurs due to you using it. Not that it would cause a problem, but you never know. Non-dedicated flash can be bought for around £85 while a Fujifilm flash is roughly double that for a good one.

The raised flash of both types means that red-eye isn't a problem and we didn't get any. There is a red-eye removal system on the camera in the remote occasion that you do get it.

Our night test shots were surprising. It's rare get such good results from the Program/Auto mode while getting the opposite in Night scene by comparison. The white-balance can be balanced to a custom setting which is great. Saying that, in our test shot, the street lights were casting a strong yellow light, but we measured from the snow and the Fujifilm FinePix SL240 has balanced that brilliantly.

In Night mode, the camera will choose the ISO for you. However, if you're steadying it on a tripod or wall etc, then turn off the image stabiliser and use the Night (Tripod) mode. This allows the camera to use a lower ISO and a longer shutter speed. In our test shot, the camera selected ISO 200 to get a 0.5sec exposure. In manual, we managed a 2.5sec exposure at ISO 64 because in Program the ISO can be manipulated.