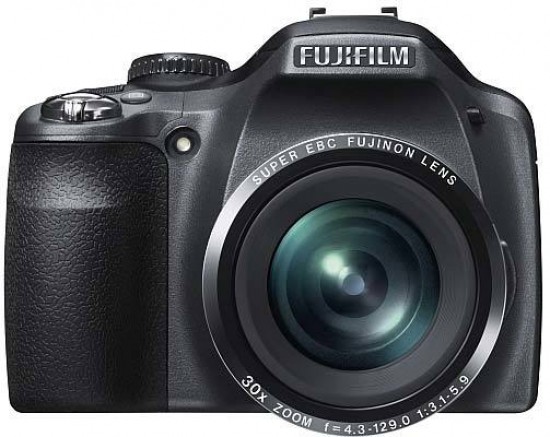 The Fujifilm FinePix SL300 is a chunky DSLR-style compact digital camera aimed at the type of user that is venturing timidly into superzoom territory but still likes the familiarity of a standard compact. The SL300 features a 14 megapixel CCD sensor with sensor-shift image stabilisation, a massive 30x optical zoom with a focal range of 24-720mm, 720p HD video at 30fps, a 3 inch 460k dot LCD screen, faster start-up, improved auto-focus speed and an upgraded response time. Priced at $299.99 / £279.95, the new Fujifilm FinePix SL300 is available in black.

The Fujifilm FinePix SL300 is styled like a DSLR camera, but is it built like one? Well, the casing is primarily plastic with leatherette trim in places where you will hold it. The Shooting Mode dial is large and easy to get hold of and it has a positive clicking action that prevents it from being moved out of place.

It appears after looking over the camera that despite the shape making it look as though it's a proper bridge camera that a keen photographer would use instead of a DSLR kit, the SL300 is actually more geared to a beginner that fancies a big zoom on their compact camera. If you're the former it would be better to look at the HS30EXR model which has a number of photographer friendly features such as RAW support and physical zoom and focus rings.

However, the SL300 is still a nicely equipped camera for the market it's aimed at. The large zoom will tempt many upgraders while the easy to use functions will set their minds at ease. We like the easy to hold design, the chunky grip feels good but the fake leatherette covering is a bit slippy. However, the camera is light enough for us to feel confident to hold it one handed. We also like the additional zoom lever on the side of the lens barrel which can be easily adjusted with your left thumb - an unusual but thoughtful touch.

The external flash hotshoe on top of the SL300 allows a more powerful optional flashgun to be fitted, like the EF-20, to complement the built-in flash, although we'd bet that most SL300 users will be satisfied with the latter as it offers a reach of up to 7m.

The Finepix (F) button on the SL300 has a more simple approach than seen on previous Fujifilm cameras. All that's shown is the ISO, image size and colour modes (colour, chrome and black & white). It's a rather unusual and limited collection of options to place in one menu and the Finepix button takes up a portion of the right shoulder next to the command dial. It would be good to see it used more as a function button maybe putting more commonly used features in there such as white-balance, resolution (image size is already in there), metering and AF.

In front of this is the power switch which is a spring loaded slider, rather than a more conventional switch or button, and in practice we found it a little sticky and unresponsive. On top of the deep DSLR-style grip are the auto-focus area and burst shooting buttons. The zoom is a twisting type that sits around the shutter release and it's a shame that Fujifilm haven't incorporated the zoom ring in the same way that they've done on some other of their higher-end superzooms.

The Shooting Mode dial is a little bereft of options with only 10 in place. As well as the manual PASM modes, there's a Custom mode, Auto, SR (Scene Recognition) Auto, SP (Scene Position) which are basically the different pre-set scene modes, and a Panorama and Video mode.

The literally biggest feature of the Fujifilm FinePix SL300 is the 30x optical zoom which covers an eye watering focal range of  24-720mm in 35mm terms. It's great for photographing ships on horizons, closing in on wildlife and if room permits it adds compression to portraits.

To help with keeping your images sharp at the longer telephotos settings , the Fujifilm FinePix SL300 has two types of image stabilisation. A high sensitivity value of ISO 6400 allows faster shutter speeds which work in tandem with the sensor shift image stabilisation system to help keep your pictures steady. It's a shame that the manual zoom ring of the HS-series of Fujifilm cameras hasn't made its way onto the SL300. Although there are 45 incremental steps in the zoom range, it's still no substitute for the manual control of a zoom ring. However, it does mean that photographers moving up from smaller compacts have a familiar zoom switch to use.

Fujifilm have improved on the standard panoramic mode that's found on most cameras these days. Typically, three photos are taken using a portion of the previous picture at half opacity to frame and align the next shot with. On the SL300 there's a much simpler way of doing things. After taking the first picture, a small yellow cross appears at the right side of the frame with a white circle that has a cross cut out in the centre. Aligning the two means the picture is framed perfectly for the next shot and to make sure it's done as soon as the cross fits into the cross shaped hole perfectly, the camera will automatically take a picture.

Looking at the pictures we took on the back of the SL300, they look crisp and well exposed thanks to the large and high-resolution 3 inch LCD screen. Complementing the LCD is an electronic viewfinder, allowing you to hold the camera up to eye level to compose a picture, which definitely helps when using the extreme telephoto focal lengths. The EVF is pretty small though and only has a resolution of 200K dots, so it's not the best example that you'll ever use. A diopter adjustment allows for fine-tuning of the magnification level.

The functions in playback take a while to get started, for example when the playback button is pressed, it's not possible to zoom into the picture for around 5 seconds after the picture has been displayed. Not good if you're in a rush, but then the shutter lag is such that it's not possible to be in a hurry using the SL300 anyway. Not that it's super slow, it's around the same as any other compact but maybe it's because it looks like a DSLR, we expected it to work more like one. Thankfully the startup time of a shade under 2 seconds is a lot more like it, as is the snappy auto-focus system, although the latter does tend to hunt around and even miss focus completely in poorer lighting conditions.

On the bottom of the SL300 is is a plastic tripod bush which - on a budget camera - isn't that much of a surprise but on a camera that has such a large zoom, the tripod is going to be an overworked accessory. For that reason, the tripod bush becomes a high traffic area and a plastic one won't last nearly as long as a metal one. The other area is in the battery compartment. The SL300 takes a lithium-ion battery rather than the 4x AA batteries that most Fujifilm bridge cameras take. This provides a respectable battery life of around 300 shots, but you do lose the flexibility of being able to easily source AA batteries in an emergency.

Over on the right-hand side is a mini HDMI output port that enables the SL300 to be quickly connected to an HD ready TV, though as usual there's no cable supplied. In the box is the lithium-ion battery, battery charger, driver software and quick start guide to get you shooting straight away. The full manual is on the disc that comes with the camera. There's also a strap to prevent you from dropping the camera and a lens cap to cover the lens when the camera's not in use.