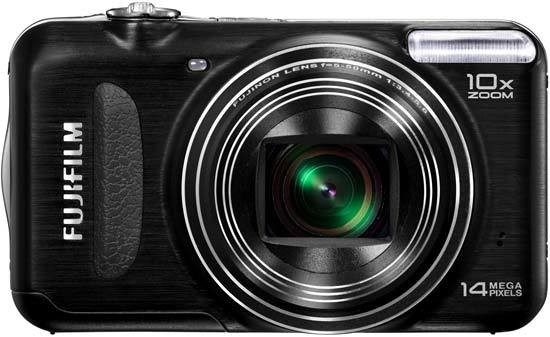 Fujifilm have introduced the new T series to their range of cameras. Designed to be slim and sexy but with a host of features bristling under the casing, the Fujifilm Finepix T200 sports a 14 megapixel CCD, 10x optical zoom, HD video, scene recognition as well as some of the newer functions from the top end cameras such as photobook assist, upload marker for Facebook or YouTube and the easy panorama shooting system. Aimed to appeal to the holiday maker with a family that want a good quality camera without the price and also require a long zoom without the bulk. The Fujifilm Finepix T200 is available in black, silver, blue and red for £150 / $180.

Being a more curvy model, the T200 certainly looks different. On the front, the large lens barrel takes up most of the space and with it being so imposing it's hard to notice either the slim flash or the leatherette grip. The casing sweeps out to the lens giving the camera an attractive design and the curves continue through to the back where the layout – although standard – is nice with all the controls at your fingertips. There are three small rubber grips to place your thumb when it's not rotating the command dial or pressing a button. It would've been ultra cool to have them light up when the camera turns on but it's not detrimental to the design.

The command dial takes up a lot of the camera, in fact we're surprised that Fuji have used such a large dial and knocked the screen down to a 2.7 inch type. Especially with more cameras using a 3 inch screen, bigger is certainly better these days. The dial has 8 options for video, two dedicated scene modes which are programmable to your favourite scene, the natural and natural with flash options followed by the more logical auto, scene recognition auto and program. We use the word logical because we wonder about the need for the natural and natural with flash modes needing a dedicated option on the command dial. They could just as easily be put in the menu system allowing for two  more widely used commands or to make the dial smaller.

Most interesting on the T200 is the lack of the popular F button. It's been on the Fujifilm digital compact cameras for around 7 years now and this is the first camera we've seen that doesn't have it on. The FinePix colour option is still present, it's now found in the main menu which is, and always has been, very easy to use. However, there are only two tabs for shooting and set-up and the set-up menu has four long pages of options. A third option for camera controls, maybe, which would shift the image display, frame number, 4 volume controls, 2 LCD controls, background colour, date & time, language and reset into a separate area of three pages leaving the set-up menu with two. Much more manageable and it's not as disheartening when you need to change something and have to find it in the menu.

Fujifilm say that the T200 has stolen features from the top end models to use on the new T series.  We like the image marker system for uploading to popular websites such as Facebook and YouTube. It will certainly interest social networkers and the young, tech-savvy. We can imagine parkour runners using this camera to zoom in on the action and then mark it for uploading it onto YouTube. In fact, it's a shame that the Fujifilm couldn't be Eye-fi compatible because that would be a massive bonus for that crowd.

Four of the major features that are being trumpeted are the photobook assist, motion panorama, face recognition and HD video. Face recognition is an evolution of face detection so don't get them mixed up. It works by programming the camera what someone looks like, for example your best friend, by taking a picture of them. You can even add a name. Then whenever that friend is in the shot, face recognition will see them and prioritise that face over all others. You can also search through pictures on your memory card by name.

Motion panorama is actually a very good system. After Sony released sweep panorama, taking panoramic pictures by aligning three pictures using an opaque template of the previous shot seemed tedious, long winded and above all, it didn't work as well. The way that the Fuji creates panoramas is by using a marker system. After taking the first picture, a cross appears at the right side of the frame with a cut-out cross on the left side. As you sweep, the cross on the right moves over to the left and as soon as you align the two, the camera automatically takes a picture. When you've taken all three, it will stitch them together. Not as easy as the Sony, but a hell of a lot easier than the older versions still favoured by other manufacturers.

One of the interesting things on the T200 is the photobook assist mode. The idea is that if you want to create a photobook, you can arrange your pictures in camera including the cover and the camera will show you on the screen what the book will look like. As a handy tip, if you have a lot of pictures on the card, don't simply select all thinking that you'll save time because the processing takes what seems like forever. In actual fact it's a few minutes but the camera is frozen while it's performing the operation.

Face recognition has been around for a few years now and is a progression from face detection that Fujifilm pioneered. It allows you to store the faces of friends and family that you want to pick out of a crowd. Then let's say you're taking a picture of your friends in a crowded bar or at a busy tourist spot on holiday, the camera will detect all faces but once it recognises your friends, it will prioritise them in the frame and ignore other faces in the frame.

The Fujifilm FinePix T200 is beautifully sculpted to the point that it looks like a camera that would be around £200 - £300. However, it's priced at the £130 mark and that needs to be taken into consideration when looking at the features. You see, they're not that special. There's nothing new and what it does have isn't particularly compelling. However, for the price, the zoom, design and build quality are very good. We think that there are a lot of features that will appeal to the younger crowd such as the face recognition, Facebook and YouTube upload and the easy panorama stitch. Not to mention the sexy design and nice low price.

In the box is a lithium ion battery and charger, driver software and quick start guide to get you shooting straight away. The full manual is on the disc that comes with the camera. There's also a wrist strap to prevent you from dropping the camera.