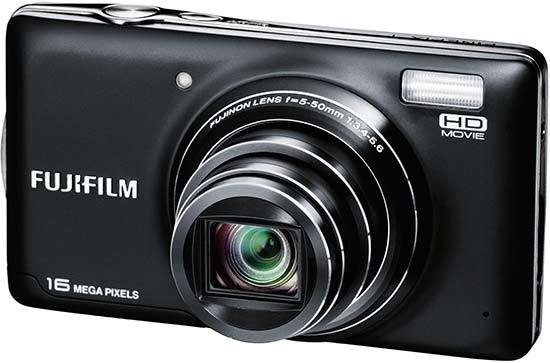 The Fujifilm FinePix T400 is an affordable long zoom digital compact camera. Alongside the 10x optical zoom, it sports a 16 megapixel sensor, 28mm wide-angle lens, 3 inch LCD screen, 720p HD video and easy upload to social networking sites. The slim, sexy body coupled with the long zoom looks appetising, especially to travellers. Does that mean that the rest of the feature-set has been compromised? In our Fujifilm FinePix T400 review, we'll try to find out. Officially riced at £119.99 / $149.99 but available for around £70 / $90, the T400 comes in purple, blue, black or pink.

Usually when a digital compact camera comes our way sporting a long zoom lens, we find that the front of the camera is a bit of fascia and a lot of lens barrel. Not so with the Fujifilm FinePix T400. Fujifilm seem to have managed to keep a long zoom available on a slim body without the need for a wider barrel for more telescopic sections. What you're left with is a pretty normal looking camera, really. That's not to say it's unpleasant. The shape and curves that flow around the bulging lens are modern and attractive to look at. Of course, because of the thin body, the lens has to stick out slightly but that's to be expected. The top of the camera has just the power button and shutter release with all other controls on the back of the camera. Even the zoom has been relegated to the rear - normally appearing as a ring wrapped around the shutter release.

Because of the diminutive size of the Fujifilm FinePix T400, the screen takes up a lot more real estate than you'd normally see. The small buttons are squashed over to the right side to accommodate the screen. Aside from the added zoom buttons, the back sports only three other buttons around the main command pad. The options on the buttons are the typical variety; above the command pad, you'll find the Playback button to take a look at pictures you've already taken. At the bottom, there's a button to switch through the display preferences and one with a red dot on which is the direct video record. As well as helping you navigate your way around the menu system, the navigation pad doubles up to allow fast access to your most used features such as macro, self-timer, flash and exposure compensation.

The 10x zoom lens starts at a wide-angle 28mm. Wide-angle lenses are very popular due to people wanting to photograph landscapes and sweeping vistas. The downside is that the 10x zoom lens doesn't have as much reach at the top end. Although 280mm is impressive for such a tiny camera, starting the lens at a focal length typical of 35mm compact cameras and you'd get an extra 70mm at the top end. That can be a big difference.

The Fujifilm FinePix T400's body comprises of a plastic exterior with a piece of metal circling the circumference of the camera. On the bottom the plastic tripod bush sits next to an exposed USB port. The memory card (not supplied) sits in the battery compartment next to the lithium ion battery (supplied). Interestingly, the camera has no internal memory. In the past, cameras with no internal memory came with a memory card to get you started. It was assumed that it was some kind of legal requirement to allow immediate play. It just goes to show that it was simply the manufacturers being nice. We're not trying to imply that Fujifilm aren't being nice, but back when they were supplied, a memory card was an expensive accessory. These days, they're a lot more accessible and it will keep the costs down, both on additional internal memory and adding thousands of SD cards to camera boxes.

The screen is lovely and bright with the buttons responding nicely to our commands. They're firm but not difficult. Entering the menu systems, some Fujifilm cameras have an “F” button for the FinePix menu. This isn't present on the T400 and it's not entirely clear why that is. The Main menu is accessed by pressing the menu button in the centre of the command pad. It does everything it needs to do, accessing all the main and core functions. The menu is laid out into two sections: Shooting and Set-up. The Shooting menu is for the day to day modes and features that they can't put on a button. For example in this menu, you can adjust the resolution, ISO, white-balance, continuous shooting or video modes.

The Fujifilm FinePix T400 comes with face detection installed so that the camera will automatically know when a person is in the frame. It does this by locating the triangular formation of eyes and mouth. It then prioritises them for focus and metering. If you've registered (up to) 8 people in the face recognition banks, the camera will also be able to locate friends in a crowd of people and prioritise them over everyone else. It will also bring up their name on screen. Another couple of extra aids when shooting portraits is Blink warning and Smile & Shoot mode. Blink warning will let you know if someone has blinked in the image. You can then retake, save or delete the original, examine it and enlarge the face to check. Smile & Shoot mode will detect when someone ion the frame is smiling and will automatically take a picture without the need to press the shutter release. This is to try and obviate reflex lag and have more of a chance of getting the right shot.

But then, it's not just a smile shutter that's going to get the shot. The camera has to be fast at taking pictures, focusing, metering and taking rapid pictures in succession. Shooting from a cold start is a tricky one. Simply pressing the power button and holding the shutter down until it takes a picture doesn't curry any favours in the Fujifilm camp. To get the best response, the trick is to wait until the writing appears on the screen. If you're fast enough, like we are, you can get a standard result of around 2.5sec. We always test our shutter lag pre-focused as without pre-focus isn't just shutter lag, it's also focus speed. Happily, the lag on the T400 is the same as any other digital compact camera recording times of 0.08sec. The T400 only has one continuous shooting mode called Top 3. It simply takes three pictures in a row and stores them to the card. It's slow, in fact the three pictures were taken in just over 2 seconds. Sadly, the camera took up to 11 seconds to record those three pictures onto the memory card.

You can access the pictures you've already taken by pressing the Playback button on the back of the camera. This can be done whether the camera is on or off, but if it's off, you have to hold the button down for a few seconds. Pictures are displayed full screen with basic shooting information on such as ISO, resolution, battery status, date, time, aperture and shutter speed. The Playback menu has it's own section which replaces the Shooting section - the set-up menu remains the same. Because the Playback is all about after the picture is taken, there are a few features such as Photobook assist, red-eye removal, crop, resize and protect. If you use the face recognition, you can search for images based on information you feed it and you can also erase all face recognition information. A particularly unusual option to provide.

If you want to look at more than one picture at once, zooming out will show the pictures in a sort of “Windows Aero” style while zooming out again gives them a cascade effect. Once more and you get the thumbnails that everyone expects.

In the box along with the Fujifilm FinePix T400, you get a lithium-ion battery with charger, wrist strap and USB cable. There's also a basic manual to get you started. The full manual is on the enclosed CD which also has the FinePix Studio version 3.2.