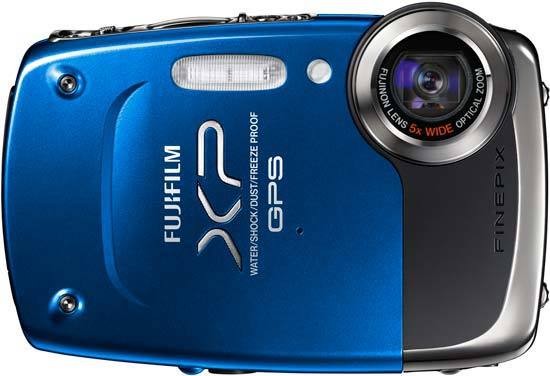 All of the sample images in this Review were taken using the 14 megapixel JPEG setting, which gives an average image size of around 6Mb.

The XP30's lens is a standard Fujinon zoom lens which are actually quite good. Fujfilm have been making cameras and lenses for decades (one of our first film SLRs was a Fujica ST801 from the 1970s) so they have an indication of how to make them. There is some lens distortion at the wide-angle setting which we found is exacerbated when photographing up buildings towards the sky.

At low ISO or in controlled lighting, the Fujfilm FinePix XP30 provides very good picture quality. Primary colours are recorded realistically with yellows coming out nice and bright even in dull weather. Red and green also recorded nicely.  The most surprising colour result was from purple. It can be a challenge for sensors but the FinePix XP30 CCD coped admirably. It also did well with subtle colours and contrasting blacks and whites had no issue for the sensor.

On the whole, the metering works well. We had some issues with the subject under exposing when the sky was predominantly in the frame or when the sun was in the background but that's to be expected and for a small compact, the XP30 managed nicely.

There's a good amount of detail in the pictures which is pleasing but this can quickly dissipate when the ISO is raised. We had severe problems with noise when we started getting to around ISO 400 and above, which isn't too bad for a digital compact camera with a small sensor. Noise is present at lower settings, but it's possible to cope with it.

The Fujifilm FinePix XP30 has a sensitivity range of ISO100-3200. Looking at the pictures normal size on a computer screen or printing them out to a standard album size of either 6x4 or 7x5, you won't notice the loss of image detail due to the noise that creeps in even at ISO100. Noise control is working on the colour artifacts but it can't cope with the salt and pepper noise which is noticeable in the dark areas. The levels stay around the same at ISO200 showing that the noise reduction system on the camera is still working ok. Move up to ISO400 and the noise reduction starts going into over-drive as the detail starts to smooth out massively. From then on, colour invasion gets too much for the camera and it comes in aggressively. ISO3200 loses nearly all detail all over the picture.

There are 5 ISO settings available on the Fujifilm FinePix XP30. Here are some 100% crops which show the noise levels for each ISO setting:

The Fujifilm FinePix XP30's 5x zoom lens provides a focal length of 28-140mm in 35mm terms, as demonstrated below.

The pictures straight from camera come out a little bit soft and certainly benefit from the standard sharpening in an editing tool. We used Adobe Photoshop CS4 for the test and it sharpened the picture sufficiently without the need for fine tuning using the unsharp mask.

At full resolution on the fine setting, a typical image from the XP30 is around 5.3Mb while simply knocking it down to the normal setting drops the file size down to less than 3Mb.

The Fujifilm FinePix XP30 handled chromatic aberrations well during the review. Some purple fringing was present around the edges of objects in high-contrast situations, as shown in the example below.

The specification sheet for the XP30 states that the camera has a macro close focusing facility that can get as close as 9cm from the subject. This isn't entirely accurate because we were shooting much closer. A great result for a little digital compact camera. The first image shows how close you can get to the subject in Macro mode (in this case a compact flash card). The second image is a 100% crop.

There are four flash modes on the Fujfilm FinePix XP30 digital compact camera. As well as the auto mode, there's also two flash over rides to constantly fire it regardless of the light conditions and to switch it off even if it's really dark. Over-riding to forced flash is good for backlit subjects who may otherwise be silhouetted. There's also a slow synchro flash which will fire the flash to light a subject in the foreground then use a slow shutter speed to illuminate the background. A steady tripod or perch is necessary for this setting. At wide-angle, there's a very mild amount of vignetting where the image is dark. At telephoto vignetting all but disappears but the spread of light is even enough.

To get the best possible quality from the camera, it has to be used in program mode so that the ISO can be adjusted. Herein lies the problem, though because the slowest shutter speed is 1/4sec. For a long exposure night time shot, the picture comes out horribly under exposed. To compensate, it's possible to use the night shot with tripod setting that can go as slow as 4 seconds but you can't control the ISO.