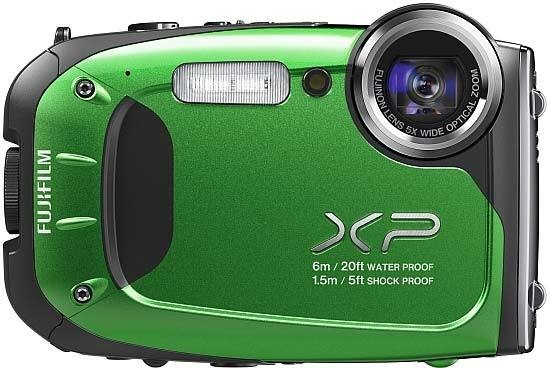 The Fujifilm FinePix XP60 is a small and slim digital compact camera. As well as a line-up of popular features such as a 16 megapixel CMOS sensor, Full HD video, SDXC card compatibility and anti-reflective screen, the XP60 is waterproof, shock-proof, dust-proof and freeze-proof. This makes it one tough cookie. Will it survive our rigorous test and come out smelling of roses? The Fujifilm FinePix XP60 costs around £179 / $199 and is available in blue, red, black, yellow and green.

Upon opening the box, you're faced with the basic user guide for the Fujifilm FinePix XP60 which is a fold-out guide with cartoon images showing you how to load the battery and fit the wrist strap. There's also a safety handbook informing you about the water resistance of the camera and essentially advising you not to lose it down the Mariana Trench. Along with this paperwork, the camera is supplied with a CD which holds the full manual in a variety of languages and FinePix Studio viewing software version 2.4.

Scrabble beneath these and you get to the rest of the stuff included in the box. Aside from the camera, there's a wrist strap, charging plug and USB cable. The cable acts as a means to get pictures onto your computer and as a charging cable. It plugs into the charging plug and into the camera. The great news is you can charge off your – or any – computer computer, too. There's also an NP-45a lithium ion battery that Fujifilm says has a life of around 200 shots as long as the camera is kept in Auto mode. That will likely also include not looking at the screen to review pictures you've taken so in reality, this will be a smaller number.

The design of the XP60 is typical of Fujifilm waterproof cameras and other manufacturers too. There seems to be this need to make the camera look as though it's covered in armour as well as giving it the appearance of being designed like a submarine by placing rivets on the front of the camera. We described it as slim and it is, although it's certainly been padded out to make it shock-proof. It can still be fitted into a pocket, but it needs to have that extra protection.

Speaking of protection, the Fujifilm FinePix XP60 has been improved slightly against the XP50 which – we assume – is a replacement, but is most likely a step up in the range. After all, it's not just the 6m waterproofing that's better than the XP50's 5m. The resolution is a slightly higher 16 megapixel compared to 14 megapixel on the XP50. Is that necessary though? Well it's negligible in terms of viewing the pictures. You may see a difference in the maximum size you can print to. The XP50 has a FSI-CMOS sensor as do the other Outdoor range of cameras. It's not specified on the XP60 specifications, so we can only assume that the sensor is also Front Side Illuminated. We'd normally go on the fact that a BSI sensor is newer technology and therefore shouted about. It's interesting that Fujifilm have labelled their sensors as FSI, given that all standard sensors are FSI.

Being part of the Outdoor range, the Fujifilm FinePix XP60 boasts resistance to a number of problems that would normally wreck a digital compact camera. As well as the waterproofing to 6m (20ft) and shock-proofing to 1.5m (5ft or around mid-chest high on an average adult), the XP60 is also freeze-proof to -10ºC (14ºF) and dust-proof thanks to the same resistance that keeps water at bay. These features along with other USP's reinforces the camera as a companion for the traveller. Because when you add the protection to the built-in charger, fuel efficient CMOS sensor, SDXC memory card and anti-reflective coating on the LCD screen, It looks like it could handle any situation.

Build quality is exceptional. Let's face it, if it's not built to a high degree then it's Sod's Law that it will fail when you're scuba diving around MV Keith Tibbetts off the coast of Grand Cayman. The quality of the lens will be seen in during the test shots but we always wonder about the quality of the glass that sits in front of the lens to keep the water out. It will be multi coated to reduce flare and ghosting but what about chromatic aberrations or light dispersion? Arguably, it will be negligible and putting it into context, will the buyer of a camera at this price really care?

Despite being designed for underwater photography, the buttons are surprisingly small. They're bigger than you'd expect on a normal digital compact camera, but small for one that's to be used underwater – possibly with gloves. They feel firm and press in with a definite action so you can tell it's done even while not looking at it or if you were underwater.

The flash has been placed nearer the centre of the Fujifilm FinePix XP60 due to taking macro or marine photographs. The light will be more even for that type of photography but portraits could suffer from red-eye.

All the openings on the camera have been placed on one side of the camera which is covered with a watertight covering that umbrellas the whole side of the camera. The clasp is a wheel that has to be turned 90º to open while holding down a button in the centre. It sounds long winded but prevents accidental opening of the cover which would ruin the camera completely.

The menu system is minimal on the XP60 which is likely to prevent confusion and speed up using the camera when under water or in extreme cold. The Main menu is opened by pressing the centre button on the pad. There are two tabs for Shooting and Setup. The Shooting menu accesses the most used options such as resolution, ISO, white-balance and FinePix Colour while the Setup menu has more in-depth options such as date & time, language, format the card and operation volume. The menu is easy enough to see. The colours are bright and there's a good deal of contrast. Thanks will go to the anti-reflective screen for making it easier to see. Fujifilm could take the opportunity to play around with the menu system making graphics bigger – or even taking over from text completely.

From a cold start, the Fujifilm FinePix XP60 is great. We managed to switch the camera on, focus and take a picture in just over 1.6 seconds. Nearly a second faster than standard digital compact cameras. There are a number of continuous modes on the XP60. They're in the Main menu and there's four continuous modes and two Final modes. The Final modes will start taking pictures when you start holding the button down but it will only save the last few once you bring the button back up. The continuous modes get progressively faster and are burst types firing a quick succession of images instead of plodding at a reasonable rate.

As with the Main menu, Fujifilm haven't messed with the playback system. It works the same way showing images full size with basic information on the screen. This can be rotated through various options to remove it if necessary or only show images tagged as favourites. The Playback menu has the usual additions that Fujifilm put in recently such as the Photobook Assist and Image search. There's also some basic editing options to adjust brightness, contrast, colour and sepia. Video and pictures can be marked for upload to YouTube, Facebook and/or MyFinePix.com. Should you take a picture and discover that red-eye was present and it wasn't seen before, it is possible to remove it in the Playback menu. You can also do all the standard stuff such as Protect, Crop, Resize and Rotate images.