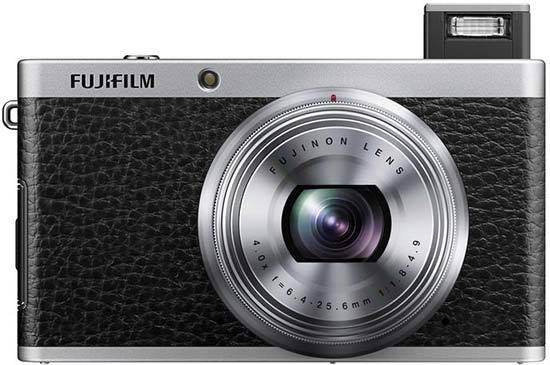 The Fujifilm XF1 is a classically styled camera with a beautiful retro design that can't fail to impress everyone that sees it. In an age where digital cameras are virtually ubiquitous, the Fujifilm XF1 stands out by a country mile thanks to it uniquely clean styling and solid build quality, not to mention a wealth of photographer-friendly features.

The XF1 sports a 4x, 25-100mm zoom lens with a fast maximum aperture of f/1.8 at the 25mm wide-angle setting. This sadly quickly falls off to a much slower f/4.9 at full telephoto, but in combination with the extensive ISO range of 100-3200 at full 12 megapixel resolution, the f/1.8 setting still makes the XF1 well suited to low-light shooting. It allows you to hand-hold the camera in places where you'd usually be reaching for a tripod (if permitted) or other support, especially as the camera also features built-in optical image stabilisation.

As with the other X-series models, the Fujifilm XF1 is a very well-built camera, with absolutely no flex or movement in its chassis. At the same time, it's actually lighter than a first glance might suggest, weighing in at just 225g with the battery and memory card fitted. Measuring 107.9(W) x 61.5(H) x 33.0(D) mm, it's almost pocketable but perhaps best suited to life in a small camera bag or large coat pocket. There are some plastic buttons and controls on the XF1, most notably the memory card / battery compartment door and the rear circular control wheel and buttons, but other that that the XF1 offers excellent build quality considering its price-tag.

There's no hand-grip at the front of the XF1 and just a small plastic thumb-rest on the rear, but your grip is helped in no small part by the textured faux-leather surface that runs around the full width of the camera. A small metal eyelet on one side of the body is used for connecting the supplied wrist strap, which isn't quite as luxurious as the rest of the package. A metal tripod mount is positioned off-centre from the lens away from the memory card / battery compartment, so you don't have to remove the camera from the tripod to change either of them.

Surrounding the lens is a manual lens zooming ring with 7 markings including Standby, 25, 35, 50, 60, 80 and 100mm. This ring performs three functions. By default the lens is stored almost within the body of the camera and locked into place. It's then unlocked by twisting it to the left and pulling it out to the Standby setting (the lens cover is still closed at this point). The XF1 is then powered on by a further twist of the lens ring to left to the 25mm focal length setting. If it sounds complicated, in practice it is at first, a fact that Fujifilm has clearly recognised by including a sticker on top of the camera and instruction sheet in the box that explain how to use the XF1's lens ring.

While we applaud Fujifilm for coming up with a new idea, in the case of turning the XF1's lens ring, we're not 100% convinced that it actually adds anything to the camera, other than an unnecessary layer of complexity. Firstly, the lens still protrudes slightly from the camera body when not in use, then it requires several left and right twists to turn the camera on. The Standby mode feels a little redundant, as you can't actually playback images or change camera settings until the lens ring is set to the first focal length, and turning the camera on feels a lot slower than the 0.55 second start-up time that Fujifilm specifies. We'd actually prefer a simple on/off button.

On the plus side the lens ring does allows you to quickly zoom the lens and set the focal length by turning it, with a short and tactile movement. It's a little awkward to use when holding the camera at arms length though, where a more conventional zoom lever would be preferable, although the focal length markings on the horizontal zoom scale that appears on the LCD screen proves helpful. All in all, though, the manual zooming ring works very well, although it practically begs you to hold the camera up to your eye, which won't get you very far given the absence of an optical viewfinder.

At the heart of the XF1 is a 12 megapixel 2/3-inch EXR CMOS sensor, a size that was used by several bridge-style compacts in the past but which has recently fallen out of favour. This sensor is larger than those in most compact cameras and promises to deliver better image quality, although not the equal of a compact system camera or a DSLR. Fujifilm's EXR sensor can be utilized in one of three ways by the photographer. There's a choice between shooting at full 12 megapixel resolution in High Resolution (HR) mode, or a 6 megapixel image in the Low Noise (SN) mode for shooting without flash in low light conditions, or the Dynamic Range (DR) mode to achieve an optimal balance between shadows and highlights. The latter offers five strengths ranging from 100-1600%. If you can't decide which is best for a chosen scene or subject, then just leave the camera on the scene-detecting EXR Automatic Mode and let it choose for itself.

We ran into some issues in bright sunlight when shooting in aperture and shutter priority modes, where the top shutter-speed limit of 1/2000th second at f/1.8 often caused under-exposure. The XF1 doesn't feature a built-in Neutral Density filter, so you'll have to stop-down the aperture and sacrifice some depth-of-field to avoid blowing out the highlights. The XF1 offers a good close focusing distance of 3cms, so macro shooting is definitely on the cards.

The Fujifilm XF1's auto-focusing speed is thankfully pretty quick , with Fujifilm quoting focus acquisition in as little as 0.16 seconds. In practice there's a very slight delay as it locks onto the subject, but it's more than fast enough for everyday shooting, especially as it's accurate virtually 100% of the time in both good and bad light. There is one small fly in the ointment though. Normal focusing is from 50cms to infinity at 25mm wide-angle, so if you want to get closer to your subject than that and still be able to auto-focus, you have to remember to select the Macro mode, which gets you as close as 3cms from your subject.

Manual focusing is activated by setting the Focus Mode menu option to Manual and using the rear thumb-wheel to set the focus point, with the LCD display automatically zooming in on the subject to help you judge the sharpness. It takes a lot of turns to move up and down the distance scale, not helped by the rather un-responsive thumb-wheel, which makes manual focusing with the X0 much more of a chore than a pleasure.

The Fujifilm XF1 has a high-resolution 3 -inch LCD monitor on the back, which has 460k dots and offers 100% scene coverage. To make the camera less obtrusive, there's a Silent menu option which turns off the speaker, flash, AF-assist lamp and most importantly the artificially-created shutter-release sound, instantly making the XF1 perfectly suited to candid photography.

In terms of operational speed, the Fujifilm XF1 has some real standout highlights, but also a few weak points. Shutter lag is virtually non-existent on this camera, so once you have set the focus, you'll never miss the moment because the camera can't fire the shutter quickly enough. Continuous shooting speeds are also good, with a top rate of 10fps, although that's only when shooting JPEGs at the 6 megapixel M setting, with 7fps available for full-resolution 12 megapixel JPEG images. Note that if you're shooting RAW, the fastest possible rate is 7fps at 6 megapixels, rather limiting its usefulness. Shooting a single RAW + Fine JPEG takes about 6 seconds to record to the card, although thankfully you can take another shot almost straight away. Taking a 7 frame 12 megapixel JPEG burst only took the camera a few seconds to save, during which time you can't take any more pictures.

On top of the XF1 are the tiny Fn button which by default provides quick access to the ISO speeds, but can be customised to suit your own needs from one of 10 different settings, a small but responsive shutter release button, a traditional shooting mode dial which is completely recessed within the top plate, and the camera's built-in pop-up flash, which has a range of 50cm - 7.4m at ISO 800.

The Fujifilm XF1 can record 1080p movies at 30fps with stereo sound, turned on by pressing the one-touch records button on the back of the camera. There are also several slow motion options - 70fps at 640x480 pixels, 120fps at 320x240, and 200fps at 320x112. You can set the aperture and shutter speed before recording begins, but not during, and you can also set the Film Simulation mode, so black and white footage is possible.

Center or continuous auto-focusing is possible, but unfortunately you can't manually focus at all, which rules out some creative effects, and face detection can be enabled. There is a HDMI port for connecting the XF1 to a high-definition TV, although as usual there's no cable supplied in the box. Also missing is a paper copy of the otherwise helpful manual, which is supplied on CD-ROM instead, along with the consumer MyFinepix software the slow and rather unintuitive RAW convertor (essentially a specially customised version of the commercial Silkypix application).

The XF1 has a well thought-out rear control layout. All the controls are on the right of the LCD screen, with four buttons surrounding the circular control wheel with the rear control dial positioned above where your right thumb naturally rests. The top two buttons are for image playback and recording movies, while the bottom two change the LCD display (or goes back) and access the new E-Fn menu.

Pressing the E-Fn button effectively expands the number of external controls on the rear from 8 to 14 by assigning new functions to the top two buttons and the four positions on the control wheel, helpfully explained by an onscreen graphic. Even better, the 6 E-Fn settings can be customised to one of 14 different options, which really allows you to setup the XF1 to suit your needs.

The circular control wheel can be used to change the shutter speed and aperture and select other settings, while around it are four options for setting the exposure compensation, flash mode, self-timer and focusing mode. In the middle of the control wheel is the Menu/OK button, which accesses the Shooting and Set-up main menus.