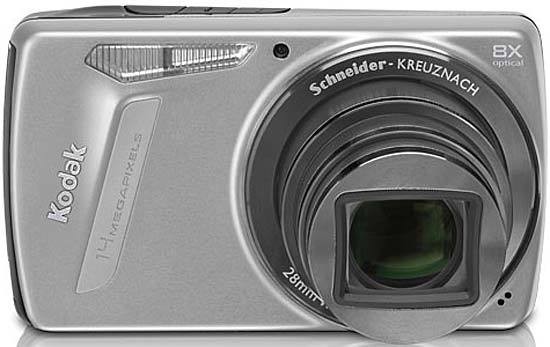 The Kodak Easyshare M580 is the new flagship camera of the beginner-friendly M series digital compact camera range. Featuring 14 megapixels of resolution and an 8x optical zoom that spans a focal range of 28-224mm, the M580 also has a 3 inch LCD screen, captures HD video with a built-in HDMI connector, and boasts Face Recognition technology. The Kodak Easyshare M580 is available in silver, light blue, brown, purple and pink for £179.99 / $199.95.

Kodak digital cameras haven't exactly been feted for their contemporary, cutting edge design. So the sharp, angular detailing - partly disguising what is, in effect, another rectangular box - along with the compact, pocket-friendly proportions, ensure the M580 comes as a refreshing surprise as we heave it out of its equally slender box. What feels like a step in the right direction for Kodak - particularly when considering that this point and shoot model is being loudly pitched at the happy snapper/Facebook/YouTube brigade - is compounded by the news that the EasyShare camera is priced at a reasonable £159.99 in the UK. Therefore it's within reach of the teen/twentysomething market.

Of course, competition in this sector is fierce, so what is the M580's unique selling point? Well, 14 effective megapixels from a 14.5MP 1/2.3-inch CCD sensor and internally stacked 8x optical zoom aside, as is de rigeur for pocket snapshots these days the M580 comes in a choice of colours including the brown sample we had in for review. The shade is not nearly as nasty in reality as it sounds on paper - think luxurious caramel rather than farm slurry. The build, being mostly metal, adds to its premium feel that transcends the budget pricing. Overall pocket-friendly dimensions are 100.8x59.5x25.6mm, so it'll slip easily into a pair of jeans or handbag, and the device weighs a lightweight 150g without rechargeable lithium ion battery and optional SD or SDHC media.

The camera comes with the Kodak standard issue Schneider-Kreuznach optics, its optical zoom offering an equivalent reach to 28-224mm in 35mm film terms when unfurled. The screen on the back is a good sized 3-inches at a resolution of 230k pixels, and Kodak's scene/subjecting recognizing Smart Capture technology plus one-touch Share button - for uploading pictures to Kodak's online Gallery or the major social networking sites - also make a reappearance along with the now expected HD video capture. Here that's a maximum 1280x720 pixels at 30fps, with an option to downgrade this to a standard definition 640x480 pixels at an identical frame rate.

The M580 is not issued with a standalone battery charger, unlike 99% of rivals. Though the lithium ion pack can actually be removed from the camera it is charged in situ, Kodak providing just an adapter plug and a cable that doubles up as USB lead and a means of connecting the camera to the plug. It's a case of keeping things simple, while also reducing the number of peripherals needing to be shoehorned into the box.

It's only when you start to use the M580 for any length of time that its initial good looks start to become overshadowed by the fact that its operational buttons - especially those on the top plate which have been styled within an inch of their lives - prove to be more fiddly than you'd imagine. For example you have to press down quite hard on the power button to get the camera to (slowly) respond, and the other buttons are hard to differentiate between without taking you eyes away from the screen at the rear, as they run adjacent to each other in a concertinaed strip and are afforded near identical prominence. So, a degree of user friendliness has been sacrificed at the altar of style, which begins to quickly undo the goodwill built up by the external good looks and solid-feel construction.

Returning our attention to the front of the camera, the faceplate is obviously dominated by the bigger than average optic, with automatic lens cover to protect it from the elements when not in use. A microphone is hidden below right, and a small AF assist/self timer window is located top left, next to the flash, shaped like a discarded piece of flint. The location of the flash plus the camera's overall compact dimensions mean that it's easy for a fingertip to stray in front of it; a common issue with most pocket cameras.

Set at a sloping angle beneath is a thin strip of rubber that acts as a purchase point for the fingertips when gripping the camera to shoot hand held. Set into the tapering polished chrome strip on the M580's top plate are, from left to right, the on/off button, dedicated flash control button, and shooting mode button, the final button being the shutter release button, itself shaped like the blade of a kitchen knife.

With a press of the power button the camera readies itself for action, 28-224mmm equivalent lens barrel shooting out from the body accompanied by a mechanical buzz and rear screen bursting into life a second or so later, the entire process taking three seconds. Because it is thin, narrow and set into the top plate at an awkward angle, the user has to press down quite hard and precisely on the power button to get it to respond.

Next up is the dedicated flash button. The options that are accessible here are dependent on whichever shooting mode has been selected. In Smart Capture shooting mode the options are auto flash, red eye reduction and flash deactivated, such options summoned up as small icons top left of screen with subsequent presses of the same button. Program mode adds forced/fill-in flash, and that's it.

The third button along governs the shooting modes, which are presented as a brief toolbar that 'unfolds' down the left hand side of the screen. The options here are the aforementioned Program and Smart Capture modes, joined by movie mode and scene mode. While the alternatives are self-explanatory, highlighting the scenes mode option and pressing the 'OK' button in the centre of the directional control pad on the M580's backplate, brings up an array of options filling the screen as small yet universally recognisable icons. The 18-strong pre-optimised scene settings govern the regulars of portraits and landscapes, adding in fireworks, snow, beach and baby modes, self portrait, sports, panorama, high ISO (maximum ISO1600) and the ilk to appeal to the widest consumer audience.

With a brief pause whilst focus and exposure is determined, AF point highlighted in green accompanied by a beep of confirmation, the camera writes a full resolution JPEG image to memory in around two seconds.

Moving to the M580's back plate, obviously dominated by its three-inch screen in the absence of any optical viewfinder, top right is a thumb-operated rocker switch for adjusting the zoom, which, like the camera upon powering up, seems to 'think' for a moment before actually responding. When it gets going, it glides smoothly through the range accompanied by a low mechanical noise.

Just below the zoom rocker to the left are a trio of vertically stacked, identically sized buttons. But when it comes to telling what they actually do, we're sorry to report Kodak still hasn't sacked its graphic designer. The top button, sporting an icon misleadingly shaped like a hot water bottle rather than familiar trashcan, is in fact a dedicated delete button, though you wouldn't immediately know it. The next one down, showing a text box, is identified by a process of elimination as the menu button, whilst the bottom button of the three is quizzically marked with an 'i' - and therefore a button we can imagine most beginners will be reaching for first to glean a nugget of information. But, this is actually where we find the self-timer and burst mode options, and additionally, when in Program mode, the ability to alternate between auto focus and macro and infinity focus. For a model that is presumably pitched at beginners, Kodak doesn't make things easy.

A press of the 'menu' button meanwhile brings up two folders on screen, one for capture, the second a set up menu. It's in the former that the user can govern picture size. Aside from shooting at 14 megapixels in 4:3 ratio, there's the ability to vary the ratio and so the resolution, to include shooting in a widescreen 16:9 ratio with a drop to 10 megapixels as the camera is effectively cropping the image. It's also here that when shooting in Program mode, ISO speed, exposure compensation and the like can be tweaked. We also enjoyed the long(er) exposure settings to be found here, which proved more effective for night time shooting than the night modes within the scene settings. Like the camera itself it's modest though. The shortest duration is 0.5 seconds, and the longest is four seconds.

Just below this control trio and to the right is the aforementioned four-way control pad that is devoid of any markings at all; it appears purely a directional navigation tool pure and simple. As we've also indicated, a press of the middle 'OK' button brings up shooting options on-screen - it is in effect a 'quick menu' button, rather than just a means of implementing any menu or shooting mode changes. Just below this control pad are a playback button bottom left, and the familiar red Kodak 'Share' button bottom right for the selection of favourite shots pre-download and uploading or emailing. All simple enough.

Given the camera's relatively modest nature, it's a surprise to find an HDMI port under a rubber flap on the right hand flank of the M580 - if the camera is viewed from the back, alongside a joint AV out/USB port, to which the provided lead attaches for the downloading of images if you don't own a card reader, plus the re-charging of the internal battery when required. There's no relevant HDMI cable included in the box this time. Beneath this compartment is a lug for attaching the wrist strap provided in the box. On the left hand flank of the camera we find a built-in speaker and that's all.

The base of the M580 meanwhile features the standard screw thread for the attachment of a tripod, plus shared compartment housing battery and slot for optional SD or SDHC expansion, a modest 64MB internal capacity provided to fall back on out of the box.