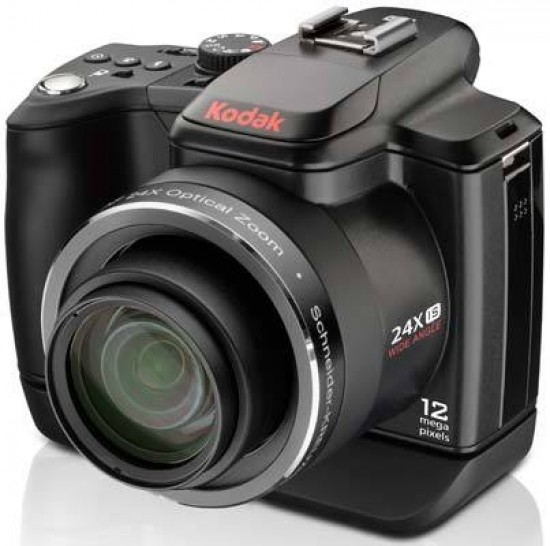 The Kodak EasyShare Z980's image quality is below average. The Kodak EasyShare Z980's main drawback in terms of image quality is noise, which is evident at the base ISO speed of 64 in both JPEG and RAW files. The noise gets progressively worse as you go from ISO 100 to ISO 400 and then up to the virtually unusable ISO 800 and 1600 settings. Also problematic are the bright, over-saturated and frankly in-accurate colours (which some people may like), and the fairly obvious smearing of fine detail in all of our test photos.

The Kodak EasyShare Z980 dealt with chromatic aberrations pretty well, with purple fringing effects appearing only in high contrast situations. The 12 megapixel images were soft straight out of the camera, but you can change the in-camera sharpening level if you wish. The night photograph was fine, with the maximum shutter speed of 16 seconds allowing you to capture enough light for most situations.

The built-in flash worked well indoors, with no evidence of red-eye and good overall exposure. Macro performance is excellent, allowing you to focus as close as just 1cm away from the subject at the wide-angle lens setting. Anti-shake is an essential feature on a camera like this and one that works well when hand-holding the camera in low-light conditions or using the telephoto end of the zoom range. There was very obvious barrel distortion evident at the 26mm wide-angle lens setting.

There are 6 ISO settings available on the Kodak EasyShare Z980. Here are some 100% crops which show the noise levels for each ISO setting, with JPEG on the left and the RAW equivalent on the right:

The Kodak EasyShare Z980's 24x zoom lens provides a focal length of 26-624mm in 35mm terms, as demonstrated below.

The Kodak EasyShare Z980 has 3 different image quality settings available, with Fine being the highest quality option. There is also a RAW mode. Here are some 100% crops which show the quality of the various options, with the file size shown in brackets.

Here are two 100% crops which have been Saved as Web in Photoshop. The right-hand image has had some sharpening applied in Photoshop. The out-of-the camera images are soft at the default sharpening setting and benefit from some further sharpening in a program like Adobe Photoshop. You can also change the in-camera sharpening level to suit your tastes via the Sharpness option in the main menu.

The Kodak EasyShare Z980 handled chromatic aberrations well during the review, with some purple fringing present around the edges of objects in certain high-contrast situations, as shown in the examples below.

The Kodak EasyShare Z980 offers a Super Macro setting that allows you to focus on a subject that is 1cm away from the camera when the lens is set to wide-angle. The first image shows how close you can get to the subject (in this case a compact flash card). The second image is a 100% crop.

The flash settings on the Kodak EasyShare Z980 are auto, off, fill, and red-eye reduction. These shots of a white coloured wall were taken at a distance of 1.5m.

And here are some portrait shots. As you can see, neither the Flash On or the Red-eye Reduction settings caused any amount of red-eye.

The Kodak EasyShare Z980's maximum shutter speed is 16 seconds, which is good news if you're seriously interested in night photography. The shot below was taken using an aperture of f5.6 and shutter speed of 10 seconds at ISO 100. I've included a 100% crop of the image to show what the quality is like.

The Kodak EasyShare Z980 has an Image Stabilisation mechanism, which allows you to take sharp photos at slower shutter speeds than other digital cameras. To test this, I took 2 handheld shots of the same subject with the same settings. The first shot was taken with the Image Stabiliser option turned off, the second with it turned on. Here is a 100% crop of the image to show the results. As you can see, with Image Stabilisation turned on, the images are sharper than when it's turned off. This feature really does seem to make a difference and could mean capturing a successful, sharp shot or missing the opportunity altogether.