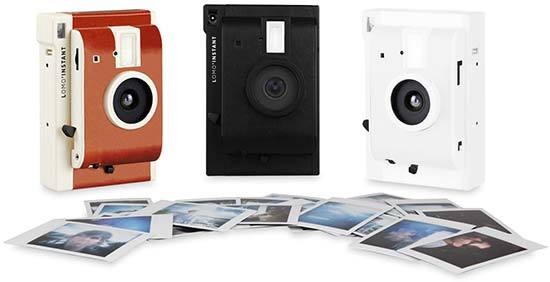 In recent years, the Lomography brand has brought old-fashioned analogue cameras back into the forefront of many people’s minds, offering kitsch fun harking back to the “good old days”.

The latest in its line-up is its first instant camera, which was funded to great success by a Kickstarter campaign. It uses the Fujifilm Instax mini film, which is easy to pick up, and much cheaper (by comparison) to Polaroid Impossible project film.

This camera is pitched as an “advanced” instant camera, which means that it has quite a few different controls. You can buy the Lomo Instant on its own, or in a kit which comes with lens attachments to expand its potential to create wide-angle, portrait and close-up shots.

As it is, there is one built in lens which has a focusing distance of 0.4 metres and is equivalent to 27mm. You can also create multiple and long exposures, and there are coloured gels available in the box for the inbuilt flash.

Unlike most entry-level digital cameras which are pretty easy to get started with, it will probably benefit you if you spend some time getting to know the Lomo Instant before taking your first shot.

The Lomo Instant itself is quite utilitarian in appearance, with a boxy look as it needs to incorporate the rectangular shape of the film. It’s pretty large so it’s certainly not something you can easily slip into a jacket or coat pocket.

On the bottom of the Lomo Instant is a switch for turning on the camera. You have three different options to choose from, which includes automatic (with flash, designed for all-purpose shooting) and creative with flash plus creative no flash.

Various aspects of the Lomo Instant can be altered by using the controls on the front of the camera. You can alter the focus range, allowing you to switch from 0.4-0.9 metres to 1 metre to infinity. If you attach one of the lens filters, you will need to change this depending on which attachment you’re using (a full set of instructions comes in the box).

There’s also a switch here for activating multiple exposures, marked with MX. If you move this into the MX position, you can continue to take as many shots as you like until the switch is moved down again whereupon the film will be released with the multiple exposure.

If you attempt to take a photo while the camera is switched off, the next time you take a shot with the Lomo Instant on, you will get a double exposure - so that is something to watch out for, especially given that the camera will automatically turn itself off after a while.

To load the film, all you need to do is open the back of the Lomo Instant and slot the rectangular film pack into the appropriate place. A yellow line appears on both the film pack and the camera itself to help you line it up correctly. Once the film is in, you will need to take a shot to get rid of the black piece of plastic which protects the film pack.

The additional lens filters screw onto the inbuilt lens. Using the viewfinder is quite tricky as it sits on the top left of the Lomo Instant and is simply a hole in the top of the Lomo Instant. It’s not too bad when you’re using the inbuilt, with the adaptors, especially the fisheye, you’ll generally need to use your best guess to get the shot you want. You do start get used to judging composition after you’ve been using the camera a while.