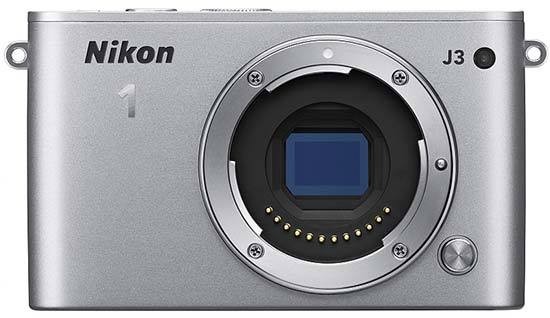 In what must be one of the quickest releases in recent memory, the new J3 replaces the previous J2 model after a mere 4 months on the shelves. Featuring the same 14 megapixel sensor as the flagship V2 and a more simplified control layout than the J2, the J3 is now the middle model in the Nikon 1 lineup in terms of build quality and features. It's also had a rather significant price increase, which ultimately takes some of the shine off its overall appeal as a fast and capable step-up model for compact camera owners.

The Nikon 1 J3 offers many of the key features of its more expensive and bigger brother, the V2, in a smaller, lighter and simpler package that is even more clearly targeted at people upgrading from a compact. It also shares the same idiosyncracies, however, regarding its low-light focusing and user interface, and it suffers in direct comparison to the V2 by not having an electronic viewfinder, accessory port, mechanical shutter and longer battery life.

In good light the Nikon J3 is as fast as anything on the market when it comes to auto-focus speed. Even if you compare it to pro SLR cameras with fast-focusing lenses, the Nikon 1 J3 comes out favourably, both in terms of sheer speed and accuracy. Its headline-grabbing 60fps burst mode might not be quite as useful as it may sound, but the fact that it can also shoot at 15fps and keep the subject in focus is pretty sensational, especially if you consider that we are talking about a camera that’s a lot smaller than a typical SLR. We're also pleased to see the high image quality has been maintained despite a big jump in the megapixel count.

While the Nikon 1 J3 is a good fit for beginners, it's not so well-suited to serious amateurs. The J3 is a very small, high-quality, discreet and generally fast camera but its interface is quite clearly not geared toward users who like to take full control of the picture-taking process. Most of the features these photographers want are there, but too many of them are buried within the menu, which is bound to be a source of frustration to any power user. The V2 is a much better fit for prosumers.

Which leaves the J3 in something of an odd position - simpler and cheaper than the flagship V2, but more expensive than the new S1 entry-level model, and therefore not the first Nikon 1 model that naturally springs to mind for many would-be upgraders for whom price is a primary concern. We still like the Nikon 1 J3, but are ultimately left a little confused by the simplified control layout that appeals more to beginners, and the bigger price-tag that doesn't...