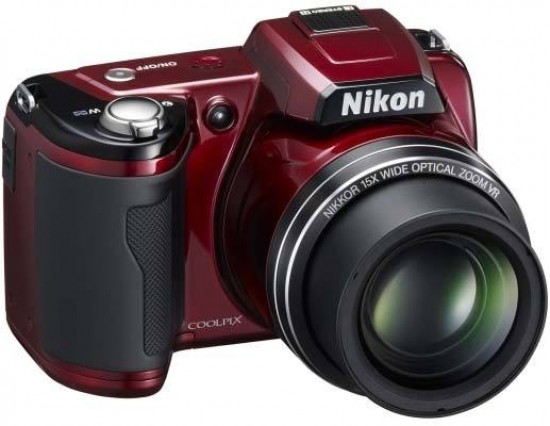 The Nikon Coolpix L110 is an affordable 12.1-megapixel camera with 15x optical zoom, sensor-shift Vibration Reduction, HD movie recording with stereo sound and a 3-inch LCD screen with a resolution of 460,000 dots. Other highlights include over a dozen scene modes, a 1cm macro mode and a cool Sport Continuous mode that shoots up to 30 frames at 11fps at reduced resolution. Available in a choice of wine red and black, the Nikon Coolpix L110 can be yours for $279.95 / £179.

Last year when we reviewed the Nikon L100, we found that while the camera had potential, there were quite a lot of things to criticise too - so we were naturally curious to find out if its successor, the Nikon Coolpix L110, addressed the issues we had with the older model.

Outwardly, the cameras are very similar, though not identical to each other. The Nikon Coolpix L110 retains the fairly big and comfortable hand-grip of its predecessor, which still houses the four AA batteries needed to power the camera. As with the L100, the batteries share their home with the memory card; and given that there is nothing to keep them in place when the compartment door is open, you had better be careful when changing cards.

The front of the L110 is of course dominated by the large lens, even when it sits retracted into its housing. Upon power-up, the lens extends, provided you have not forgotten to remove the lens cap beforehand. If you have, you will not only need to remove it but also to power the camera off and on again - this is one of the more minor issues we would have liked to see addressed in the new camera. The lens is not terribly fast in terms of its maximum aperture, which is f/3.5 at wide angle and f/5.4 at the telephoto end. The focal  range, on the other hand, commands respect, starting at 5mm (equivalent to 28mm) and going all the way to 75mm (equivalent to 420mm).

Thankfully Nikon have included Vibration Reduction (VR) to help prevent camera-shake, an essential feature on a camera like this. As is the case with many other Nikon compacts, VR in the L110 is of the sensor-shift variety rather than the in-lens version used in the manufacturer's SLR system. In addition to “pure” mechanical vibration reduction, you may choose a “hybrid” form of image stabilisation, in which case sensor-shift VR is complemented by a solution that involves taking two shots in succession, which are then combined in-camera for greater effect. Naturally this takes more time, but can yield better results in certain circumstances.

There are relatively few external controls on the Nikon Coolpix L110. The top plate features a power button and the shutter release, surrounded by the zoom lever - and that's it. The flash has to be raised manually, using your fingertips - there's no button for this, and it is one of the few things the camera will not do for you automatically, either. Just behind the flash we find one of the few novelties versus the L100 - a pair of microphones designed to record stereo sound when shooting movies. By contrast, the older model had a simple mono microphone located on the front plate, next to the lens.

Most of the camera's rear panel is taken up by the three-inch LCD screen, whose resolution has been increased from 230,000 to 460,000 dots. Another improvement, which you will quickly learn to admire when shooting outdoors in bright light, is the addition of an anti-reflex coating. Make no mistake - this is still a glossy screen, but it is quite usable for framing your shots, even in direct sunlight; an important virtue given that the L110 has no eye-level viewfinder of any sort. As for image review, well, this is something you will still want to do in the shade of your body rather than out in the sun.

The layout of the rear controls is almost the same as on the L100, with one important difference: the old controls have been joined by a new movie record button marked by a red dot. This means you no longer need to select a dedicated movie shooting mode from the menu, but can start filming whenever you want. Unfortunately, it still takes the Nikon L110 a couple of seconds to actually begin recording a video clip after you've pushed the movie record button.

One thing that sets the Nikon Coolpix L110 apart from the competition, especially at this price point, is that you can use the optical zoom while filming. Zooming is slower than in stills mode, but that's actually a good thing - most videographers like to zoom slowly. A side benefit of this is that the sound of the power zoom is not really picked up by the microphone. Note however that the image is likely to go out of focus when you zoom in or out, and the L110's AF system adjusts itself a lot more slowly than that of the P100, for instance.

The other rear-panel controls are the same as the ones found on the L100, including a Shooting Mode and a Playback button, a standard four-way navigation pad, plus the indispensable Menu and Erase buttons. The navigation buttons give quick access to four oft-used functions, which thankfully include exposure compensation. The other three are the macro, self-timer and flash modes, although as noted earlier, you have to manually raise the flash in order to be able to use the latter. A centred OK button is used to confirm changes to settings. One novelty versus the L100 is that you can now go from Playback to Record mode simply by lightly tapping the shutter release; you are no longer required to  use the Shooting Mode button for that (although you can if you want to). From a usage point of view, this is one of the greatest improvements over the previous model. On a less positive note, it takes several seconds until you can actually start taking pictures after switching from Playback to Record mode.

Another big change is that you can now set the desired ISO speed yourself. The inability to do so was our biggest issue with the L100; it's good to see Nikon has addressed this problem. You do have to enter the menu to access the sensitivity settings - there's no dedicated button for that - and you have to be in Auto mode to have that menu option, but it's great to see this feature included. Note however that you still can't control the other exposure variables, i.e. aperture and shutter speed. This is reserved for the more expensive P100 model.

In addition to the Auto and Easy Auto shooting modes - the latter of which makes use of the  scene auto selector feature to figure out what the best settings are in any given shooting situation - the Nikon Coolpix L110 offers up 13 user selectable scene modes, including Portrait, Landscape, Night portrait, Party/indoor, Beach/snow, Sunset, Dusk/dawn, Night landscape, Close-up, Food, Museum, Copy and Backlight. In these modes, you typically get access to the flash and self-timer modes as well as exposure compensation, and with some, the macro mode as well.

The camera has a panorama assist feature too, which is also found among the scene modes. It works like this: you take the first picture after applying flash mode, self-timer, macro and exposure compensation settings as required, and then the camera superimposes a third of this photo on the live image. This helps you compose the next shot with a decent amount of overlap for easy stitching on the computer. You can repeat this step until you have taken enough photos to cover the scene. The camera locks the exposure, white balance and focus at the values set with the first shot. The photos taken for the panorama can be stitched on the computer with the aid of the supplied Panorama Maker software. The camera won't auto-stitch them for you though.

One of the more interesting features of the Nikon Coolpix L100 is the Sport Continuous shooting mode. The highest selectable resolution is restricted to three megapixels, but you can shoot at a speed of up to 11 frames per second for up to 30 frames in a row. This can be helpful with capturing fast motion, although I have found that focus tracking does not work in this mode, meaning your subject may go out of focus if its distance to the camera changes while it moves.

A number of other continuous shooting options are available in Auto mode. At full resolution, the camera can take up to 4 frames at a rate of about 1fps. In addition to that, the L110 also features Nikon's Best Shot Selector (BSS) and Multi-shot 16 modes. The former automatically chooses the sharpest of up to 10 photos taken in succession with the shutter release held down, while the latter involves taking 16 shots at approximately 7.4fps and arranging them into a single 5-megapixel image.

Like the L100, the L110 has a Smile mode in which the camera hunts for smiling faces and fires off a shot whenever it detects one, without user intervention. After the photo is taken, both face and smile detection resume, so that the camera can take more shots of smiling people. Do note though that if the flash is raised, you cannot take another shot until it is fully recharged.

The Nikon Coolpix L110 provides a rather limited scope of editing functions in Playback mode. These include D-lighting and resizing. D-lighting lifts the shadows in a picture of a contrasty scene without affecting the highlights - head to the Image Quality section for a demonstration. On the L110, it is strictly a post-capture thing - this camera does not offer the Active D-lighting function of Nikon's DSLRs. A nice touch about the Playback button is that it can be used as a secondary Power button when all you want to do is review what you have taken so far.

Shooting the Nikon Coolpix L110 was a much more rewarding - and much less frustrating - experience than using the L100. We've already mentioned a few reasons for this - you can now control the ISO speed if you want to, toggling between Record and Playback modes has become more intuitive, the LCD screen is nicer and easier to see in direct sunlight -, and we can add that low-light focusing appears to have been improved too. While the L100 also had a focus assist lamp, we found that it would often fail to lock focus in moderately low light. The L110, while not perfect, appears to be much better in this regard. Finally, the jump from VGA video with mono sound to 720p with stereo audio is not to be underestimated, either.

Having said that, we still see scope for improvement. “Having exposure compensation at your disposal is a good thing, but without a live histogram it is not as useful as it could be,” we wrote in our L100 review, and this is something we can only repeat here. A post-capture histogram would come in handy too. And, while it's nice to be finally able to control the ISO speed, it wouldn't hurt if you didn't have to dive into the menu to do that. Overall, though, the Coolpix L110 represents a step forward from last year's L100, and Nikon definitely deserves kudos for listening to user feedback.

This concludes our evaluation of the ergonomics, handling and feature set of the Nikon Coolpix L110. Let us now move on to the image quality assessment.