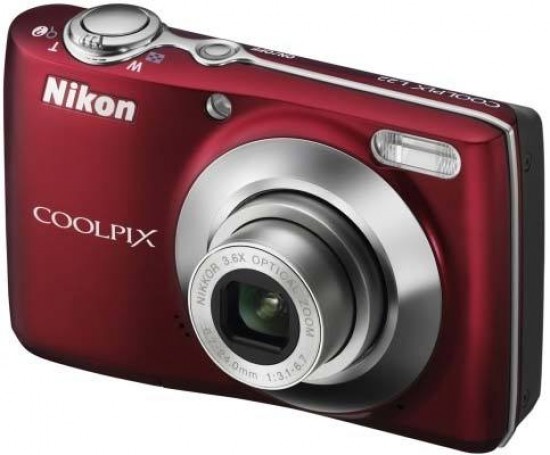 The 12-megapixel Nikon Coolpix L22 is one of the most affordable cameras in Nikon’s current line-up. Featuring a 3.6x zoom lens, a 3-inch, 230,000-dot rear screen, electronic vibration reduction, face and smile detection plus Nikon’s Best Shot Selector, Motion Detection and post-capture D-lighting technologies, the Coolpix L22 is powered by two AA-sized batteries and comes in a choice of black, red and champagne silver colours, priced at £79.99 / €95.00.

The Nikon Coolpix L22 is an easily pocketable digital compact camera that nonetheless feels substantial owing to the extra weight of the two AA batteries it uses. Made almost entirely of plastic, the camera appears surprisingly well built, with no obvious flimsiness or cheap feel to it. Characterised by gentle curves, the design does not look boxy at all. The right-hand side - when viewed from above - is slightly thicker than the rest of the camera, as this is where you find the battery compartment. Therefore, while the L22 does not have a true hand-grip, your fingers still have something to hold onto, which is a good thing. Speaking of the battery compartment, it has to be noted that it also houses the memory card - and given that the batteries have nothing to keep them in place when the compartment door is open, you had better be careful when swapping cards.

The Coolpix L22 has a 3.6x zoom lens that spans a 35mm equivalent focal range of approximately 37-134mm. The maximum aperture is f/3.1 at the wide end and a rather slow f/6.7 at full telephoto. Upon start-up the lens extends in about a second, and the camera is ready to take pictures almost immediately after that - excellent performance at this price point. Thanks to the relatively restricted zoom range, the lens travels from its widest setting to full telephoto in under two seconds, which is again very good. Apart from the lens, the front panel is home to a self-timer/AF-assist lamp, a tiny built-in flash, a speaker and a microphone serving to record sound with your movie clips.

The top plate features a power button surrounded by a green LED, plus the shutter release, which is encircled by the zoom lever. The latter is a novelty compared to the L20 of yesteryear, which had rear-mounted rocker buttons instead.  On the right side of the camera, when viewed from the back, is a neck strap eyelet that appears to be metal.

The rear panel is dominated by the three-inch, 230,000-dot TFT monitor. As it has a matt surface, I expected it to be easily viewable in direct sunlight, but was a little disappointed to see that the (glossy) screen of the L110 - which I also had with me during the review period - has actually proven to be superior. Having said that, the display was still quite nice for this class of camera. To the right of the screen is a flash lamp, Record and Playback buttons, standard four-way navigation pad with centred OK button, plus the indispensable Menu and Erase buttons. A nice touch is that the Playback button can also be used as a secondary power switch - just make sure to hold it depressed long enough, and you can use it to turn on the camera to review what you've shot (the lens doesn't extend in this case). One disturbing design flaw is that you can't get out of Playback mode by tapping the shutter release the way you'd do on virtually all other cameras - the only way to switch from Playback to Record mode is by pressing the Record button, which is not a very intuitive solution.

Speaking of the Record button, it brings up a graphical list of the available shooting modes, which include Auto, Easy Auto, Movie, Smart Portrait and sixteen scene modes including a panorama assist mode. Somewhat confusingly, Auto is the mode that gives you the greatest control over the shooting process; allowing you to access the file quality and white balance settings, the drive modes (single frame, continuous shooting, Best Shot Selector and Multi-Shot 16) and five colour options including Standard, Vivid, Black and White, Sepia and Cyanotype. The macro mode, the self-timer, the flash modes and exposure compensation are accessible directly via the four-way pad. You cannot, however, set the aperture, shutter speed or ISO speed in any of the shooting modes. In light of that, it seems almost perverse for Nikon to have included a manual white balance option in the WB menu.

As far as the drive modes are concerned, the continuous mode allows you to take photos continuously at a rate of about 0.9 frames per second (the manual says the L22 can sustain this rate for up to 5 frames, but I got nearly 30 in a row). In Best Shot Selector mode the camera takes up to 10 photos and automatically chooses the sharpest one, discarding the rest. In Multi-shot 16 mode, the camera captures 16 pictures in less than a second, and combines them into a single five-megapixel image.

The other shooting modes give you even less control over the picture-taking process, so the term "point-and-shoot" applies quite literally to the Nikon L22. In Easy auto mode, you can access a restricted set of flash modes, exposure compensation, file quality settings plus the self-timer - and that's it. In the scene modes, the amount of accessible settings is broadly similar, although some of them give you more flash options or allow you to toggle the macro mode on and off, etc. The camera has a panorama assist feature too, which is found among the scene modes. It works like this: you take the first picture after applying flash mode, self-timer, macro and exposure compensation settings as required, and then the camera superimposes a third of this photo on the live image. This helps you compose the next shot with a decent amount of overlap for easy stitching on the computer. You can repeat this step until you have taken enough photos to cover the scene. The photos are not stitched together in-camera; you have to do that on a computer.

Nikon's Smart Portrait mode utilises face and smile detection to take pictures of people when they are smiling. In this mode, the camera hunts for smiling faces and fires off a shot whenever it detects one, without user intervention.

The Nikon L22's movie mode is very basic - you can chose from two resolution settings including VGA (640x480 pixels) and QVGA (320x240 pixels). There is no HD option. Exposure compensation is not available for movies, and you cannot use the optical zoom, either. Sound is recorded, and the clips are saved in AVI format. We have found the quality to be fairly good for standard definition, but obviously no match for HD movies in the resolution department. Video exposure was spot on, and we had no complaints about dynamic range either.

In summary, the Nikon Coolpix L22 is a very basic camera that gets about as close to the true meaning of the term "point-and-shoot" as possible. Start-up and shut-down times as well as zooming are really fast for a camera that costs less than £100. Auto-focus speeds are perfectly acceptable too, at least in decent light. In low-light conditions, however, the camera often fails to lock focus despite having a focus assist lamp on its face plate. Continuous shooting speeds are nothing to write home about, but in this class, it is a good thing that the Coolpix L22 has a continuous shooting mode in the first place.

That rounds off our evaluation of the handling, features and performance of the Nikon Coolpix L22. Let us now move on to the image quality assessment.