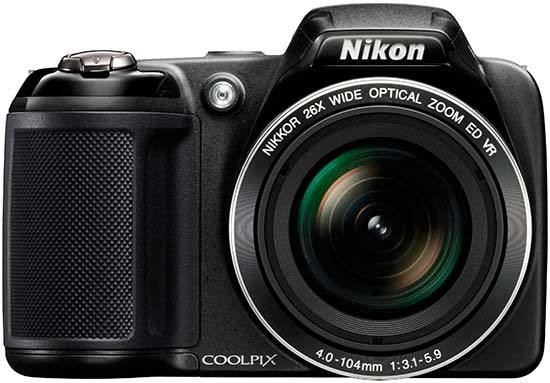 All images were taken at full resolution unless otherwise stated. At full resolution on the finest setting (denoted by a star next to the sensor resolution number), file sizes range from 6Mb to 7.7Mb. Dropping to the same resolution but with a lower compression rating, the file sizes will roughly halve in size. This will free up space on your memory card while retaining the same amount of pixels being used, but if you're taking images in fine detail, they will look more smudgy.

The ISO range on the Nikon Coolpix L320 starts at ISO 80 and finishes at ISO 1600. That's a pretty low end setting for today's cameras, though not unwelcome. It's no secret that with high resolution, comes high noise and in the past, Nikon compacts have been suffering. So to see them capping the sensitivity is a nice move.

At ISO 80, things start off well with sharp images and nice colours. There's no traces of noise in dark areas even when viewed at 100% magnification. ISO 100 is only a third of a stop difference in exposure, so it's no surprise that there's no change in noise. It's worth noting that if you shoot at ISO 80 all the time, should you get a shot where the exposure is struggling a little, knocking it up to ISO 100 won't make a difference to the overall image, but makes the sensor more responsive to light.

Sadly at ISO 200, we detected a slight merging of colours, which suggests that noise reduction software has started to work. It won't do that if there's no noise to work on. However, it does a good job at keeping it at bay. By ISO 400, we can start to see the noise come through while viewing at full magnification. For the record, viewing at normal distance gives a pretty decent picture. Close up, blacks are starting to turn green and sharp edges start to lose their crispness.

Blobs of colour noise appear on the image at ISO 800 as the noise reduction software fails to contain the amount of noise present on the photograph. The final setting has a last ditch attempt at sharpening the image and making it decent. In all fairness, it doesn't do that bad a job at it. There's a lack of primary colour in the picture, edges are blurry and colour noise is rife throughout, but we have to admit that we've seen worse at ISO 1600.

The Nikon Coolpix L320 has a 26x optical zoom. On the camera, that's a 4mm – 104mm zoom range, but we generally use 35mm equivalent which is 22.5 – 585mm. That's a large range and we're surprised at just how wide it goes. The great news is that there's minimal barrel distortion at the wide-angle setting but the sharpness drops off badly quite near the centre of the frame.

Typically, Nikon compacts haven't benefited from adjusting the sharpening in an editing suite. However, the noise seems to be under control sufficiently to sharpen the pictures and make it look better than the original.

At full resolution, there are two JPEG quality settings available including Normal and Fine, with the latter being marked with a star in the menu. The L320 does not save images in a Raw format.

We struggled to find chromatic aberration on any of the Nikon Coolpix L320's pictures, even with high contrast. When we did find it, it's right at the edges of the frame, so it shouldn't work out as too much of a problem in everyday life.

The macro mode of the Nikon Coolpix L320 is supposed to be 1cm, but we couldn't get that close. Well, that's not entirely accurate. We did get that close with the camera confirming focus each time we edged a millimetre closer. However, the pictures were out of focus.

There's slight amounts of vignetting at the corners of the frame when the flash is off. This is only made worse when the flash is fired. However, it goes at full zoom and using flash doesn't create any either. The light is even , spread nicely and gives the effect of ambient light, by reinforcing and stabilising the existing light instead of over powering it.

The Nikon Coolpix L320 has a sufficiently high flash to not suffer from red-eye. There's a red-eye reduction facility in the flash options, but we found it unnecessary. Flash options can only be accessed once the flash is raised by pressing the button on the left of the camera.

We really struggled with the night tests shots. The Nikon Coolpix L320 had a lot of trouble finding a focus lock. More accurately, the camera would say it was focused, but actually wasn't. We discovered that it was down to the amount of light coming in through the lens. The camera simply couldn't see enough contrast to get a lock. So, we shot a test at dusk to see if that helped and we managed to get the shot. The only downside is that the Night auto shot has balanced the exposure out so much that it looks like the middle of the day. The Scene mode shot is a more accurate portrayal of the type of light that was actually there, but because of the higher ISO to enable a fast enough shutter speed, it's riddled with noise. Kudos to the Night auto mode for doing what it's programmed to do, though. The noise is lower because we managed to use a lower ISO and slower shutter speed to let in more light.