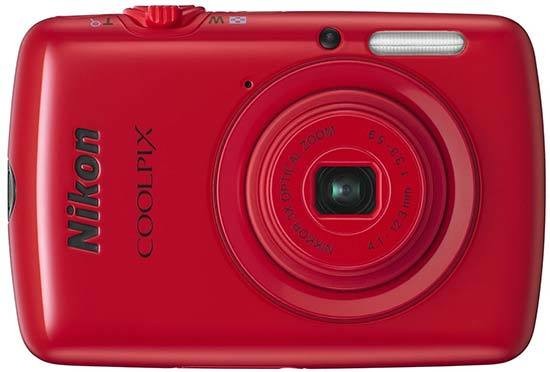 The Nikon Coolpix S01 is a 10 megapixel compact camera with 3x optical zoom, 2.5-inch touchscreen, 7.3GB of internal memory, built-in battery and a body that's smaller than a credit card. Other highlights of the S01 include 720p HD movie recording, an Easy Auto mode with Scene Auto Selector, and Nikon's EXPEED C2 image processing system. The Nikon Coolpix S01 costs $179.95/£149.99 and is available in a variety of colours including red, white, silver and pink.

Just in the (Saint) nick of time to catch the lucrative Christmas gifting market, the Nikon S01 arrives to a fanfare heralding it as the smallest Coolpix to date. Indeed, with its rounded edges and multiple colour options, including festive red and an even more eye catching mirrored version, it resembles a bauble you might hang on your fir tree. The camera is actually narrower in width and shorter in height than a credit card, and, if you make a fist with your palm, your fingers almost swallow up the S01 entirely. Official dimensions are 77x51.2x17.2mm and it weighs just 96g - meaning you can slip it into a top pocket and almost forget it's there. The above holds relevance, because looks and size appears to be pretty much exclusively what this model is being sold on.

While, when it comes to compact cameras, many may equate smaller with 'better', of course that's not always the case. So we'll be interested to discover which compromises - if any - have been necessary to bring the S01 to market. Is this cool-looking Coolpix truly the marvel of miniaturization that it seems?

Whether a camera the size of a matchbox appeals to you or not, when held in the hand first impressions are favourable. Build quality feels high and not at all plastic-y for a camera with a suggested retail price just under £150, or in reality a street price of around £120 at the time of writing. For that we get a huge (by digital camera standards) 7.3GB internal memory capacity, but, due to the compact dimensions, unfortunately no slot for a removable media card.

The battery is also entombed in the body and so is charged within. You can do this either with the aid of the mains adapter and USB lead supplied, or hook the S01 up to your desktop or laptop and charge it exclusively via any vacant USB port. This provides another option should mains power be unavailable. Battery life is good for an un-showy 190 shots, according to CIPA testing.

Whilst the above makes for a neatly hermetically sealed design, it does mean the camera is completely out of action every time it needs re-charging. In fact the only output port offered here is for USB/audio/video. Given the lack of physical connectivity options, a wireless alternative might have helped to provide another means of transferring/downloading stills and videos, but we don't get that here.

The headline features of the Coolpix S01 are otherwise as modest as the camera's proportions. We get a 10.1 megapixel effective resolution from a 1/2.9-inch CCD sensor, though impressively for a camera this size we do actually get a optical zoom too. However it's just 3x and offers a focal range the equivalent of 29-87mm on a 35mm film camera. In terms of low light performance without flash, a sensitivity range between ISO80 and ISO1600 is offered also - again, no great shakes but adequate under the circumstances. However, there appears to be no way to choose such settings for yourself - the camera chooses for you dependant on the subject it's pointed at.

The 'nuts and bolts' of the S01's operation revolve around a small-ish, 4:3 aspect ratio 2.5-inch touch screen - smaller than those now found on many mobile phones - boasting the 230k-dot resolution common to older or cheaper point and shoots. Such an implementation has allowed attendant physical controls to be kept to a minimum. Just a shutter release button encircled by a zoom lever, tiny lozenge shaped on/off button plus playback button are to be found on the top plate. Apart from the shutter release/zoom, these are set flush with the camera's exterior. With such a simple layout anyone should be able to pick up this Nikon and start snapping straightaway - even if there is not actually that much small screen 'real estate' to prod.

A thumbnail press of the power button and the S01 readies itself for the first photo or video in around two seconds, cute if stubby zoom barrel extending from flush to the body to maximum wideangle setting while the back screen bursts in life. Squeeze the shutter release button and there's a wait of a second or so whilst the camera determines focus and exposure - which is obviously slightly tardy by most standards. Squeeze the shutter release fully and a maximum 10 megapixel file is committed to the internal memory in two to three seconds, the screen momentarily freezing whilst this is completed.

The front of the S01 looks very clean and neat, and some would aver, stylish to boot. The lens is retracted within the camera body when it's switched off. Directly above the lens sits a small porthole for the self-timer/AF assist lamp, and alongside this there's a very narrow window housing the integral flash. A tiny pinprick indicates the built-in mono microphone. This is located top left of the lens if you're viewing the camera front-on.

Because the LCD which we have to work with at the back is relatively small - and there are no actual buttons save a touch sensitive 'home' control bottom right - Nikon has gone the other way and made the S01's key operational on-screen icons larger than most. So the four main shooting mode icons shown upon power-up are almost postage stamp sized. This initial operational quartet governs stills shooting (fully automatic only), video shooting mode, playback plus set up - with a tap of each icon placing the camera in that respective operational setting. Here video is the not quite full HD 1280x720 pixels, and with mono sound, and just a digital zoom can be deployed once recording has commenced, rather than being able to make use of the optical variety. The result is rather jerky looking footage. The second alternative video setting here is for 640x480 pixels clips.

To shoot video simply put the camera into video mode and squeeze the shutter release button to begin recording - the view on the LCD narrowing to ape 16:9 widescreen format. There is no separate video record button as we are increasingly used to seeing these days on digital compacts.

A vertically ranged sliding bar to the right of the screen indicates there is more to be found below this initial foursome. A flick of a finger accesses further choices including self timer (10 seconds, on/off), flash mode (auto flash, forced flash, off), special effects mode/s (more on which in a minute), exposure compensation (+/- 2EV), image quality mode (10 million, four million or two million pixels) and touch shooting (on/off). The last option of course, when the feature is activated, enables the camera's shutter to be fired merely by tapping a finger on the LCD. The small size - and the fact that merely in the act of gripping the camera the thumb can accidentally brush against the screen, means that it's all too easy to accidentally take a shot. Or start shooting a video of your shoes.

The special effects, or rather on-board digital filters, aren't exactly numerous here, but in the current 'app crazy' universe it's nice to have a little creative control as opposed to nothing at all. We're restricted to sepia, high key (ultra bright), low key (darker), plus our personal favourite of 'high contrast monochrome', which transcends the humble snapshot on which it's capture. All effects are applied at the point of the shot being captured. Because of the small overall camera size and the responsiveness of the screen, we did find operation of the S01 a tad fiddly - the camera rushes past what you actually wanted - and so we longed for a bit more 'meat' on its proverbial bones. The simple layout may suggest ease of use, but in practical terms this is not as much the case as we would have liked.

While the right hand flank of the Coolpix S01 features a lug for attaching the wrist strap provided in the box, the left hand flank is devoid of any features whatsoever. Up-end the camera and neither is there a screw for a tripod at the base. We get two miniature 'feet' for propping the camera upright on the desktop and a ringpull-like 'door' protecting the single port on the camera, but that's it. This is a basic device for someone who really just wants to point and shoot. But does its actual image quality transcend the cute styling and pocket-sized proportions to suggest a bigger beast? Click forward to our next section to find out.