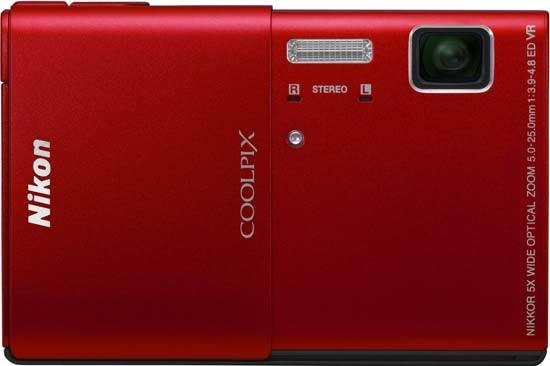 Introduced into the world just last month, the Nikon Coolpix S100 is a slim and attractive compact camera with a large and high-resolution 3.5 inch OLED touch-screen complete with multi-touch control system. Inside its slender frame is a 16 megapixel backside illuminated CMOS sensor, 5x optical zoom (28-140mm), Full 1080p HD video recording with stereo sound, and even 3D shooting. There's certainly a lot of technology packed into the Nikon Coolpix S100's body, and our review will find out if it's worth the £249.99 / $299.95 asking price.

If anything, the Nikon Coolpix S100 is slightly misleading in its design. It gives the appearance of being one of those cheap and cheerful entry-level models that are blindly bought online or from supermarkets. To see what it's capable of, you need to look past the pretty face and unveil the powerful innards.

As part of the snazzy design, the S100's lens has been offset to the top corner of the camera body and the zoom is internal so there's no external moving parts. A metal cover slides over the lens when it's not in use. The movement of the cover is easy enough but it does feel a little flimsy. Saying that, unless you get something caught under it, it's unlikely that it'll get broken.

As we mentioned in our preview, because it's slightly bigger than the other cameras that Nikon released at the same time, the Nikon Coolpix S100 looks huge, but it's actually smaller than an iPhone in height and width.

The S100's sensor is a backside illuminated type. If you're new to this type of technology, the way that the sensor is built has changed. Usually each photosite has circuitry surrounding it and the wires will cover a degree of the pixel. This means that it's not as responsive to light, so on a backside illuminated sensor, the circuitry has been placed on the back so that the full amount of light is captured by the pixels. It resembles a sensor put on backwards, hence the name.

There are 3 types of AF on the Nikon Coolpix S100. The Touch shutter option is defaulted when the camera is first turned on when you take it out of the box. If you change the options, they will remain until you change them again. The Touch shutter will focus on the part of the screen that you touch and immediately take a picture which is relatively fast but it does have a tendency to hunt. Subject tracking will lock onto the point that you touch and track that object you've selected while it remains in the frame.

Finally, Touch AF/AE will focus and meter off the point that you touch, like a selective spot metering and focusing. Pictures are sharp though and the only real problem we had with touch focus was that with small subjects, the camera had trouble locating them and gravitated towards the background.

On the back of the Nikon Coolpix S100 is a large 3.5 inch TFT LCD touch-screen and unlike the usual 3.5 inch touch-screens on some other cameras which cut off the edges (effectively making it 3 inch), the Nikon utilises the full amount of space. Because of this, the only button on the camera is the shutter release. It's an interesting approach and something we've been thinking about for some time. It seems the next logical step forward with touch-screens so it's great to see a camera designed this way. Interestingly, it's possible to take pictures without using the button by simply tapping the place on the screen you'd like to focus on and the S100 will take a picture straight away.

The OLED screen is very responsive and the 819,000 dot (273,000 pixel) resolution provides a bright, colourful display.
The Nikon Coolpix S100 is a camera that's designed to be appealing to two types of customer. There's the happy snapper who wants a pocket-sized point and shooter, and the tech savvy that want the good looks and up to date technology. It seems that the build quality is set for the former of the two who won't be as bothered.

Not that the S100 is badly made, after all it is a Nikon and they don't take build quality lightly. However, as we mentioned previously, the front lens cover feels flimsy and on top of that there's nothing to grip with when sliding it open or shut. It's not the easiest thing to do and we had to find purchase on the sticker or the Nikon emblem. While the body casing is made of metal, we suspect that the lens and battery covers are made of plastic. They're coated in paint that has the texture of metal so it's difficult to tell but the battery cover is certainly bendable. If it wasn't for the metal plate inside holding it to the camera, we think it could break easily.

Looking past the slippery sliding cover, the Nikon Coolpix S100 start up time is pretty fast. We managed to slide the cover open, focus and take a shot in just under 2 seconds. Focusing and taking a picture once the S100 is on is extremely fast at around half a second.

The S100 takes a lithium-ion battery which is provided in the box and comes in a nice plastic box. It's a symmetrical shape which means that it can be put into the battery compartment either way, but infuriatingly, it should only go in one way and it's not until you've got it nearly all the in that it won't go any further. Why can't the battery be a nice semi-circle or even an isosceles triangle if it helps?! Anything that will stop us from putting the battery in the wrong way first. Yes, we know the contacts are situated a particular way round but in the dark it's not always easy to see.

The Nikon Coolpix S100's layout has been rearranged with the battery/memory card compartment on the side and the HDMI/USB slots on the bottom. We think that this is to do with the S100 being able to charge from a laptop although it would mean that the screen could get damaged while the camera is laying on its back charging.

So let's take a look at the Nikon Coolpix S100's menu systems. Switching the camera on, 4 main options appear in the lower portion of the screen. They access the flash, self-timer, macro and exposure compensation options. In the centre of these is a menu button which brings up 5 more options for resolution, touch-screen, ISO, drive modes, white-balance and set-up. It's an intriguing decision to make and the division of features means that the screen remains cleaner and less cluttered which is great. Another good idea is that after 5 seconds of not using the menus, they disappear and a small button in the bottom right of the screen replaces them. Pressing this button brings the original options back.

As photographers, we don't like the fact that resolution, ISO and white-balance have been pushed to a secondary menu system, but thinking about the main user of the S100, the decision is perfect. The zoom is situated at the right side of the screen slightly lower than half way while the record/playback option reflects the zoom being at the left side slightly above the half way line.

It's a great layout, Nikon have thought hard about where to put stuff and in what order. It certainly works and we're pleased to see a camera with a different outlook on what the menus should look like. Even the set-up menu is different using thumbnail sized boxes instead of lines of text. However, it would be nice to see some movement in where things are laid out. We would love to see the menu options amendable for whoever is using the camera and even maybe a custom set up for different people using it in the same family in case they have varying levels of capability.

The playback area has a similar layout to the recording area. However, the zoom buttons are on the left under the record/playback buttons. A menu button is at the bottom of the screen but there are no direct options flanking it. The menu button brings up 9 options such as deleting, locking, editing and dpof. At the top of the screen is a star rating system so you can prioritise the pictures on the card which aids retrieving them later.

The Nikon Coolpix S100 has 2 main burst modes: high and low. The high setting takes 3 photographs at full resolution in quick succession and manages to do it in under a quarter of a second. Mathematically, this equates to 12 frames per second (fps) although our calculations aren't precise and Nikon state a maximum of 8fps. The low setting has a constant burst rate of around 1.5fps because we got 15 frames in a 10 second test.

There's quite a lot of stuff packed into the box of the Nikon Coolpix S100. There are 2 discs for the reference guide and ViewNX2 software. The quick start guide is a bulky booklet covering 5 languages in just under 100 pages. There's also a mini mains charger for the battery and all the usual leads such as USB and HDMI. If you want to charge the S100 from the USB lead, you have to set the camera up in the main menu.