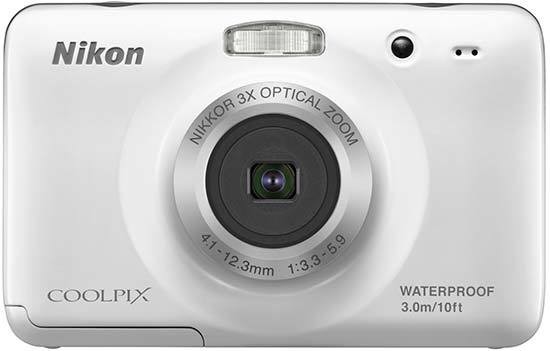 The Nikon Coolpix S30 is an all weather digital compact camera geared towards family life and holidays. It sports full waterproofing to a depth of 3m, is dustproof and shockproof. Easy buttons make it accessible for all the family and creative filters aim to make picture taking fun. However, with a 10 megapixel resolution, 2.7 inch screen and 3x optical zoom, will the average family be able to see past the numbers? The Nikon Coolpix S30 retails for $119.95 / £99.99 / €118.00.

The Nikon Coolpix S30 joins the swelling ranks of waterproof cameras on the market today. The S30 is a mixture of the bulky “obvious” aquatic cameras such as Pentax and Canon release, and the smooth “discreet” aquatic cameras from Olympus.

The smooth and shiny gloss front of the Nikon Coolpix S30 looks like any other camera but look closer and you'll see that the lens is hidden behind a thick piece of glass. The depth from the lens to the protective covering houses the modest 3x optical zoom. A small flash sits in the middle of the camera instead of the side. This is a good idea that's seen on many submarine cameras because underwater, you'll use it two handed. That runs the risk of covering the flash, which just wouldn't do.

The top of the camera gives an indication to the aims of the designers when creating the S30. Three ultra large buttons sit on the top plate spaced comfortably apart. The left button is for video recording without having to enter a mode. In the middle is the power button while the shutter release sits on the right.

The back of the Nikon Coolpix S30 has had a redesign from the standard compact camera layout. Instead of having all the buttons down the right side, there are now some on the left. There's no icons to indicate what they do because it's all on screen. To the right of the screen, the navigation pad is small but chunky. Big enough to rest a thumb on while you're using it.

There's a couple of oddities about the Coolpix S30: Nikon have kept the resolution low. It's a 10 megapixel CCD and although we realise that image quality should be just as good – if not better – than a camera with a higher resolution, we wonder why the decision was made to do this.  The zoom is only 3x optical. The housing envelopes the whole zoom operation so space is a problem, but there are cameras out there that are thinner with bigger zooms. There are options such as moving lens elements or periscope mirrors. The screen is also only 2.7 inches. The back has to house bigger buttons and it's been rearranged so we can see why, but will a customer?

Aimed as an all-rounder that a family can take anywhere, the Nikon Coolpix S30 is waterproof to 3m. That's just under 10ft which is ample for snorkelling, light scuba or simply mucking around in the pool. Interestingly, the shockproofing is only to 0.8m. Comparably, other shockproof cameras have a maximum height of 1.5m which is around chest height of an average adult. That covers most kids and the majority of adults. 0.8m is more like waist height.

The gloss finish looks lovely but coupled with the bulky design, it makes the Nikon Coolpix S30 look a little cartoonish.  On the bottom, the camera has a plastic tripod bush. The battery door has a lock on it to prevent accidental opening. It's interesting to see that the rubber seals have been put on the compartment and not on the battery door.  A plastic catch holds the batteries in place which are AA type. This also sounds a little archaic but Nikon have opted for these because they're so readily available when you're abroad. Pretty much any shop will sell AA batteries. The memory card also goes in the same compartment as the batteries. It's good to see some new technology in there at least. The S30 takes up to SDXC cards for much higher capacity.

Switching the Nikon Coolpix S30 on and it's plainly obvious to see that this is a camera designed for the family. The four buttons on the left of the body have four coloured icons sat next to them on the screen. Pressing any will take you into what looks like a sub-menu but is actually the main menu. The options are extended and reached by scrolling down. The full list of options isn't very long. The four primary options accessible from the main screen are: Change colours, Decorate, Choose a style and Change sounds. The other options lower down are: Flash mode, Self-timer, Choose a size, Movie AF and Set up. To access any of these options press the corresponding button that the mode is in line with. Change colours allows you to adjust exposure compensation, colour and hue. Decorate has five frames that can be positioned around the picture. Choose a style is a renamed scene menu and Change sounds is a fun area that has multiple options of sounds that can be applied to the camera. At the bottom of the screen are two illustrations of the front and back of the camera. You can assign a sound to the operation buttons as well as a different sound to the shutter button.

Initially, the menu seems to be a nightmare because it's so different to what anyone is normally used to. It's laid out differently on purpose to be easier to use and have more of a flow for younger people to understand the controls. The options on the menu are colourful, bright icons and when the page is scrolled through, to select a function or mode, you have to press the corresponding button to the left of the screen. There's no OK button on the S30.
Other buttons that have been moved around are for the zoom. They're now on the back of the camera on the navigation pad. Press up for zoom in and down for zoom out.

From starting up to taking a picture takes just under 3 seconds which isn't a bad performance. Shutter lag sits at around 0.05sec which is admirable although there is some give for reflexes. It still shows as faster than previous generation cameras. There's a continuous shooting mode which is accessed through the Scene menu. We managed to get eight frames in a 10 second period. We got two pictures in the first second and after two seconds it slowed down to a plodding frame every 1.5 to two seconds.

In playback, there are four more menu options accessed in the same way as when you're shooting. The first one is titled: Have fun with your pictures. There are multiple options available such as Changing colours, Highlighting colours, Decorating the picture with frames, Soften, add Starbursts to highlights, add a Fish eye effect or add a Diorama effect. The latter is the effect that makes streets look like toy towns when taken from a higher viewpoint. Changing colours is a simple effect of changing the picture to black & white, sepia or cyan. Highlighting colours will send the picture to black & white while retaining the colour you've selected.

The second option is called View and allows you to select Favourite pictures, arrange Photo albums, create a Slide show, Organise by date, Rotate, Resize, Copy them or determine the order that they'll print. All of these normally have more jargon like names which have been simplified. For example, Resize is now called Small picture.

The third option is interesting. It allows you to Record an audio message, leave a Reply to an existing one, Play all recordings or Erase all the recordings to that picture. Finally, the Erase option has only two options for erasing the picture you're on or erasing all of them.

The Nikon Coolpix S30 takes 2x AA batteries so it only comes with two disposable ones in the box. Rechargeables will last longer. Also in the box, there's a small brush to remove dust and debris, a wrist strap, USB lead, View NX2 software, User manual on another CD and a quick user guide to get you started.