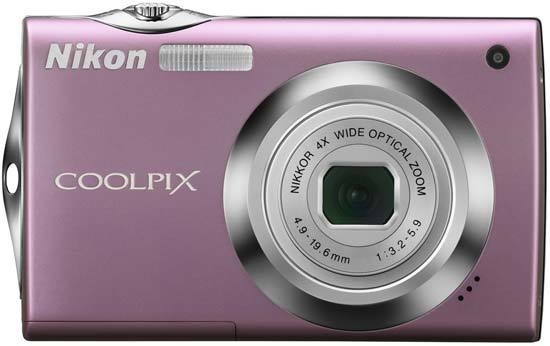 Weighing in at only 131 grams with battery and memory card inserted, the Nikon Coolpix S4000 is a very compact camera. Thanks to its small size and moderate weight, it easily fits into a shirt pocket. In terms of design, it's a good-looking little snapper that successfully blends traditionalism with style. While our review unit came in pink, the Nikon Coolpix S4000 is also available in red and black (plus champagne silver and plum in the USA).

The front plate is dominated by the lens, which sits fully retracted into the body when the camera is powered off, but extends about an inch or so upon power-up. Covering a 35mm equivalent focal range of 27-108mm, it has a maximum aperture of f/3.2 at the wide end and f/5.9 at full telephoto. Like most small-sensor digicams, the Nikon Coolpix S4000 lacks an iris diaphragm. In very strong daylight it employs a built-in neutral density filter to avoid overexposure, but this obviously has no effect on depth of field, as the physical size of the aperture does not change. Notable by its absence is any form of optical / mechanical image stabilisation - this is a glaring omission given that ultra-light cameras like the Coolpix S4000 have little physical inertia and are inherently prone to image blur caused by shaky hands.

The only other parts visible when viewing the camera front on are the flash, the AF assist lamp and the built-in microphone. The flash is a slim little thing that works quite well as a fill light, but obviously won't light up an entire ballroom. The AF assist light doubles as the self-timer lamp, while the microphone is there to record sound with movies as well as voice memos for stills.
The top of the S4000 features a large shutter release surrounded by a zoom lever, and a small power button flushed with the camera's surface. The latter - which can be a bit hard to press due to its size and recessed position - incorporates a tiny LED that lights up when the S4000 is powered up. In the back of the camera we find the large, touch-sensitive screen, a flash / charge lamp and a whopping two buttons: Shooting Mode and Playback.

As you can easily guess, most of the user interaction with the camera is via the 3-inch, 460,000-dot touchscreen, which you can operate with your fingertips as well as the included stylus. In Record mode, you get a number of virtual "buttons" including Flash Mode, Self-Timer, Macro, Info, Touch Shooting and Menu. These are all touch-operated. The full range of flash modes include auto, auto with red-eye reduction, fill flash, slow sync and forced off. Note that the availability of these flash modes varies with the shooting mode and certain other settings. The self-timer options are simpler: 10 seconds, 2 seconds and off. Macro is self-explanatory, while the Info button toggles the information overlay on and off.

The Touch Shooting "button" brings up a small menu with three choices, Touch Shutter, Subject Tracking and Touch AF/AE. Touch Shutter means that touching the screen at any given point of the frame will result in the camera's focusing on that point and immediately snapping a picture upon achieving focus. This is quite a fast way of taking a photo - while focusing speeds are not SLR class, the fact that you can pick a focus point by simply touching the desired part of the frame, and then not have to even touch the shutter release to initiate autofocus and image capture means that the entire picture taking process may actually take less time than with an SLR. On the flip side, enabling this function may cause you to take a few photos involuntarily. By contrast, Touch AF/AE is simply AF point selection by touch, which still requires you to press the shutter release to actually take a shot. Finally, Subject Tracking lets you pick a subject by touch, and allows the camera to follow that subject if it moves within the frame.

Tapping the Menu icon brings up the main menu screen whose content varies with the chosen shooting mode. The shooting modes on offer include Auto, Scene, Smart Portrait and Movie. Somewhat confusingly, Auto is the mode that gives you the most control over the shooting process. No, you don't get to set shutter speed or aperture directly - the latter would be impossible given the lack of a diaphragm anyway - but you can set the ISO speed manually, which is something you cannot do in the other modes. Other parameters that can be set by the user in this shooting mode include resolution and file quality, white balance, exposure compensation, drive mode, AF area and AF mode. These are all buried in the menu - none of them has a virtual shortcut button of its own. Which is a pity, given that some of these functions - like ISO, WB or exposure compensation - are quite frequently used, and the awkwardness of accessing them can be frustrating at times.

Those who'd rather not fiddle with ISO speeds and white balance settings will likely choose Scene instead of Auto. The Nikon Coolpix S4000 offers 17 scene modes plus a Scene Auto Selector that puts the camera in charge and allows it to choose from the six most commonly used scene modes at its own discretion, based on its assessment of the scene in front of the lens. This is the true auto mode, which requires - and allows - the least amount of user control over the picture taking process. Of course, picking a scene mode by hand is always an option.

Smart Portrait is a shooting mode of its own rather than one of the scene modes. In this mode, the S4000 hunts for smiling faces and snaps a photo whenever it detects one. Also, there's a skin softening option that can be used to remove blemishes and other minor imperfections, giving the skin a smooth look in the process. The intensity of the effect can be set to High, Normal or Low. The function can of course be turned off as well.

In contrast to its predecessor the S230, the Nikon Coolpix S4000 is able to record high-definition videos. The resolution is 1280×720 pixels, while the frame rate is 24 frames per second - at least with firmware version 1.0, which is what we had on our review sample. In the meantime, Nikon has released a firmware update that changes the frame rate from 24fps to 30fps. Sound is recorded with movies, but the optical zoom cannot be used while filming. Single or full-time AF may be selected for movies - in the first case, focus will be locked at the beginning of each clip, while in the second case, the camera will keep adjusting the focus while filming, which may cause the sound of the focus motor to be picked up by the microphone. Maximum clip length is limited to 29 minutes. Unusually for a camera that can record HD videos, the Nikon S4000 does not have an HDMI port. This means that you cannot play back your videos on an HDTV simply by hooking up the camera with it.

Videos and stills may be stored either in the S4000's limited on-board memory, or on a separately sold SD or SDHC card (SDXC cards are not supported). Those wishing to shoot HD movies should get a card with an SD Speed Class rating of 6 or faster. The memory card shares its compartment with the supplied EN-EL10 lithium-ion battery. Nikon appears to have made a conscious effort to place the compartment door as far away from the tripod socket as possible, so you might be able to change batteries and memory cards while the camera is mounted on a tripod, but it will also depend on the kind of head and / or quick release plate you are using (my own QR plate was too big, but yours might be different). The battery can be charged via a computer using the supplied USB cable or via the EH-68P AC adapter, using the same cable. Although the battery is removable, it must be in the camera for charging (much like a cell phone battery). The number of images that can be captured on a single charge is about 190, though the actual figure may vary with the amount of flash and zoom usage.

In use, the camera proved to be adequately responsive for its class. Start-up was pretty fast considering the camera has to extend the lens before it can start taking photos. The zoom action can be described as smooth for a power zoom, and the relatively moderate 4x zoom ratio ensures that it doesn't take ages to go from wide angle to maximum telephoto or vice versa. The touchscreen interface requires a bit of getting used to, but at least the S4000 has some physical controls like a zoom lever - unlike the S70, for instance -, which comes in handy. The camera offers gesture support, which comes into play when adjusting a few virtual sliders (think exposure compensation, for instance) and in Playback mode, where you go from one shot to the next by swiping with your finger, much like on the Apple iPhone. Overall, the interface works reasonably well, although I really missed shortcut icons for oft-used functions like exposure compensation, ISO speed or white balance.

This rounds off our evaluation of the features, handling and ease-of-use of the Nikon Coolpix S4000 camera. Let us now move on to the Image Quality assessment.