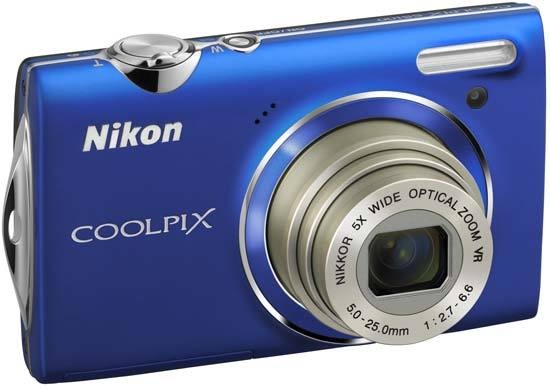 All of the sample images in this Review were taken using the 12 megapixel High JPEG setting, which gives an average image size of around 5.5Mb.

We were using the S5100 during a period in which we were also looking at direct rivals in the Pentax Optio M900 and Olympus FE-5050, and, although the Nikon may not be perfect in every output respect, its images in general terms bettered both, being sharper and also we felt more representative of the scene or subject at the time. Lacking a handgrip as such we had some instances of visible camera shake and resulting blur with the Nikon, despite its low light shooting capabilities (high-ish ISO/vibration reduction) as we did with the competitors. Like the Olympus we also found white balance to occasionally be a tad off - daylight images taking on a bluish tinge - and had to watch out for burnt out highlights and obvious pixel fringing when conditions were sunnier.

In general terms the Nikon's images can look rather muddy at times, particularly when shooting at maximum telephoto and in lower light, benefiting from auto adjustment in Photoshop or simply opting for the vivid mode on the camera itself to boost colour saturation and add visual punch to formerly flat shots. These are minor gripes however and when conditions are ideal the Nikon can deliver some impressively sharp results that belie its budget status. Admittedly at the end of the day you're left with snaps rather than high art, but the S5100 suggests itself as an able tool for the back pocket for reference shots and the like.

Above ISO 400 image noise predictably makes its presence more intrusively felt. At ISO 800 it's beginning to creep into the darker portions of the image, more noticeable across the whole shot at ISO 1600, so that by ISO 3200 detail is noticeably softened overall, albeit with an effect that is marginally les painterly than usual. Not a bad performance from a point and shoot camera by any means, so the S5100 is one of the best examples out there if you have less than £200 to sped on a pocket snapper.

The base sensitivity of the Nikon Coolpix S5100 is ISO 100, while the highest setting is ISO 3200. Here are some 100% crops which show the noise levels for each ISO setting.

The Nikon Coolpix S5100 handled chromatic aberrations fairly well during the review.  The examples below show what you can expect in the worst case.

The Nikon Coolpix S5100 has a very good macro mode, offering a minimum focus distance of 2cms. The first image shows how close you can get to the subject (in this case a compact flash card). The second image is a 100% crop.

The flash settings on the Nikon Coolpix S5100 are Auto, Flash On, Red-eye Reduction, Slow Synchro and Off. These shots of a white wall were taken at a subject distance of 1.5m.

The slowest shutter speed of the Nikon Coolpix S5100 is four seconds in the Fireworks show scene mode, and even less in the other shooting modes, which is disappointing news if you are seriously interested in night photography. The following example was taken at a shutter speed of 1 second at IOS 720. We have included a 100% crop to show what the quality is like.