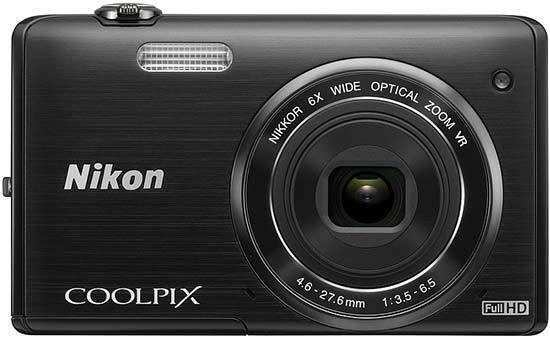 Sheltering under the Style banner of Nikon's digital camera range is the new Coolpix S5200. It's an affordable, smooth, slim digital compact camera with a back-illuminated 16 megapixel sensor, 6x optical zoom lens, 3 inch LCD screen, wi-fi transfer built-in and Full HD video capability. That's just a few of the impressive selection of features on the S5200. In this review, we'll put them to the test and see if the back-illuminated sensor is worth its salt. Available in silver, red, black, blue and plum the Nikon Coolpix S5200 costs £179.99 / $179.95.

If you've never unpacked a Nikon digital compact camera, it can be a little disconcerting. You see, the first thing you find is what looks like the instruction manual which is a thick book full of text. However, look closer and you'll see that it's a quick start guide and is in several languages. The full manual is on the enclosed CD which will be underneath the guide. Also on the CD is ViewNX 2, a basic editing software suite which is powered by ArcSoft.

Fold out the box and the Nikon Coolpix S5200 is joined by a lithium ion battery, wrist strap and video cable. The USB cable doubles up as a charger which plugs into the mains adapter and directly into the camera. This is great if you're off travelling because it means there's less to carry.

The S5200 is a good looking camera. It's shiny and curved at the front with a glossy coating. The 6x optical zoom is off-set slightly from the centre of the body. A small flash sits just under the shutter release button, which is on the top plate. Joining it is the power button and the zoom ring which is wrapped around the shutter release. The power button is flush to the body so you don't mistake it for the shutter.

On the back, the large 3 inch LCD screen takes up a huge amount of space with the rest of the buttons cramming into around a quarter of the entire back section. Nikon have been creative to keep the buttons at a decent size by overlapping them. It jazzes up an other-wise standard design and bolsters the camera's personality. A large dedicated video button sits at the right shoulder. You can use this record button at any time, not just in video mode.

The Nikon Coolpix S5200's sensor is a 16 megapixel back-illuminated type. If you're unfamiliar with that term, it describes the way the sensor is designed. Traditional sensors have rows of pixels on the front and they're all surrounded by circuitry. This imposes on the pixel's ability to collect light and makes them less efficient. A back-illuminated sensor has the circuitry on the reverse of the sensor which opens up the entire pixel to the available light. This means lower ISO in lower light situations and smoother images. With all the circuitry on the back, the sensor looks as though it's been fitted backwards, so the back would be getting all the light when exposing – back-illuminated.

For the travelling photographer, storage of the pictures can be problematic. Do you get several smaller cards in case of card corruption, or get just one big card in case you lose one? The S5200 has built-in wifi, so you don't need to worry.  Once you're in a free wifi zone, the camera will send your pictures to a place of your choosing such as your computer or social media. The camera also works with Eye-Fi memory cards.

The Nikon S5200 uses an EXPEED C2 processor to get the pictures onto the memory card from the sensor. It's difficult to get any technical data on processors as they're manufacturer's most treasured intellectual property, so they're kept secret. C2 processors are found on smaller Nikon digital compact cameras.

While the camera doesn't feel flimsy, we couldn't help but handle it with kid gloves. Maybe it was the slippy covering or maybe it was the bright colouring. Whatever it was, we found ourselves gripping onto it tighter than other cameras. The battery lid is a slide-to-open type with no lock. Despite this, it's not easy to open, so shouldn't present any problems. It does have a bit of flex in it when manipulated.

The screen on the S5200 is a 3 inch TFT LCD with 460,000 dots. Now there's been a bit of a mix up in the past with dots and pixels. You see technically, there's three dots to a pixel, so the 460,000 dot screen should be 153,333 pixels – which isn't much. However, CIPA guidelines a few years ago changed the rules to state that both dots and pixels meant the same thing. So now, the 460,000 dot screen is in fact 460,000 pixels. Much better. It's very nice and clean with bright colours and sharp edges. It suffers no motion blur or purple banding when put in front of a light.

There are two menus on the Nikon Coolpix S5200. The Scene menu is a straightforward, easy-to-use system that has nice, large icons so they can be navigated quickly for different shooting scenarios. Press the green camera button and the Scene menu opens up on screen. You're then faced with four options: Auto, Scenes, Digital filters and Smart portrait. For everyday shooting, it's likely that you'll keep the camera in Auto mode as it will be able to cope with pretty much every scenario you find yourself in. Should you need a specific response from the camera, for example you may be shooting in a museum or on the beach, then the Scenes option will be able to deal with up to 20 situations.

For those of you that have a zany side, the Digital filters will be right up your street. You can choose from 12 filter effects such as Soft focus, Vivid colour, High key, Painting, two Toy camera effects and – arguably the best – Cross process. The latter will not only apply a colour to the image to give it the feeling it's been cross processed (in the days of film, cross processing involved developing a colour negative film in slide film chemicals or vice versa. It would produce interesting and random colours), but you can also choose from four colours.

In the Main menu, the options are split into three sections and where you go depends on the action you wish to perform. To change settings to the way the camera records pictures, you need the first tab you're on when you open the menu up. For Video, you need the next tab down and the final tab holds the Setup pages. The latter being the more core features of the camera such as the languages, date&time, wifi and formatting options.

Start up time from cold is pretty good, shaving off around a third of a second from the standard average of 2.5 seconds. There are several continuous shooting modes on the Nikon Coolpix S5200. Continuous Hi takes seven images in around half a second. It then takes 10 seconds to download them onto the card. Great for that skateboard grind down the hand rail, but not if there's more than one person doing it in succession. There's also a Continuous Lo will take a full size images at a fast rate of around 2.2fps. We managed to get 22 shots in just outside a 10 second time period (it was less than half a second outside, so taking reflexes into account we gave the camera the benefit of the doubt). If you want super fast images, you can choose the 120fps or 60fps options, but the resolution is dropped to VGA (approx. 300,000 pixels) and 1 megapixel respective.

Switch the Nikon Coolpix S5200 into playback mode by pressing the arrow button on the back either when the camera is on or off. When powered down, it'll need to be held down to confirm it's not an accidental push while in a bag or pocket. Images are displayed full size as default with a simple information layout that will disappear after a few seconds. Pressing the OK button in the centre of the navigation pad and you can alter the look of the picture by adding any of the digital filters. That's great news if you take a picture and wish you'd added a filter or if you simply didn't have the time to get it initiated in the menu.

The other good news is that the Nikon Coolpix S5200 shows a really small thumbnail preview, but for some reason pressing down doesn't navigate through the list, you can only go left or right. If you change your mind, press the Menu button and confirm you'd like to leave. The Playback menu is a little over two pages long. It offers options such as D-Lighting (a dynamic range boost to increase detail in shadows and cap burn out on highlights), Quick retouch, Slide-show, Rotate, Copy or add a Voice memo. The Setup menu is also available should you need it.