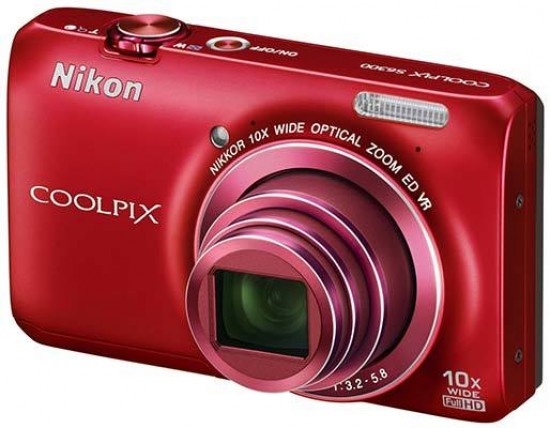 Nikon seem to have gone off at a bit of a tangent with the release of this new range of digital compact cameras. Take the S6300, for example. Nikon usually make good looking cameras for the S (stands for Style) range and this is no exception. It's curvy in the right places with sharp angles on the edges. But Nikon have taken the seriousness out of their cameras. Where there was once a picture taking machine, now stands a bubbly little camera with fun options and a rainbow of colour options.

Saying that, looking at the S6300's specification shows a side to the camera that Nikon are keeping hidden. Underneath the body is a multitude of features aimed at making sure that any pictures you take will be the best they can be. Features such as the 10x optical zoom, which has ED glass for sharper images straight from the camera and Vibration Reduction technology to keep pesky moving objects as still as possible. This also works wonders for using the macro feature at full telephoto. It throws the background completely out of focus and thanks to the VR, it's nice and sharp. Take a look at the sample pictures for proof.

The zoom doesn't quite fit into the Nikon Coolpix S6300's slim body because the front curves out slightly to meet the lens bezel. A small flash sits over the lens towards the left of the camera. On the top, the power button is small, sits flush to the body and is colour coded. A small blue light circles it when powered on so you can see it in the dark. Located next to that is the shutter release which has the zoom ring wrapped around it. The blue light also makes sure you don't press the power button instead of taking a picture.

The back and bottom of the Nikon Coolpix S6300 give a slight indication of the price range that it's been placed in. On the back, the screen is large but not flush to the body indicating a lower quality screen. To the bottom, the plastic tripod mount shows a drop in build quality. Let's face it, if you're looking to buy a camera at this price, you're unlikely to be too bothered about these two points, and why should you? You'll probably use the tripod mount rarely and the screen still does the same job but keeps the price of the camera down. Expect to pay twice as much for a flush screen.

The S6300 is a little noisy when it's switched on. However, it's fast which will be great for family shots of the kids. To the right of the screen are the control buttons. At the top is a direct video record button. You can shoot video without coming out of a photographic mode first. Directly below that are the scene mode and playback buttons. The navigation pad is also a snazzy wheel for speedy navigation of the menus or scrolling through the pictures you've already taken. At the bottom, the last two buttons give access to the main menu or deleting pictures you don't want.

In the hands, the Nikon Coolpix S6300 has a bit of weight to it and it feels nicely balanced. This is a camera that's currently running at around £140 so don't expect miracles. It has a plastic tripod socket but the other areas that make a camera vulnerable are quite well protected. The HDMI slot has a plastic cover instead of a rubber one. The battery door could do with a separate lock but at least it has some reinforcement.  Other areas of the camera seem well built. Although the lens is noisy when zooming in and out (which may cause issues during video recording), it's smooth and there's virtually no play in it when extended.

The menu system is the typical dark grey background with a lighter grey menu and yellow highlighter. It's very easy to use. The tabs on the left can be used by pressing left to choose between shooting, video and set-up. Alternatively, the wheel can be used to scroll through the options available.

A Scene menu has been placed separately which can be accessed by pressing the green camera button. This allows you to select different modes to put the camera into such as Auto, various Scenes, Digital Filters (Soft, Sepia, High Contrast Mono, High Key, Low Key and Selective Colour), Smart Portrait and Subject Tracking. Amusingly, the latter option is ideal for taking pictures of kids and is signified by a target icon.

If you're in a rush, the Nikon Coolpix S6300 can start up from cold and take a picture in around 2.5 seconds. However, our tests proved that the camera wasn't always hitting focus during that time. To ensure a sharp picture, you have to wait anything up to 3.5 seconds.

The S6300 has a number of continuous shooting modes. The High speed continuous takes a stream of pictures recording seven full size images in 1 second (7fps). The Low speed continuous mode will plod along steadily at around 2fps (frames per second) until the five second mark when it slows down to around 0.5fps. Pre-shoot Cache takes a couple of shots in advance so that you don't miss the vital moment. There's also a couple of ultra high speed continuous modes. One records at 120fps in VGA mode (usually around 300,000 pixels) while the other records at 60fps. The file size for that is 1 megapixel.

Playback can be accessed either with the Nikon Coolpix S6300 on or off. If the camera is off, simply hold the playback button down and the pictures you've taken will come onto the screen. Interestingly, there's no option to rotate through the viewing options. Generally, a camera will have more than one option for viewing the pictures, for example: Information, No information and/or Histogram. So with the S6300 there's one way to view the pictures which also displays the file name, date/time, image number, resolution and battery life. There are four stages to zoom out. The first three will change the display to a thumbnail gallery from a slide show and will display more thumbnails per row with each stage. The final setting uses a calendar to flick through pictures taken.

In the box there's a video cable, USB cable that connects to the charger unit to plug into the wall.  You can use this to plug it straight into a computer at an internet cafe to upload your pictures (with permission, obviously). There's a full reference manual, View NX2 image software and a multi-lingual Quick Start guide accompanying the camera in the box along with the rechargeable battery.