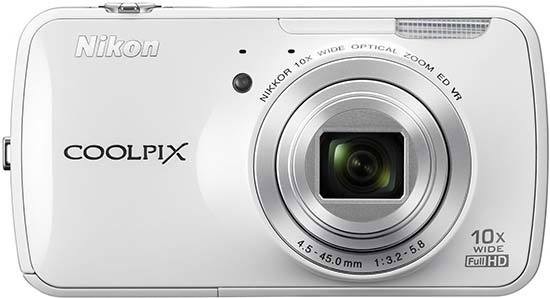 The Nikon Coolpix S800c is the first ever camera to use the Android smartphone operating system. The S800c is also Wi-Fi enabled with a 16 megapixel CMOS sensor, 10x optical zoom, built-in GPS and a 3.5-inch OLED touchscreen. The 25-250mm Nikkor lens has Vibration Reduction, while the S800c allow users to upload photographs and movies to their social networks, including Google+, Facebook and Twitter. The Nikon Coolpix S800c is available in white and black for a suggested retail price of $349.95/£379.99.

Is it worth spending £379 on a camera that offers nigh identical handling to your smartphone, yet cannot make phone calls unless you're within reach of a wireless Internet connection of sufficient strength and are using Skype? That's the conundrum at the heart of Nikon's Coolpix S800c. It's the first camera to market powered by an Android 2.3 'Gingerbread' Operating System, as originally witnessed on your mobile phone. It's a direct rival for Samsung's £399 Galaxy Camera that uses a newer (but Nikon would argue less tried and tested) OS in Android 4.1 'Jellybean'. Yes, we're not massive fans of the cutesy names either.

Whereas Samsung's model benefits from a huge 4.8-inch touch screen at the rear, the Nikon's 3.5-inch variety - also touch sensitive and instantly responsive - is teeny by direct comparison. However it does mean the camera overall is smaller and more portable, so it's swings and roundabouts.

Nikon tells us the core target audience for its S800c is users aged 17 to 35, who, theoretically, will be well used to smartphones as an everyday accessory and will therefore find this camera an easy 'step up' device. It's not exclusively a case of 'if you can't beat 'em, join 'em' then, honest.

Like a smartphone the admittedly stylish Nikon's Coolpix S800c provides the ability to be able to download and run various Internet sourced applications, from photo related 'apps' such as Instagram to ubiquitous online game Angry Birds. Indeed its manufacturer has equipped the camera with a large (for a camera) memory, with 1.7GB partitioned for photos and video and 680MB given over to supplementary 'apps' with which to personalise it.

Like Sony's newest NEX-6 and NEX-5R models that also offer Wi-Fi, you can in effect 'build' your own camera via the available apps, some paid for, others free of charge. The Nikon also offers compatibility with Bluetooth devices and has a built-in GPS antenna for the tagging of images; the latter would at one time have been big news in itself but feels slightly like background noise here.

In terms of headline camera features, the S800c fields a 16 effective megapixel resolution from a 1/2.3-inch BSI CMOS sensor and incorporates an Expeed C2 image processor. The focal reach here is the equivalent of a respectably broad 25-250mm in 35mm film terms, or a 10x optical zoom. Light sensitivity runs from a manually selectable ISO125 to ISO3200, while video capture is the Full HD 1920x1080 pixels at 30 fps and with stereo sound, for which the zoom can be utilized once recording has commenced.

It's worth mentioning though that the screen here is an impressively high 819k-dot resolution anti reflective OLED display rather than the bog standard LCD, which on our sample at least made it seem as if we were looking at a high definition video feed rather than a photo realistic replacement for an optical viewfinder.

From the front though the Nikon's Coolpix S800c resembles your typical point and shoot camera, if a slightly elongated handset-sized one. We had the sensible matt black version in for review, though a glossy white is the alternative, which in our opinion is more striking still.

With a tapering window housing the flash ranged top right and a stereo microphone located top left of lens with small porthole for AF assist/self timer lamp just below, the retracted 10x zoom lens dominates, and, while there is room for some form of handgrip to the far left, Nikon has opted for aesthetics over practicality. So instead of any grip we get a pebble-smooth surface instead.

Looking down on to the camera's top plate we see the Nikon's Coolpix S800c's largest control is the shutter release button, here encircled by a lever for operating the zoom, the lip of which juts forward sufficiently to catch the pad of the forefinger. Set level with the surface of the top plate is an on/off button with central green LED, while the top is bereft of the usual GPS antenna bump that usually signposts a camera with this feature.

When you first lift the camera from the box, because there's the Android operating system to deal with, rather than the regular camera interface, there's a big of rigmarole to go through. This involves either setting up a Google account or logging into a pre-existing one. A virtual on-screen Qwerty keyboard is provided for users to do this. It's frustrating though if you're eager to get straight down to the business of taking pictures.

It also took a little while for our camera to establish a wireless connection even though we were sitting in front of our router; suffice to say it was 20 minutes of faffing about before the camera was up and running as we hoped it might have been from the get go. Half press the shutter release button on this camera however and thankfully it's much quicker to respond than our dozy HTC smartphone, while a full resolution, maximum quality image is committed to memory in around two seconds.

Should you wish to turn the Nikon's Coolpix S800c off, you of course press the top plate on/off button - but unless you disable the feature you'll be asked every time whether you wish to place it on standby, as one would a phone, which necessitates a further button press.

The screen that the S800c presents us with initially on powering it up offers a sparse looking five operational icons - as with your phone it doesn't automatically default to picture taking mode, unless you were using it in that mode before you last turned it off.

First among these icons and moving through them on screen from left to right is a shooting mode. Next up is playback, the third mode is for uploading images to a smart device, a fourth is for Internet browsing, while the fifth is for 'settings' - set up mode in other words. A neat feature aiding viewing is that if you turn the camera on its side to shoot portrait fashion, the display also rotates so that it is always shown the right way up.

It is via the 'settings' menu that we activate or disable the likes of Wi-Fi and Bluetooth connectivity or specify devices to connect with, while, like your mobile phone, there's also an airplane mode. Sound, display and location and security settings are also to be found here.

To the right of this on-screen display, located on a side bar, are three further shortcut buttons: again for shooting and playback, with a third unmarked one slotted in between. Give this a finger tap and the most smartphone-like display is revealed, showing 18 pre-loaded applications that fill the screen entirely and will be familiar to anyone with an Android phone, such as one from the HTC range.

While it's easy enough to begin intuitively navigating the Nikon's Coolpix S800c's settings with a finger tap or swipe, ideally on a normal camera we'd want some of the icons slightly larger than they might appear on your phone - even if we can't fault the screen's responsiveness to each to our actions. As with reviewing images on your smartphone, if you want to view a chosen shot larger you can do so with a flick of the fingers, or make it smaller with a pinch.

If we select shooting mode we are presented with a screen offering six options. From top to bottom and left to right these are an easy auto mode, regular auto mode, scene mode, special effects mode, Nikon's regular smart portrait mode and lastly movie mode. As there is no dedicated red video record button on this camera, users have to navigate their way to this setting to commence filming. As the screen is presented in 16:9 widescreen aspect ratio, black bands naturally crop left and right when taking 4:3 aspect ratio photos rather than video.

On the left of screen in auto stills mode there is a brief toolbar showing exposure (+/- 2EV), macro focus, self timer (two secs, 10 secs, off) and flash options (auto, auto with red eye reduction, off, fill flash, plus slow sync), while bottom right of screen we're provided with an indication of the resolution selected and number of shots remaining. Easy auto mode is 'easier' in that does away with the macro option.  We also usefully get a little miniature thumbnail of the previous shot taken shown bottom right of screen when in capture mode. If we give this a tap, said image enlarges so we can view it properly. So far, so intuitive.

Although it isn't immediately obvious, the Nikon's Coolpix S800c additionally offers a touch shutter function, whereby tapping the OLED screen will take a shot. The scene mode options here are brief but offer up all the essentials, with the line up comprising snow, sunset, dusk/dawn, night landscape, close up, food, fireworks, black and white text, backlit photograph, easy panorama - hold down the shutter and pan and the camera stitches together the image for you - plus a dedicated setting for pet portraits.

The special effects mode options are limited to soft, sepia, high contrast monochrome, high key or low key settings - though of course you can add your own toy camera-like apps as and when wished in due course.

To the right of the Nikon's Coolpix S800c's screen are three hard keys - a back/return key, a home key and a menu button - all of which are self-explanatory.

While the left hand flank of the camera if viewed from the back is devoid of any controls entirely, on the right side we find separate covered ports for an HDMI connection and USB output - the latter being used not just for hooking the camera up to your PC as an alternative to using its wireless facilities, but also recharging the camera.

It's worth flagging up the fact here that the S800c's supplied EN-EL12 lithium ion rechargeable battery is charged within the camera rather than via a standalone charger, with a USB lead and adapter plug into which one end slots provided. But as the camera can manage a meagre 140 shots from a full charge - roughly half of what we'd expect from non Android OS snapshot cameras - you might want to charge up a spare in advance anyway.

The base of the Nikon's Coolpix S800c meanwhile features a screw thread for a tripod just left of centre, while a catch protected cover protects the joint battery and SD memory card compartment, which is pretty much as you'd expect to find on any conventional snapshot.

So what of the pictures you can actually take with theNikon's Coolpix S800c? Do they better what you can achieve with your smartphone, or even a standard issue snapshot costing half of what the S800c does? Read on to find out…